EMI DOES THE TRICK AS THE CHERRIES PROGRESS

Emi Marcondes plundered a hat-trick as AFC Bournemouth eased into the fourth round of the FA Cup thanks to a 3-1 win over perennial giant-killers Yeovil Town.

The Glovers’ proud record of having claimed 21 Football League scalps as a non-league club – including the Cherries – never looked like being added to at Huish Park.

Marcondes opened the scoring in the 19th minute before doubling their lead on the stroke of half-time, both goals exceptionally well taken by the Dane.

And although Joe Quigley profited from a mistake by Orjan Nyland to reduce the arrears early in the second half, Marcondes put the tie to bed 20 minutes from time.

Nathan Moriah-Welsh was handed his professional debut as Cherries head coach Scott Parker made a raft of changes to his starting line-up.

Jaidon Anthony was the sole survivor from the team which triumphed 3-0 against Cardiff City in the Cherries’ final game of 2021. Teenage defender Tarik Gidaree, another product of the club’s academy ranks, was one of nine substitutes, the Cherries bench including goalkeepers Mark Travers and Will Dennis.

Dale Gorman was fortunate to escape with just a yellow card following a dreadful lunge on Morgan Rogers inside the opening two minutes.

Referee Jeremy Simpson showed a great deal of leniency after the Yeovil midfielder had gone over the top of the ball and caught the Manchester City loan player.

Matt Worthington was booked for an innocuous challenge on Jamal Lowe before Gorman’s free-kick from 25 yards sailed over the crossbar.

Marcondes opened the scoring with a well-crafted goal after 19 minutes, the midfielder picked out by Mepham’s raking pass from deep.

The Dane took a lovely touch to control the ball before holding off Dan Moss and squeezing a right-foot shot past the despairing dive of Dillon Barnes and into the corner of the net.

His goal sparked a flurry of chances for the visitors with the Glovers fortunate not to fall further behind as the Cherries asserted. Lowe went close to adding a second when his delicate shot from just inside the 18-yard box deflected narrowly past the post before the woodwork came to Yeovil’s rescue.

Anthony saw Barnes off his line and tried his luck with an audacious effort from near the touchline which came crashing back off the upright with the goalkeeper beaten.

Gorman went unpunished after cynically hauling back Marcondes as he looked to spring another attack before Tom Knowles blazed high and wide from distance.

The Cherries doubled their lead on the stroke of half-time after Anthony’s defence-splitting pass had found Marcondes who timed his run to perfection.

And he gave Dillon no chance, his first-time strike across the goalkeeper nestling in the opposite corner to give the visitors a deserved interval lead.

However, the hosts were gifted a lifeline when Cherries goalkeeper Nyland made a mess of dealing with a Mepham backpass at the start of the second half.

The Norway international dwelled on the ball for too long, allowing Yeovil frontman Tom Knowles to close him down and make a challenge.

And after the ball had popped out invitingly to Quigley, the former Cherries striker rolled it into an unguarded net to halve the deficit.

Marcondes then required a lengthy spell of treatment having been caught by Luke Wilkinson, the Cherries player unhappy no action was taken against the Yeovil skipper.

Marcondes was again in the wars when he came off worse following an accidental collision with Josh Saunton before Moss took a blow to the head after being caught unintentionally by Pearson.

Lowe saw one shot charged down by Wilkinson before a second was superbly saved with his left foot by Barnes, the Yeovil goalkeeper foiling the frontman after Mepham’s pass had put him through. 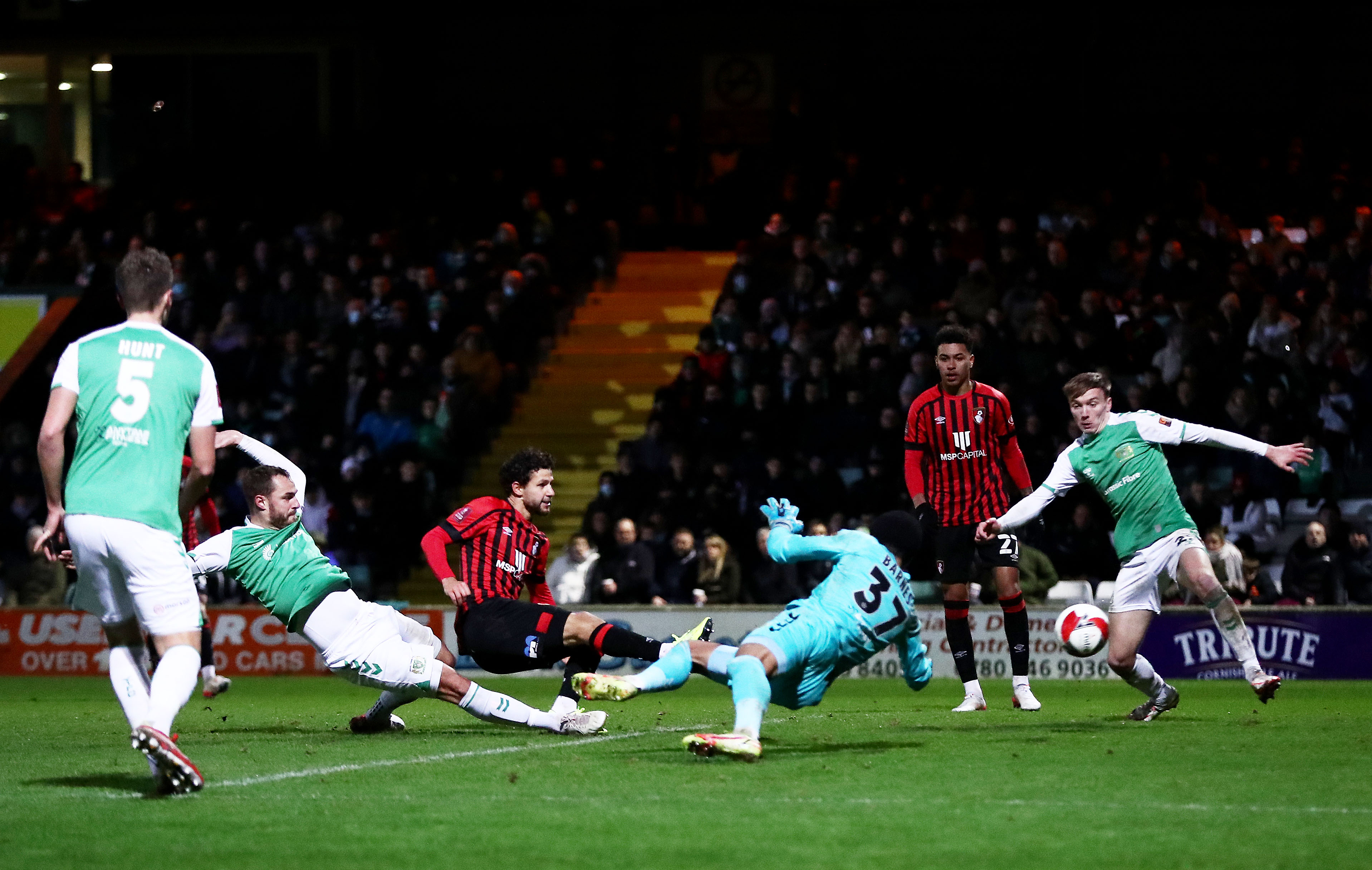 Marcondes was on hand to complete his hat-trick in the 70th minute after the luckless Lowe had again been thwarted by Barnes.

Teed up by Moriah-Welsh, Lowe’s initial effort was parried by Barnes, but the goalkeeper could only steer the ball to Marcondes who fired home from six yards.

Zeno Ibsen Rossi’s important clearance prevented Charlie Wakefield’s cross from reaching Quigley before Jordan Barnett nipped in ahead of Lowe as he prepared to pull the trigger late on.

An heroic clearance from substitute Brennan Camp prevented Reuben Reid from pulling a goal back with the last kick of the game, Yeovil's pleas for a penalty for handball falling on deaf ears.