A Championship debut for this man 👏 pic.twitter.com/k0538xdCeZ

Thumbs up from the gaffer 👍

Great to have your support on the road once again 👏👏 pic.twitter.com/0Uxx2s4iEH

What a win away at the City Ground.

Thank you ever so much for joining us this afternoon, as the Cherries come away with all three points.

We'll be back on Wednesday evening as we travel to Birmingham.

Have a great weekend and thanks for following!

Second change of the afternoon: 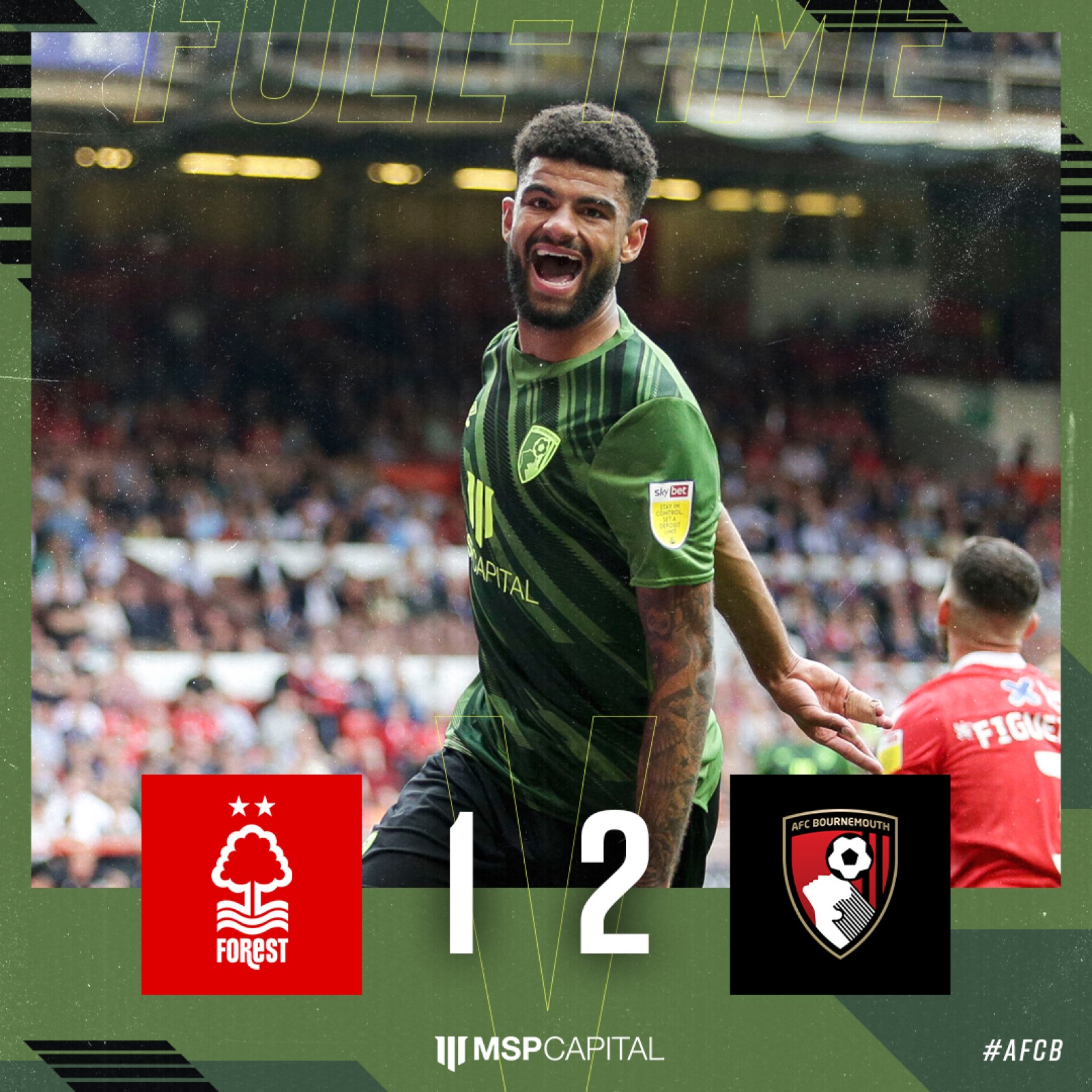 A big three points away at Forest!

Goals from Brooks and Billing either side of half-time secure the win, but the Cherries had to dig in...

A second yellow card for Brooks meant that visitors had to play the final 30 minutes with ten men - he'll serve his suspension at Birmingham on Wednesday, but it didn't matter on the day!

A second change from Scott Parker...

McKenna swings a deep free-kick into the box, but there comes Travers to punch it away and the danger is diverted.

Almost an immediate impact for Davis!

He is released down the right and looks for Solanke in the box, but the ball is just too far in front of him and the forward can't poke it home!

It just needed a touch! So, so close.

Kilkenny wins it back...

Kilkenny does really well to steal the ball and keep control of it in midfield.

He plays it into Anthony, who shoots from 25 yards, but it doesn't trouble the 'keeper.

As for Forest, Colback is off and Carvalho is on.

Marcondes has worked so hard this afternoon, but is being replaced by Davis, who comes on for his Cherries debut.

The flag is up for Forest!

Grabban stretches rather athletically to get his head on the end of a cross, which looked like it went over the line, but the Cherries are relieved to see the flag go up for offside.

Moments later, Mighten then works himself into a shooting position, but it goes over the bar.

The hosts are really pushing...

Up one side, it's Anthony who clears for the Cherries, while Zemura does the work up the other flank. 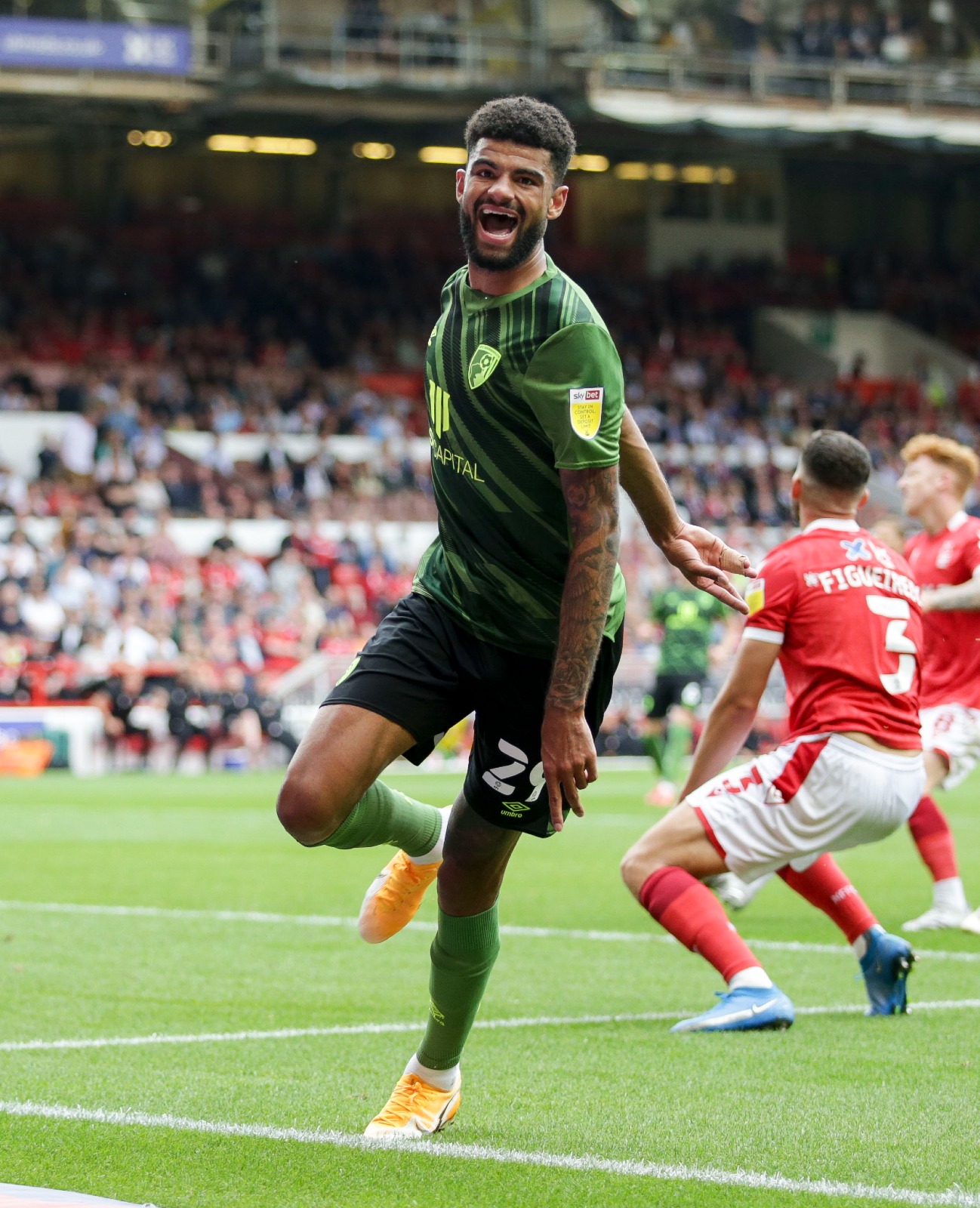 Billing puts us back ahead, after a lovely ball through by Anthony.

Mighten replaces Lolley in the hosts' first change of the afternoon.

It's in the back of the net but the flag is up!

Billing plays in Zemura really smartly and he picks out Anthony, who bundles it into the goal...

But the flag goes up for an offside against Zemura!

It looked close but probably the right decision.

He stretches to block a Forest shot and looks in a little pain...

After some treatment, he's back to his feet and looks like he could be okay to continue.

Brooks is shown a second yellow card and is dismissed!

He pulls back Osei-Tutu in the Forest half and the referee doesn't hesitate!

Anthony slips in Billing on the left and his shot beats Samba at the near post!

That one was right in front of the travelling away support! 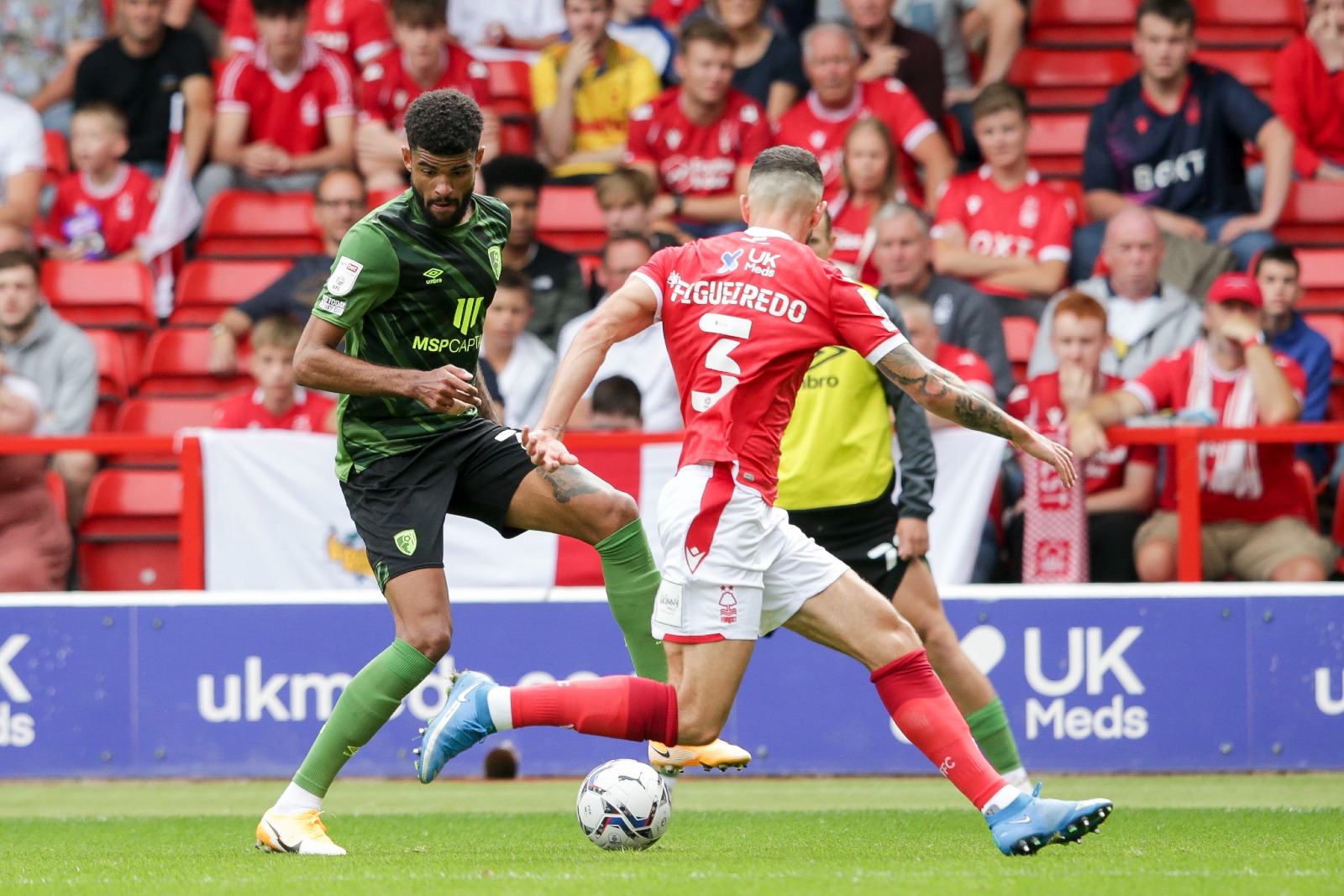 Both teams are exchanging possession, but no real chances for either side in the last five minutes...

The Cherries looking to respond...

Marcondes gets in down the right and picks out Solanke in the box, but the cross is just behind him and he can't direct it on target.

McKenna gets on the end of Zinckernagel's free-kick and heads home to equalise at the City Ground.

Marcondes gives it to Anthony, who slaloms his way into the box...

The winger has a go, but the shot goes over Samba's goal!

No changes for either side as it stands...

A goal to the good at the break 💪 pic.twitter.com/0svKcWMEJG 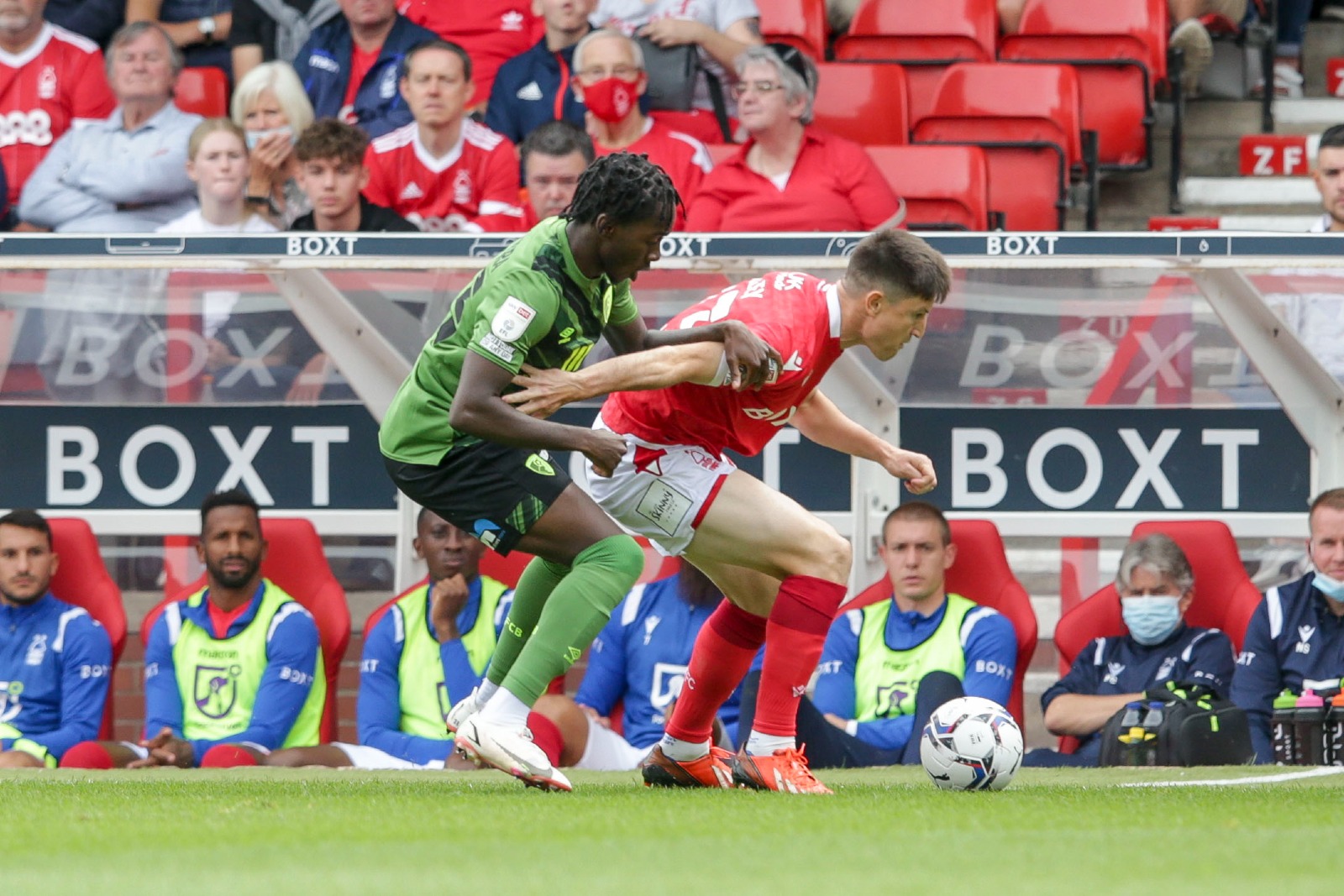 We have the lead at the City Ground at half-time, but stay tuned for updates over the next hour as we look to secure all three points. 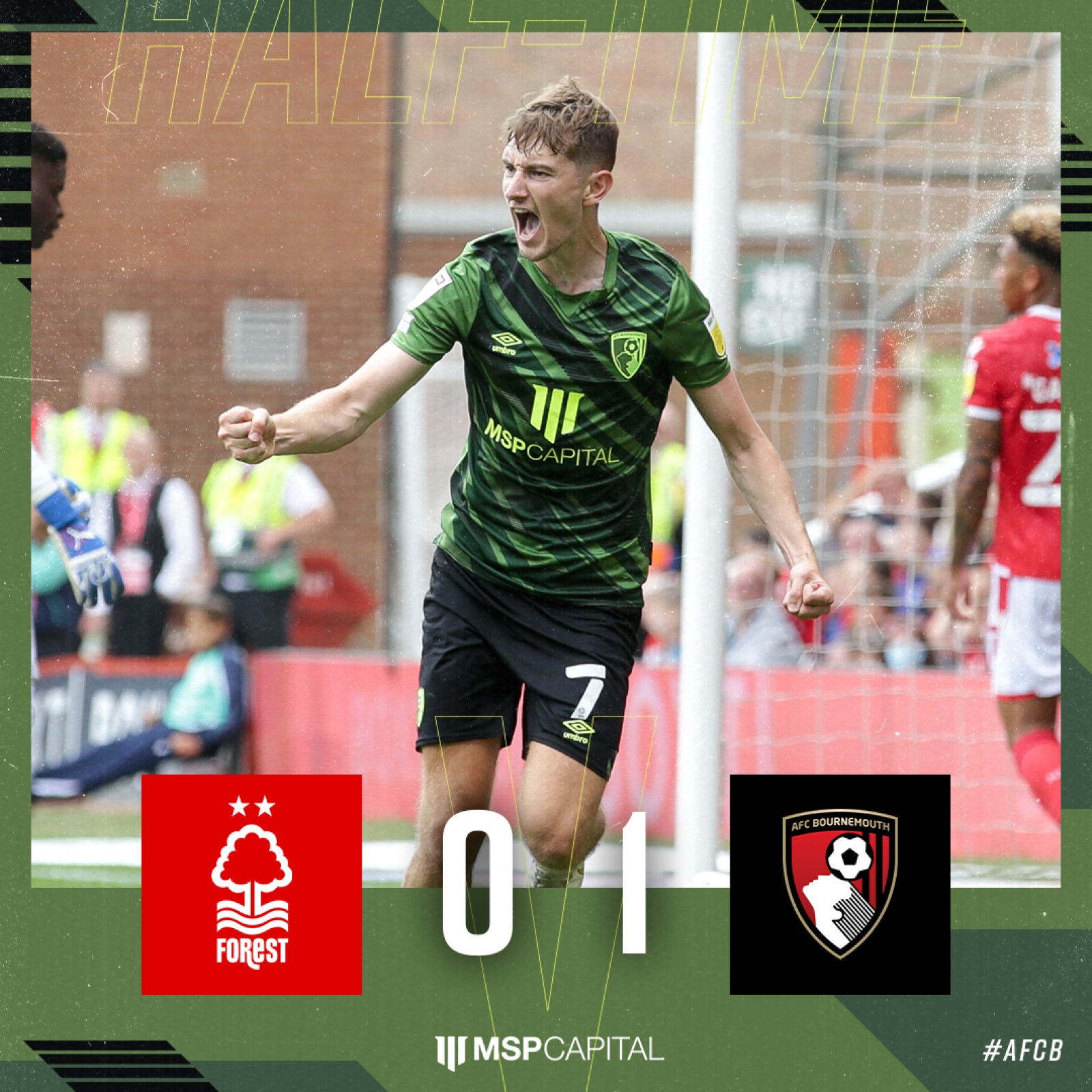 David Brooks' strike just before the half-hour mark is the difference at the break.

Forest have gone close, with Yates' shot from range rebounding off the post, but they are yet to find a way through at the City Ground.

A double chance for Forest as the ball comes into the box...

Firstly, Taylor has a go and Travers parries it away, before it comes back out to Figueiredo. He has a go on the volley, but it's blocked en route to goal.

A goal to the good! 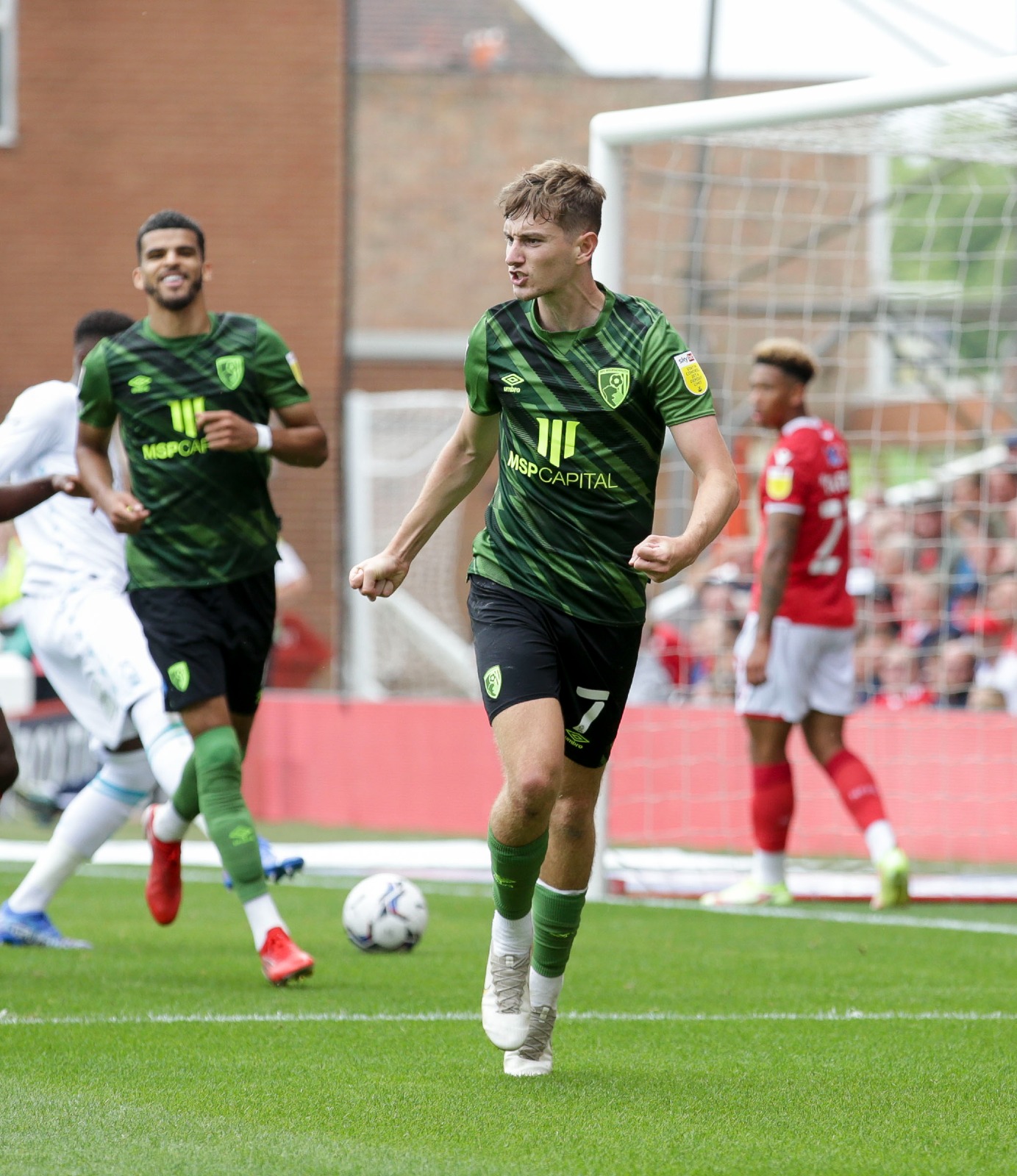 Brooksy firing us into the lead!

Kilkenny gives it away to Yates and he drives forward through the midfield.

The shot then comes from 20 yards out and rebounds off the post, trickling just outside the goalline.

A big chance for the hosts.

Brooks into the book now...

He brings down Osei-Tutu out on the left and is shown a yellow card...

The eventual free-kick goes into the box and Solanke is there for the second time this afternoon to clear!

Just before, Anthony had done well to tee up Billing on the left, with his lifted ball into the box going out for a corner...

Marcondes had gone over to take it, but it was low and straight to a Forest player!

Brooks plays a delightful one-two with Solanke and receives it back inside the area. He has a go and unleashes a shot and Samba can't do anything about it!

It's the side's first real chance of the game, but we've taken it and we're ahead!

Solanke has a shot...

The striker has it on the outside of the area and shoots low. Marcondes was out to the right and looked to be in a good position, but a corner is won and the Dane will take it.

After a tussle at the back-post, Forest head it clear and have it in the midfield.

Anthony plays in Zemura down the left after he made the run beyond the winger...

The full-back fizzes a low ball into Billing and he forces Samba into a superb save from closer-range.

Mepham goes into the book...

He was given a warning earlier on after the referee played an advantage on a Forest attack...

A foul on the halfway line is his second of the game and the referee issues the first yellow of the afternoon.

Taylor swings a cross in from the right-hand side and Kelly isn't sure where it's going so clears the danger for a corner...

Zinckernagel goes over to take it, but Travers comes to claim.

Lolley is brought down by Kelly on the right, around five yards outside the box...

Colback takes it, but it's headed away by Marcondes and goes for another corner.

From that corner, Lolley's shot is well blocked by Anthony.

Forest have it in the Cherries half, but it's won back and Brooks emerges with the ball. He goes on a marauding run through the centre of the park, before being brought down but the referee says it's a fair challenge!

The ball is retained and goes out to Billing on the left, but his low cross doesn't trouble Samba in the Forest goal and he collects easily.

Zinckernagel takes it from the left-hand side, but Solanke of all people is there to head away!

The Cherries have it back and Kelly is in possession as the visitors just look to keep the ball...

Zinckernagel stands over it and has a go from about 20 yards, but it doesn't trouble Travers and flies straight over.

Nottingham Forest get us started and already have a dangerous free kick!

Kilkenny brings down Johnson on the edge of the area... 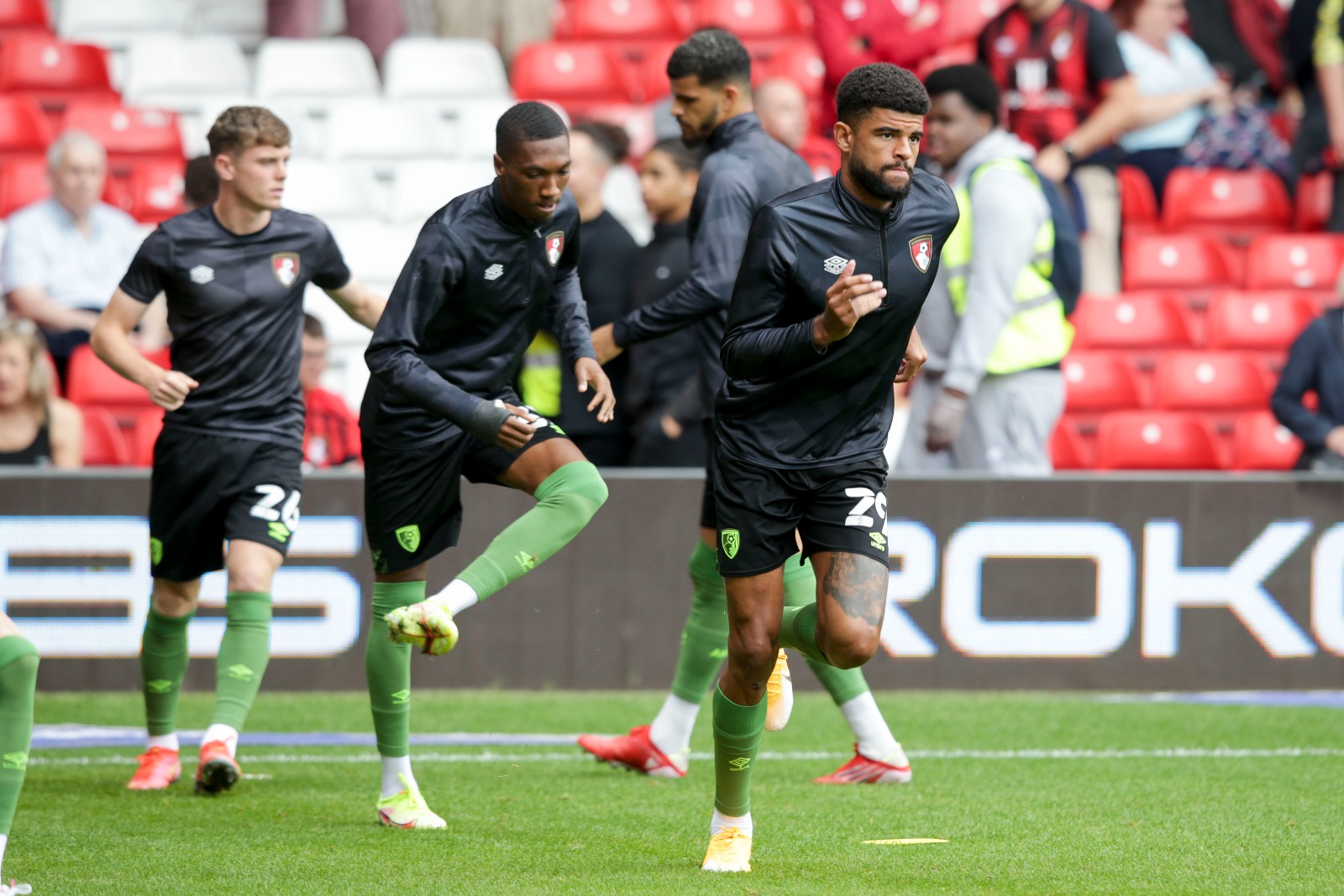 The warm ups are done and we're moments from kick-off.

Stay tuned for all the updates or buy live audio commentary for £2.50 on afcbTV Live.

Away fans are back! 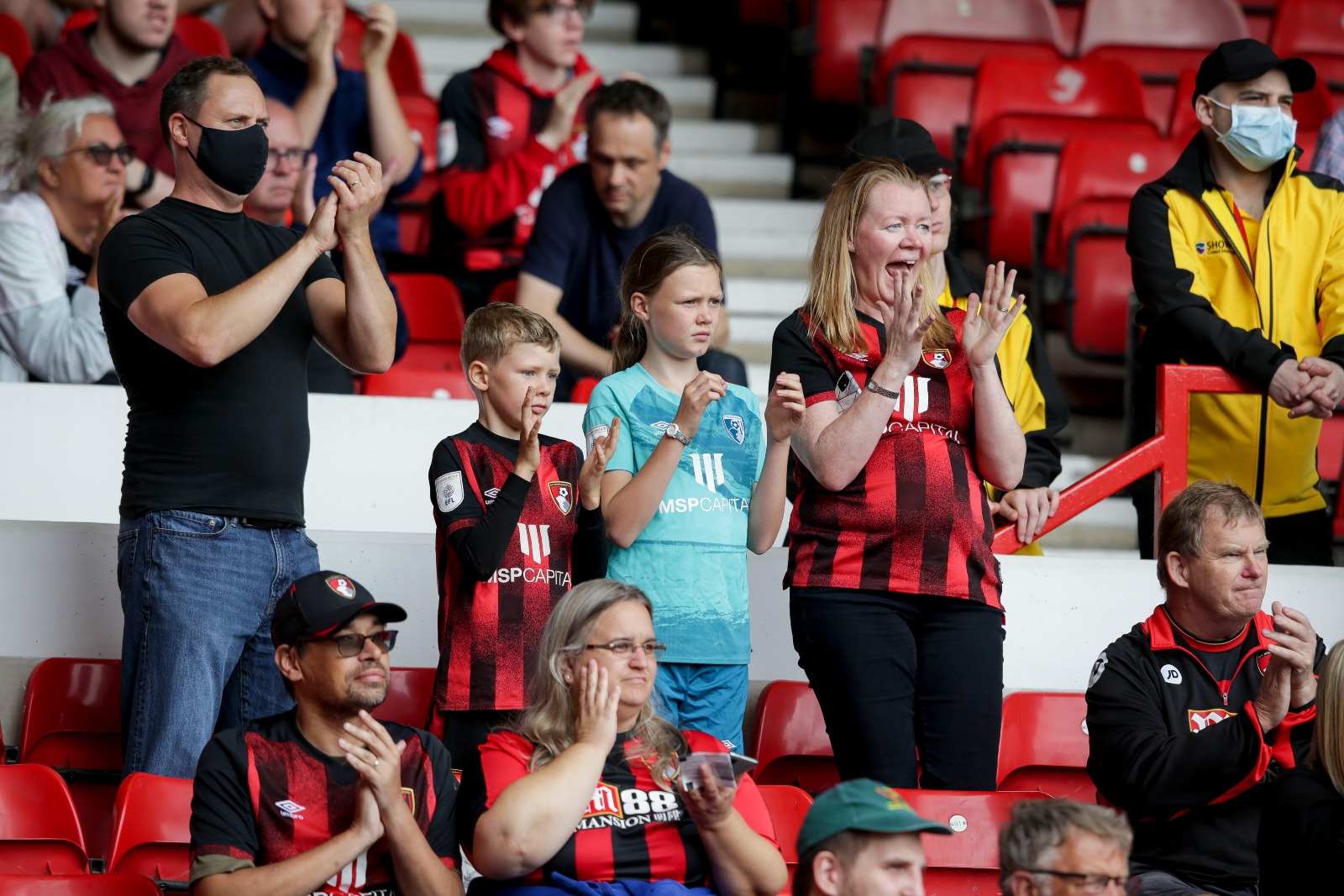 Counting down until kick-off ⏰#afcb 🍒 pic.twitter.com/NZTYRyYkyH 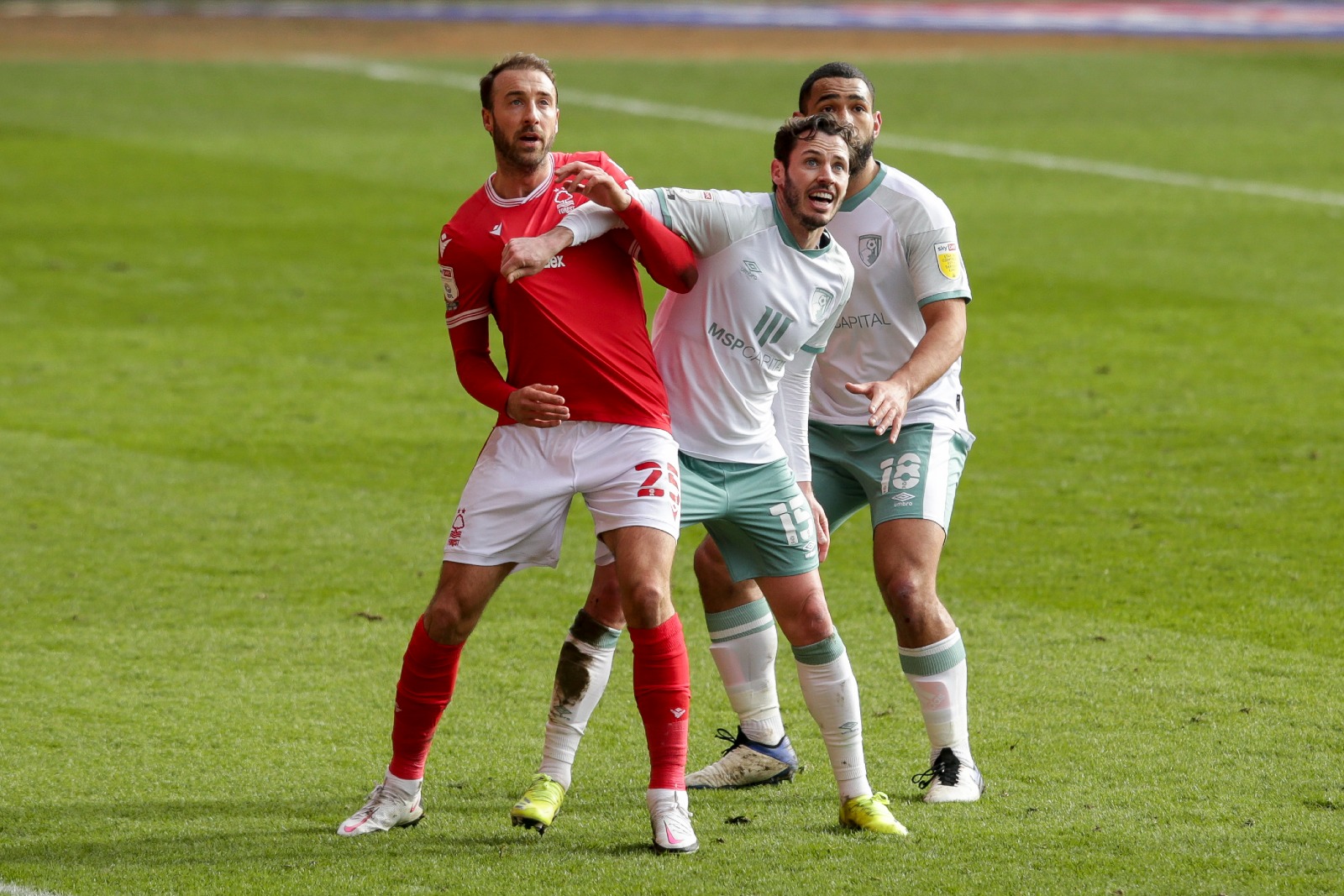 Our last trip to the City Ground was a goalless draw towards the backend of last season.

Both teams had good chances to win the game, with Junior Stanislas going close for the Cherries and Glenn Murray seeing a header cleared off the line.

In the reverse fixture at Vitality Stadium, Stanislas popped up with a double to give us a 2-0 win, the first goal coming after just three minutes! 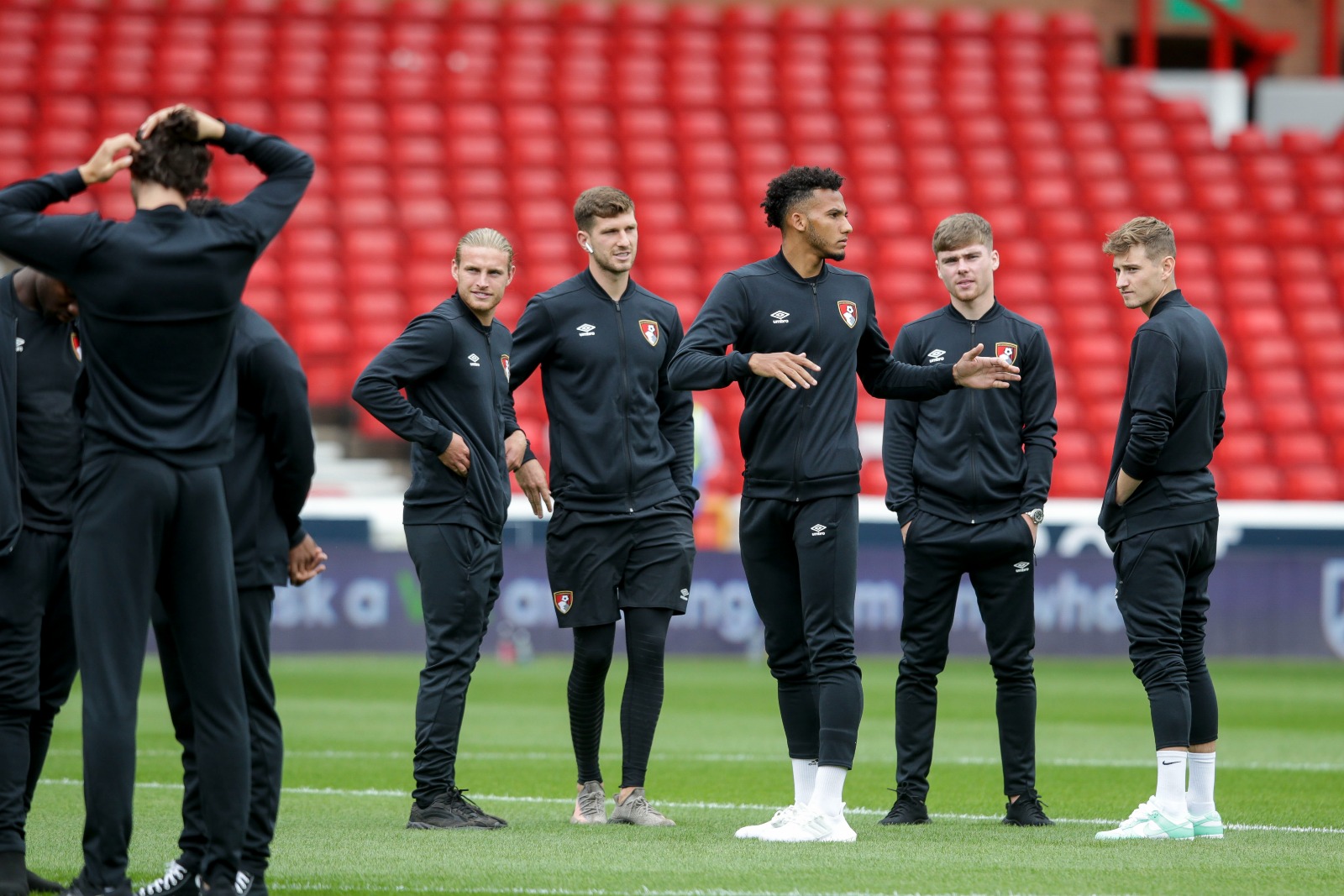 "We're feeling good. Everyone in the camp is excited about this game. It's a first away match of the season and of course our first one with away fans back in. That's an added bonus, so we can't wait.

"It's been such a long time since we had away fans. It will give us such a boost and hopefully it's set up for a really good game."

Starts for these three this afternoon! 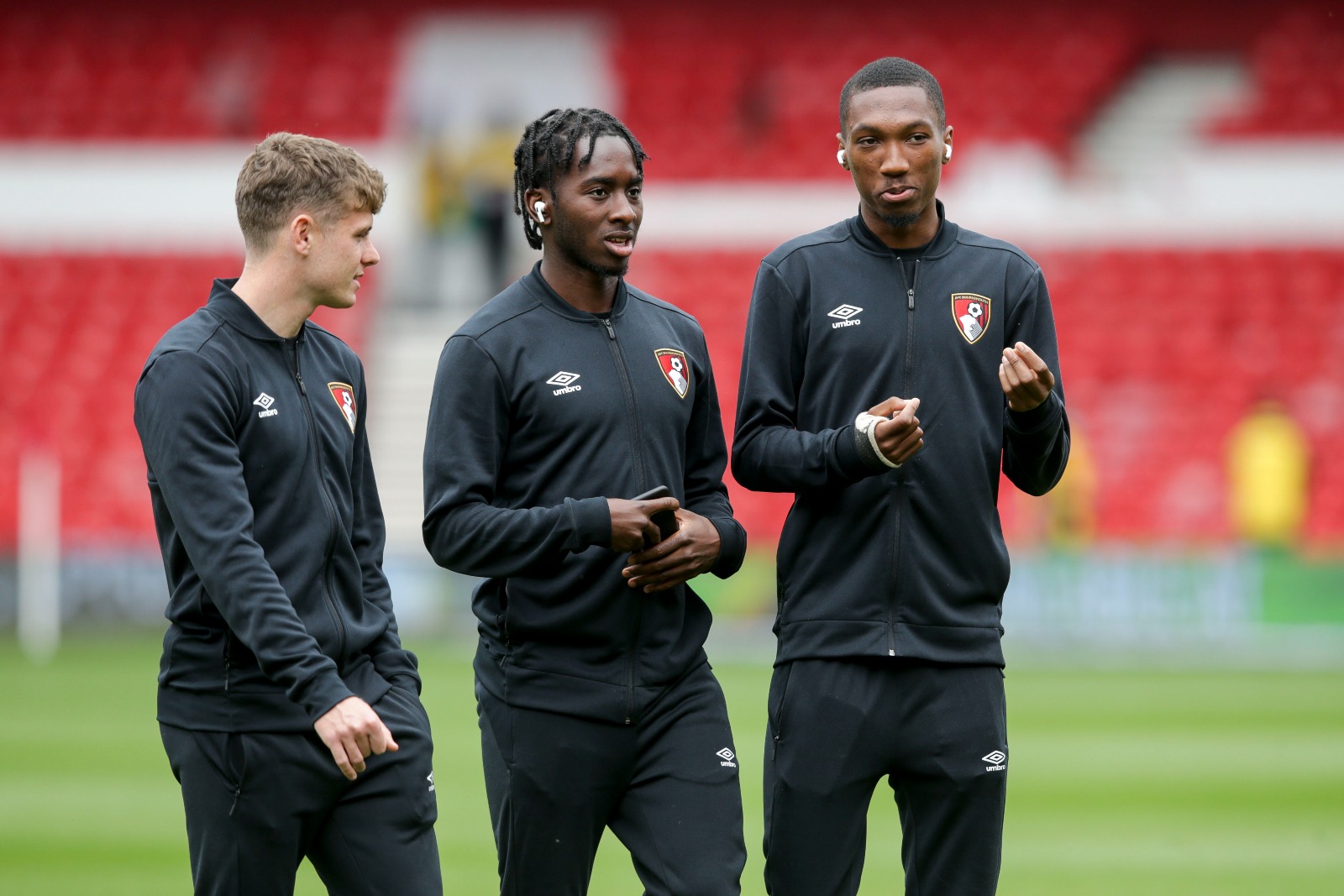 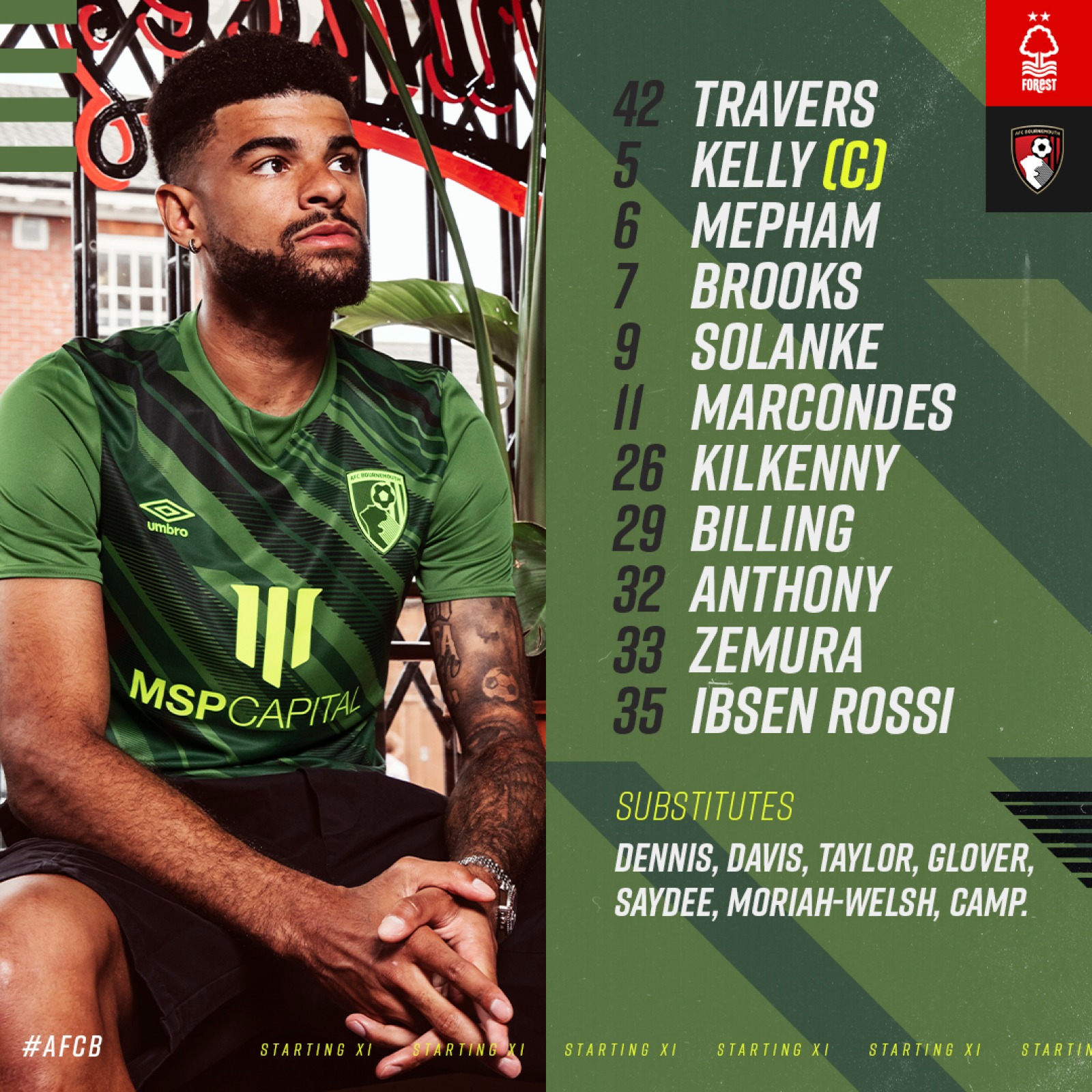 Scott Parker has made one change to the starting line up from last weekend's 2-2 draw with West Brom.

Zeno Ibsen Rossi comes in for his Championship debut, as Adam Smith misses out through illness.

Youngster Gavin Kilkenny, who was voted the MSP Capital Man of the Match against the Baggies, retains his place, while Jordan Zemura and Jaidon Anthony also both start after their assists eight days ago.

On the bench, it's a first appearance for summer signing Leif Davis, who has overcome a slight niggle.

Latest on the injury front... 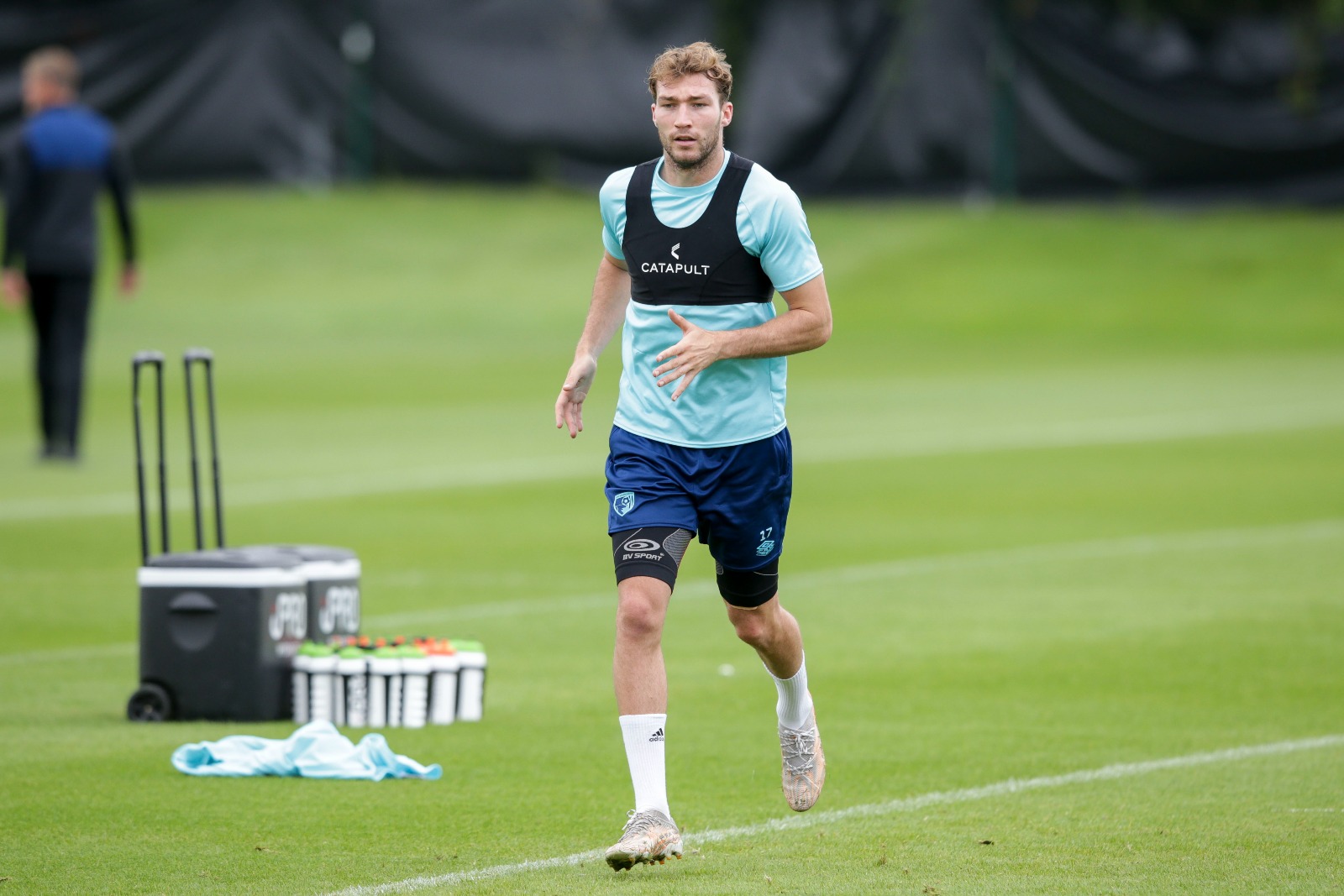 Scott Parker gave a rather large injury update yesterday, with a "late call" to be given on Jack Stacey. The boss went on to provide an update on the rest of the squad:

"With Steve Cook it's the same. He's back with the group, albeit he's modified in his training. He's still not available to play.

"With Junior Stanislas it was a pleasing result on his scan, it wasn't as bad as we first thought ad he's already on the grass running again. This weekend probably comes a little bit quick but I'd like to think the coming games next week will see Junior back in then.

"Leif Davis is training, again he's on his own modified schedule and is in the Danjuma category where he's not done a lot of work in pre-season so we'll need to judge where he is.

"Ben Pearson is back with the group as well, again he's not done a lot of work over the last couple of weeks so we'll have to judge that nearer the weekend with where we are with him."

The view from the boss... 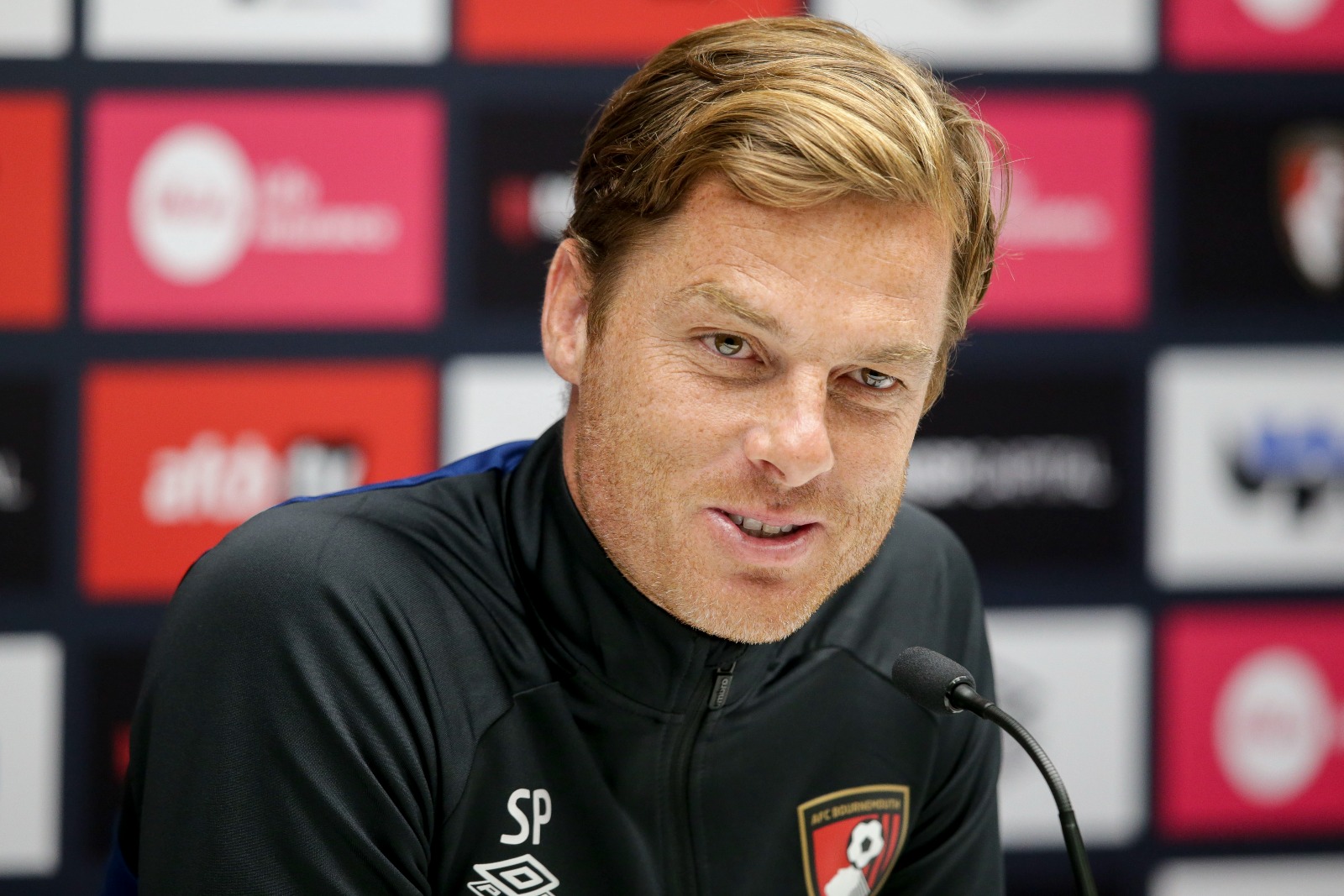 "It's a relentless league, it has lots of ups and downs and it's a bit of a rollercoaster but thats why everyone loves it!

"The most consistent teams, as logical as it sounds, are the most successful ones.

"You can see it in the first weekend of results and how mixed they are, consistency is a big factor of how this league is." 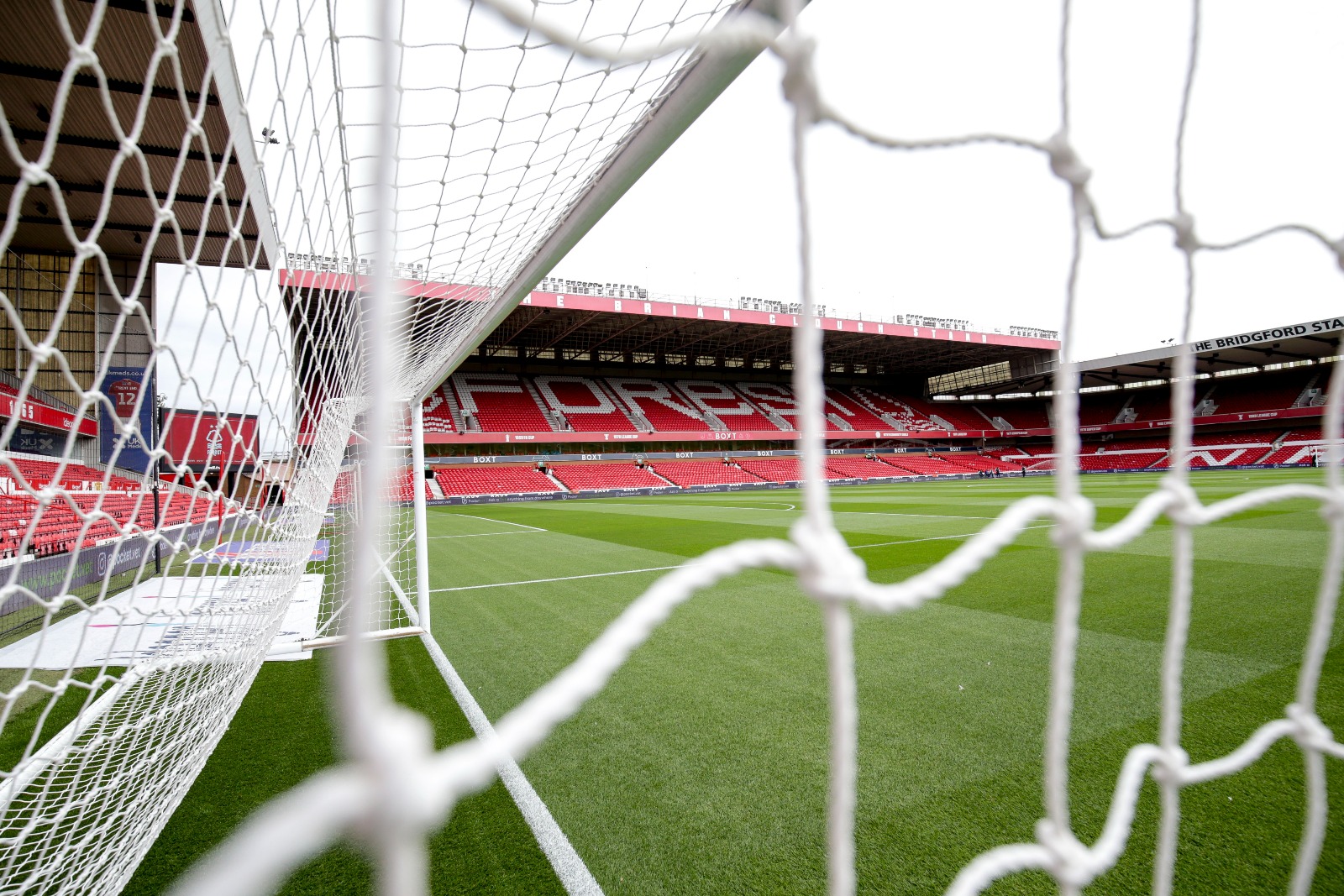 Hello and welcome to this afternoon's matchday blog, as we bring you live coverage of Nottingham Forest v AFC Bournemouth.

We'll have all the pre-match build up you need, as well as in-game updates to ensure that you don't miss a kick at the City Ground!

While streaming in the UK isn't available, you can still buy audio commentary on afcbTV for £2.50.

The calm before the storm! ⚡️

Who is on their way? #afcb 🍒 pic.twitter.com/hrDf0aywrz