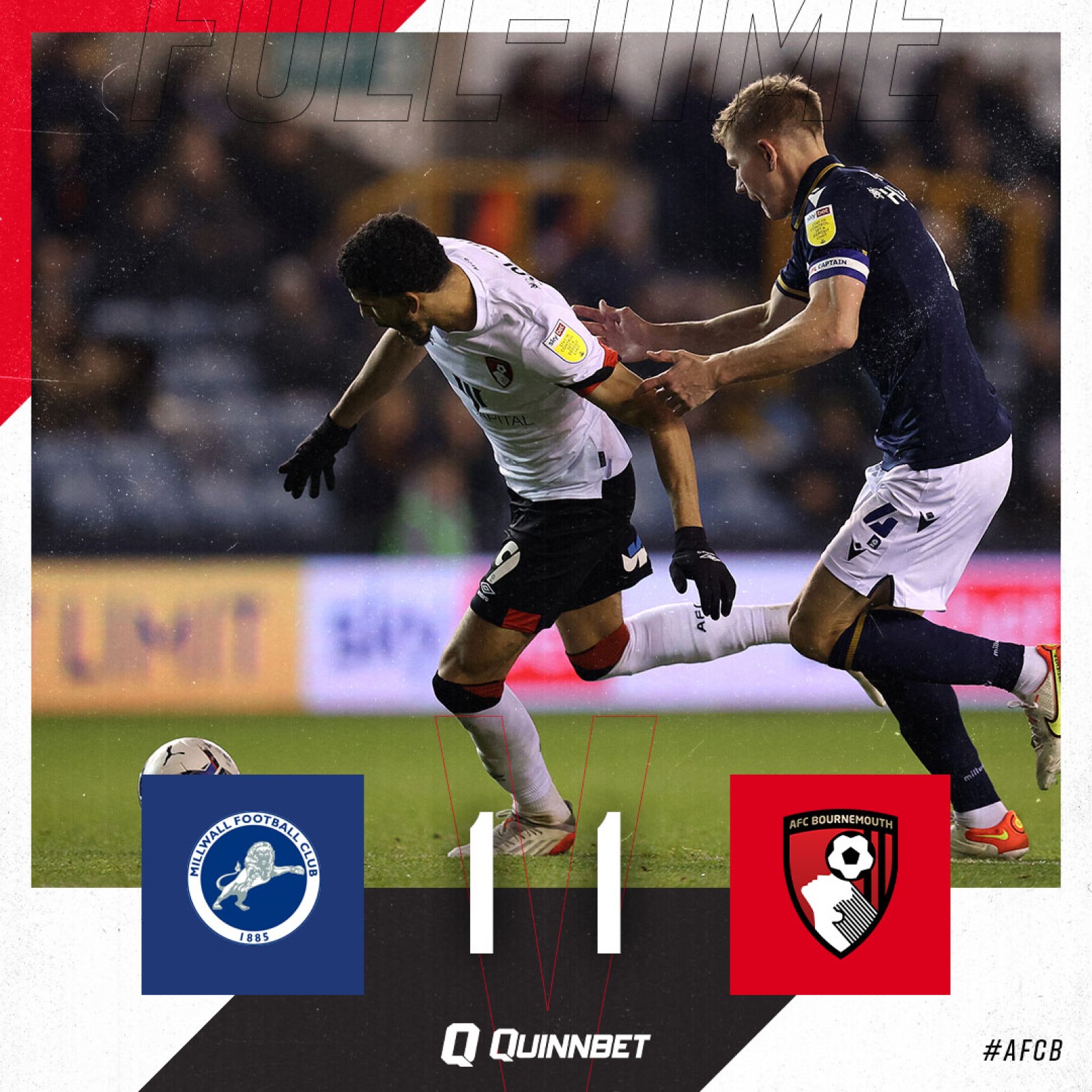 It's a draw at the New Den.

The Cherries had the lead through Dominic Solanke but Benik Afobe netted a deserved equaliser for Millwall.

A good point in the end.

The Millwall midfielder takes a shot from distance but it's well wide.

Final sub for the Cherries

A Mepham slip allows Afobe to drive forward, trying to pick out a man in the middle.

It bounces back to him and he picks out Wallace at the back post, who looks set for an easy finish.

The Millwall man brings down Marcondes, who had gone on a good run down the right touchline, and picks up a yellow card.

We've gone to a back five

Jefferson Lerma has dropped into centre-back to complete a back five.

Meanwhile, Anthony has drifted more centrally at points to allow Davis to take a higher position out wide,

The substitute leaves a dangling leg and trips a Millwall man, getting a yellow card in the process.

The free-kick comes to nothing. 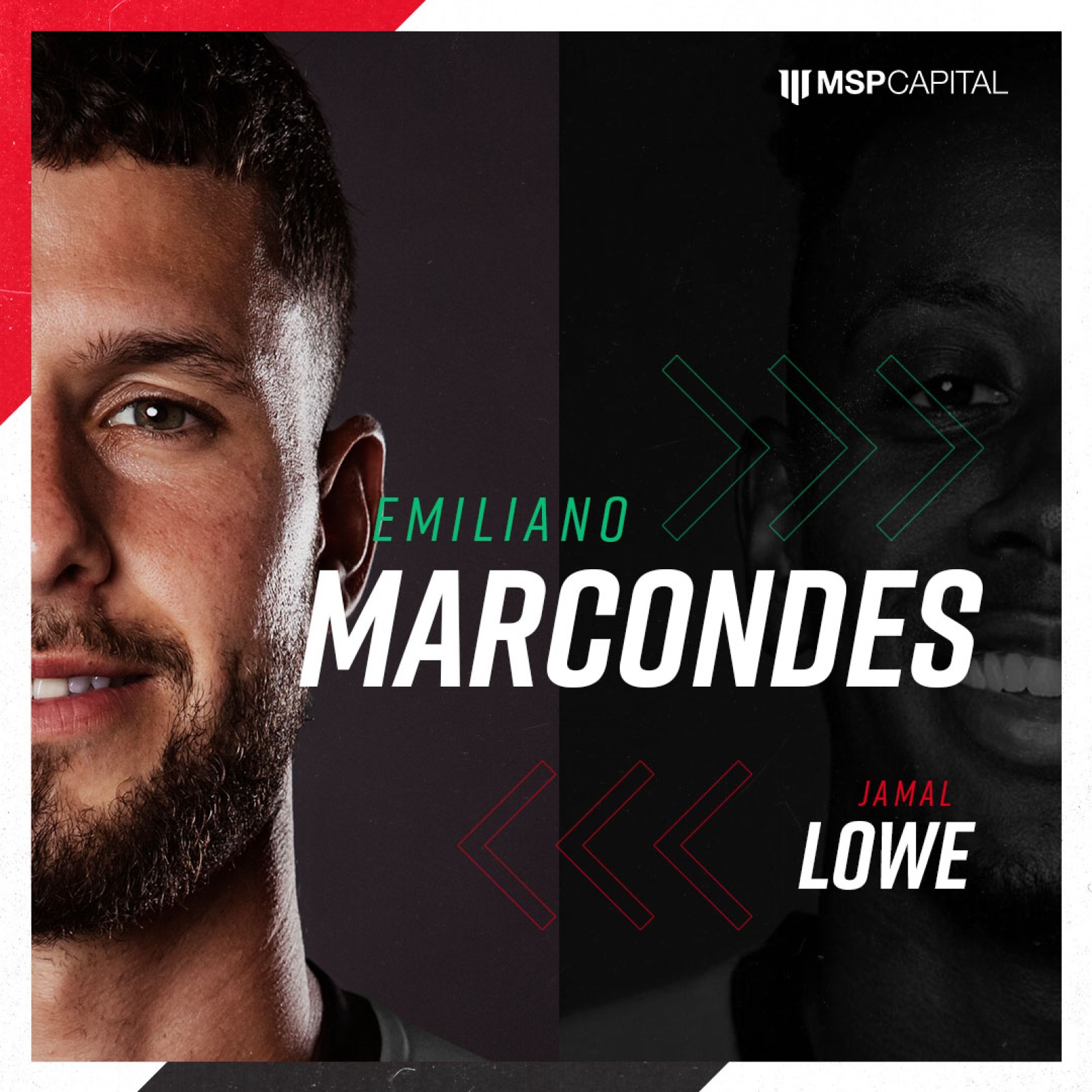 Billy Mitchell rides a couple of challenges down the left touchline, cutting inside and curling an effort towards the far corner.

It's not far over by the Millwall man.

Millwall win a free-kick outside the area as a high arm by Mepham is caught out.

Jed Wallace is over it but the cross is well defended.

The Cherries under pressure now

The crowd is massively behind Millwall now and they are putting a lot of pressure on the Cherries defence with every attack.

We need to see this period of pressure out if we can and then get our foot on it and try to dictate play as much as possible.

It came from a long ball over the top and the striker beat Cahill for pace.

Mason Bennett is replaced by Tom Bradshaw as Millwall continue to chase for an equaliser.

First change for the Cherries 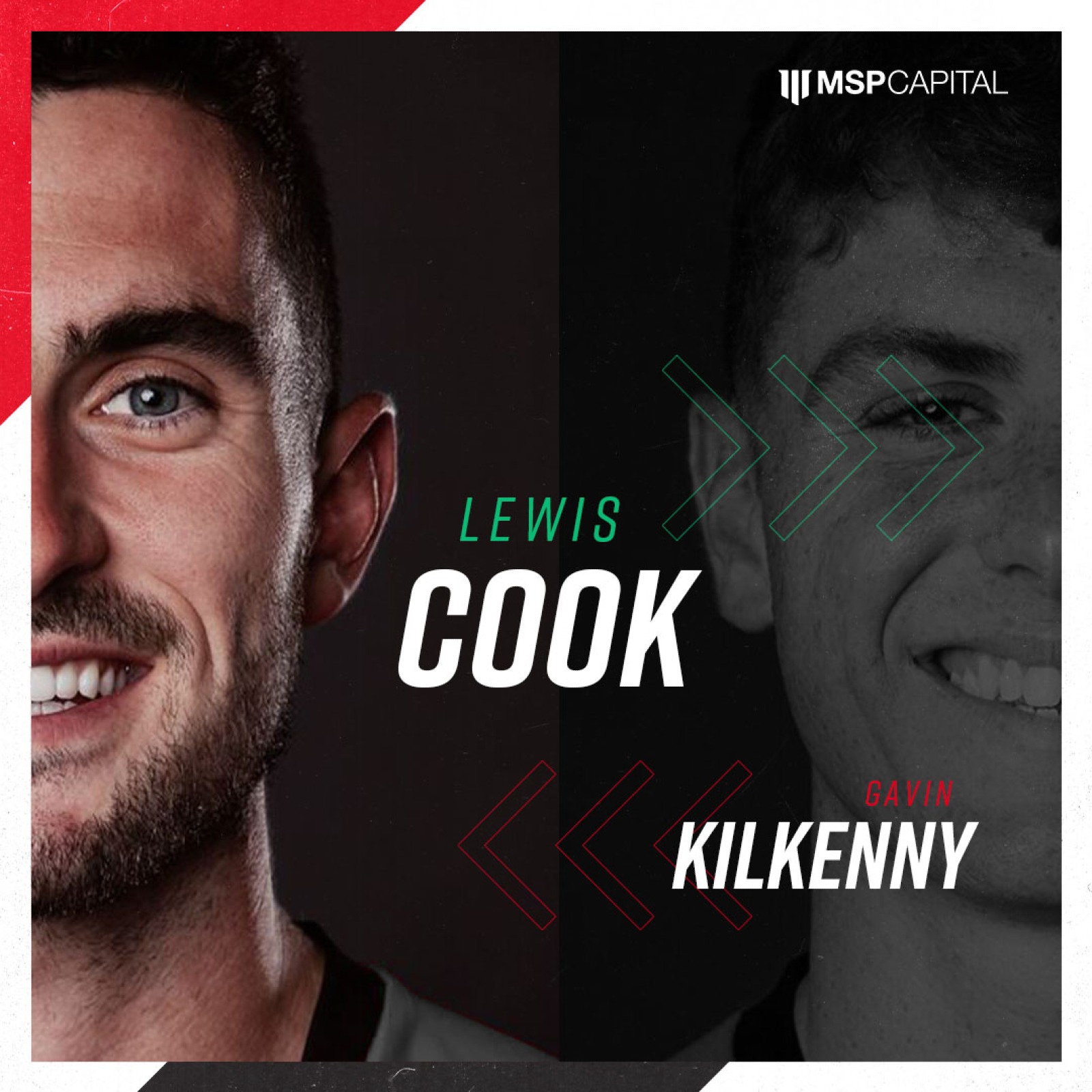 Gavin Kilkenny has been brilliant again but given he's on a yellow card, Parker has decided to make the change.

Corner comes to nothing

The Cherries were forced to defend the corner without Cahill but deal with it brilliantly, winning the near post header.

Cahill is now back on as the Cherries find themselves under a period of pressure.

Gary Cahill, that is tremendous!

A long ball evades Mepham and Afobe looks to be in clean through.

However, Cahill races back and makes an unbelievable block to stop the goal-bound effort.

He's picked up an injury in the process and requires a few minutes of treatment before gingerly getting back to his feet. He looks okay to continue though.

Matt Wells has just signalled Solanke to drop into a deeper role when the Cherries have it in defence.

Mepham waits for him to fill the space before playing it to him, Solanke touching it to Kilkenny as the Cherries move it around.

Presumably they want Solanke to be more involved in the link-up play as the Cherries build attacks.

The Cherries have so much room to attack when we win the ball back, this time Christie drives at the defence and tries to guide his effort towards the far corner.

However, it doesn't arch wide enough and Bialkowski makes a comfortable save.

Christie and Solanke are having lots of joy though.

This second period has opened with a much higher intensity as Millwall search for an equaliser.

That does leave the opportunity for the Cherries to counter attack and they have a good chance after winning the ball back.

Christie receives it outside the box from Solanke and plays it back to the in-form forward, who has opened up space in the box.

He can't quite get it under control and his eventual shot, while struck well, is blocked.

At the other end, as Millwall counter, Davis needs a vital toe to stop a cross from reaching a Millwall man.

The Cherries kick us off in this second half. 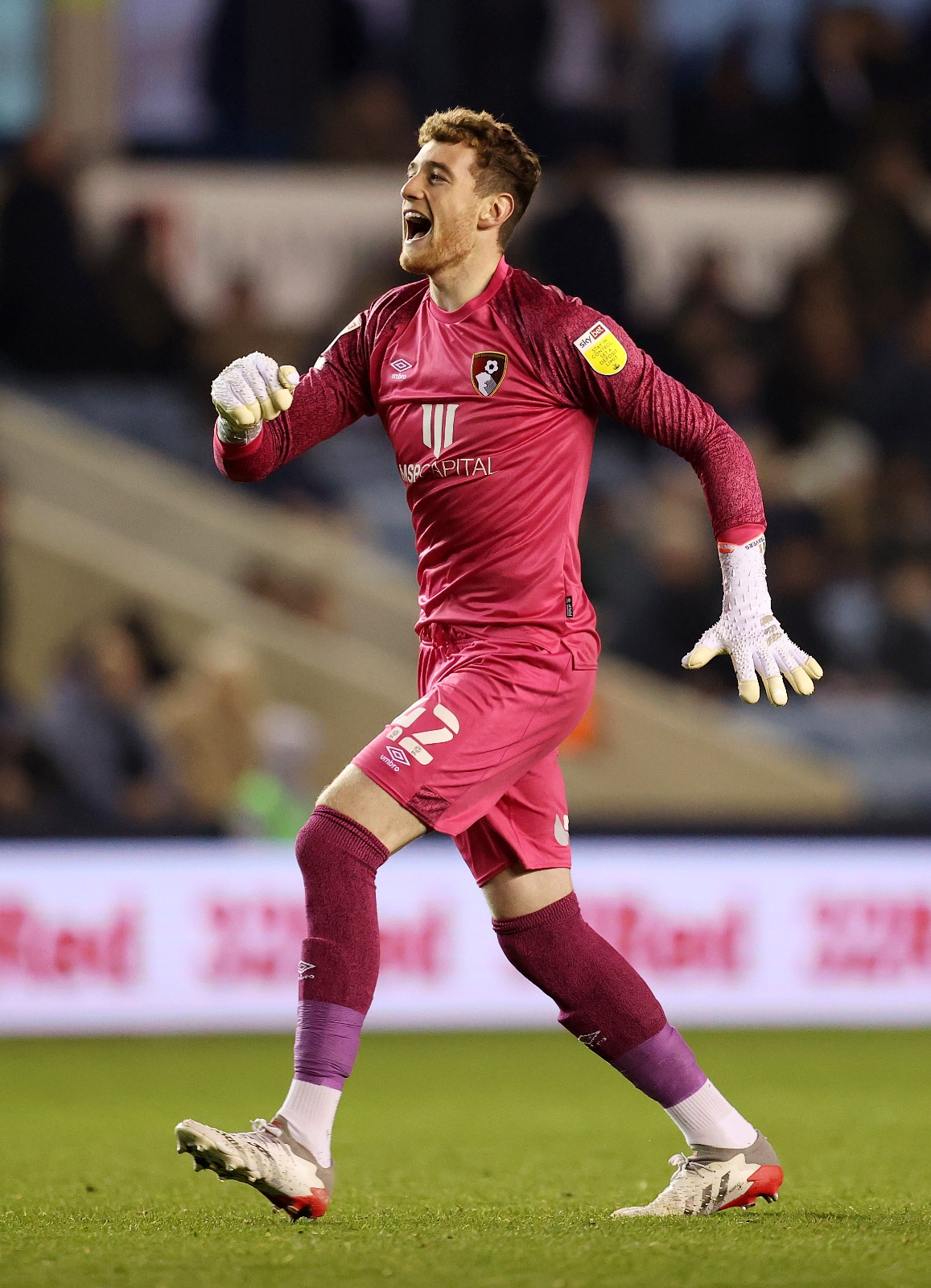 Mark Travers was buzzing to see Solanke net the opener!

That is that for the first half.

The Cherries grab the lead late on through Dominic Solanke.

It's really been a cagey first period and it was probably the Cherries' first clear cut chance that they scored from, but Parker will be a happy manager.

Anthony's corner is headed back into the box by Cahill, it lands at the feet of Lerma but he can't find a shooting opportunity.

Instead he shows real patience to find Stacey at the edge of the box and he clips it back into the middle.

Solanke is alive and at the second attempt fires into the roof of the net!

Kilkenny clips a stunning pass cross-field to Lowe, who brings it down and aims an effort at the far corner.

The shot is blocked and Christie flicks it over his head but just out of reach of Solanke.

The attacking midfielder makes a great touch in the middle of the park and sparks a dangerous counter attack.

He has men streaming forward on both sides but chooses to attack the box alone and is tackled.

Not much to report

There's nothing really to write about at the moment as both teams continue to probe.

Benik Afobe receives an ovation from the away fans

The former Cherries man gets an applause from the away end as he takes a moment to recognise them on a set-piece. 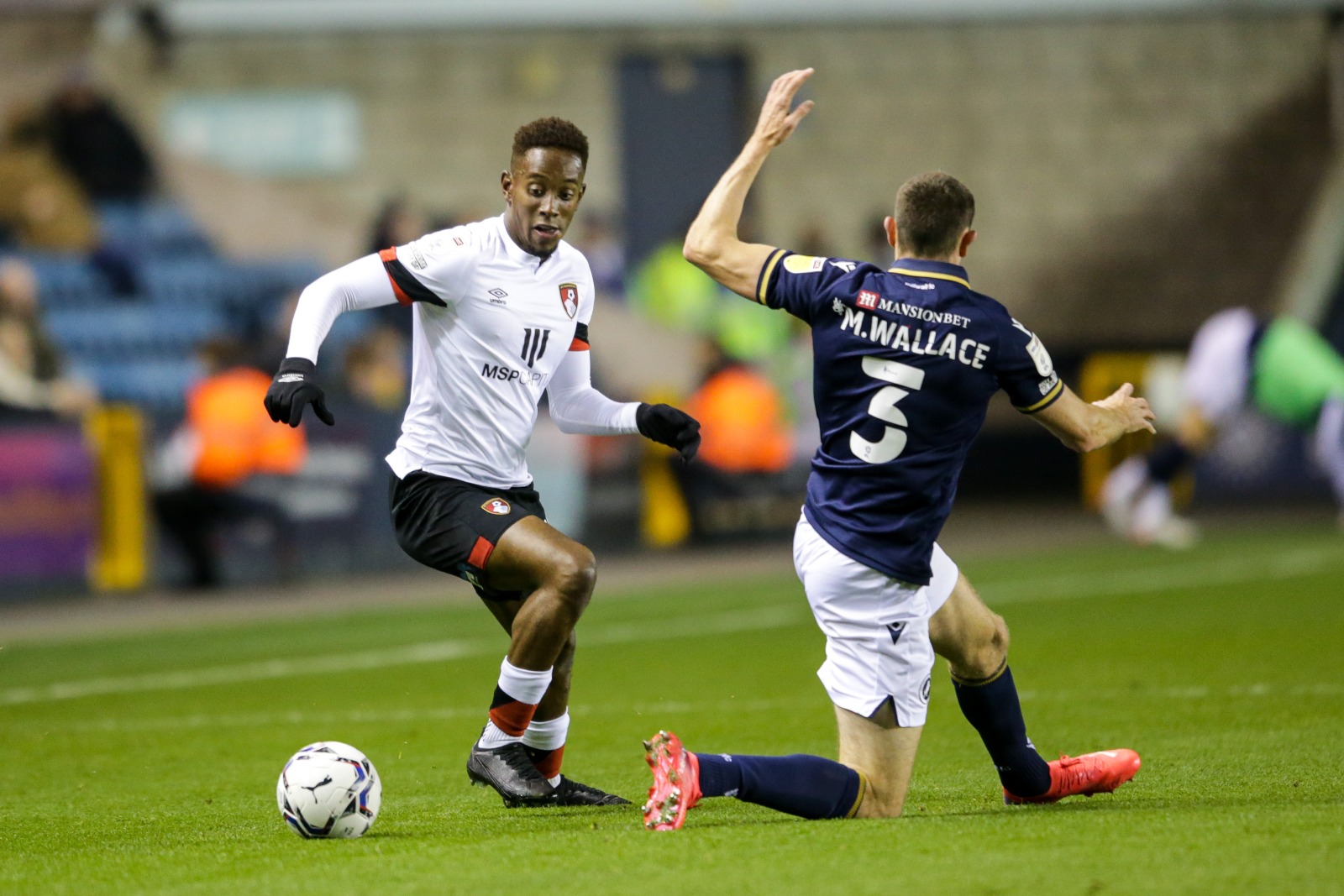 That was a good opportunity!

The winger is allowed to open his legs as the Cherries break and he drives into the area, allowing the run of Davis to open up a shooting opportunity.

His driven effort is blocked. The following corner is aimed the near post but the flick-on is blocked.

Kilkenny wins the loose ball, beating a Millwall man to it in the box, throwing himself out of the way of the follow through.

There's no claim for a penalty by the youngster, who immediately gets to his feet, but Millwall are indignant anyway and demand a second yellow card.

Rightly, no card is issued.

The Irishman fouls a Millwall player as they threaten a break and receives a yellow card.

Other than the Murray Wallace header early on, there have been no real chances of note.

It's all a bit cagey.

Nice build-up play as Solanke turns well in the middle, finding Lowe on the right.

He waits for the overlap by Stacey who has plenty of time to pick out a cross.

He aims for Solanke but Bialkowski makes a straight forward catch.

Both teams want it forward quickly

There's a slight battle of styles out there but they both share a common goal: get the ball forward quickly.

Meanwhile, the Cherries are a little bit more patient at times but with Christie and Solanke aiming to make runs beyond the back-line, we've tried a few quick balls forward too.

Christie can't get on the end of it

The Cherries have been excellent on the counter attack so far this season and showed their quality with a quick break started by Solanke.

He fed Christie who fired it into the feet of Lowe. Space opens up around Christie at the edge of the box and Lowe tries to play it into the Scot's feet, but puts it just behind him and he can't adapt and get it under control.

The first chance of the game falls to Millwall's Murray Wallace.

He rises highest from a corner but his header lands on the roof of the net.

Millwall have looked dangerous in the opening 10 minutes.

As has become standard, the Cherries faithful sing the name of David Brooks as he continues his treatment for Hodgkin Lymphoma.

As that chant rings out, Mepham is forced to make a good interception to prevent Afobe getting on the end of a dangerous ball forward.

The same man almost gets on the end of another good ball but this time Cahill makes the intervention.

Lowe gets beyond the Millwall defence

The Cherries get forward for the first time as Lowe makes an excellent run beyond Murray Wallace and receives the ball.

He looks into the middle and can see Solanke trying to make a darting run across the near post but checks back, and is shepherded away.

The ball is eventually worked to Lerma to cross in but it is overhit and causes no problems.

The Cherries have lined up with a more defensive midfield three, Lerma sitting alongside Kilkenny in the holding role, rather than more advance alongside Christie.

You get the sense that Christie will roam into different pockets in the more advanced role.

Millwall almost get their fans off their seats in the first couple of minutes as the ball reaches Malone in a good crossing position but his delivery is beyond any players in blue.

Millwall get this fixture started.

The Cherries, in their white away kit, have a packed away end behind them in the first half and quickly win a throw on the right touchline.

Gary Cahill leads the Cherries out here at the Den!

The away end is filling up as we get closer and closer to kick-off. 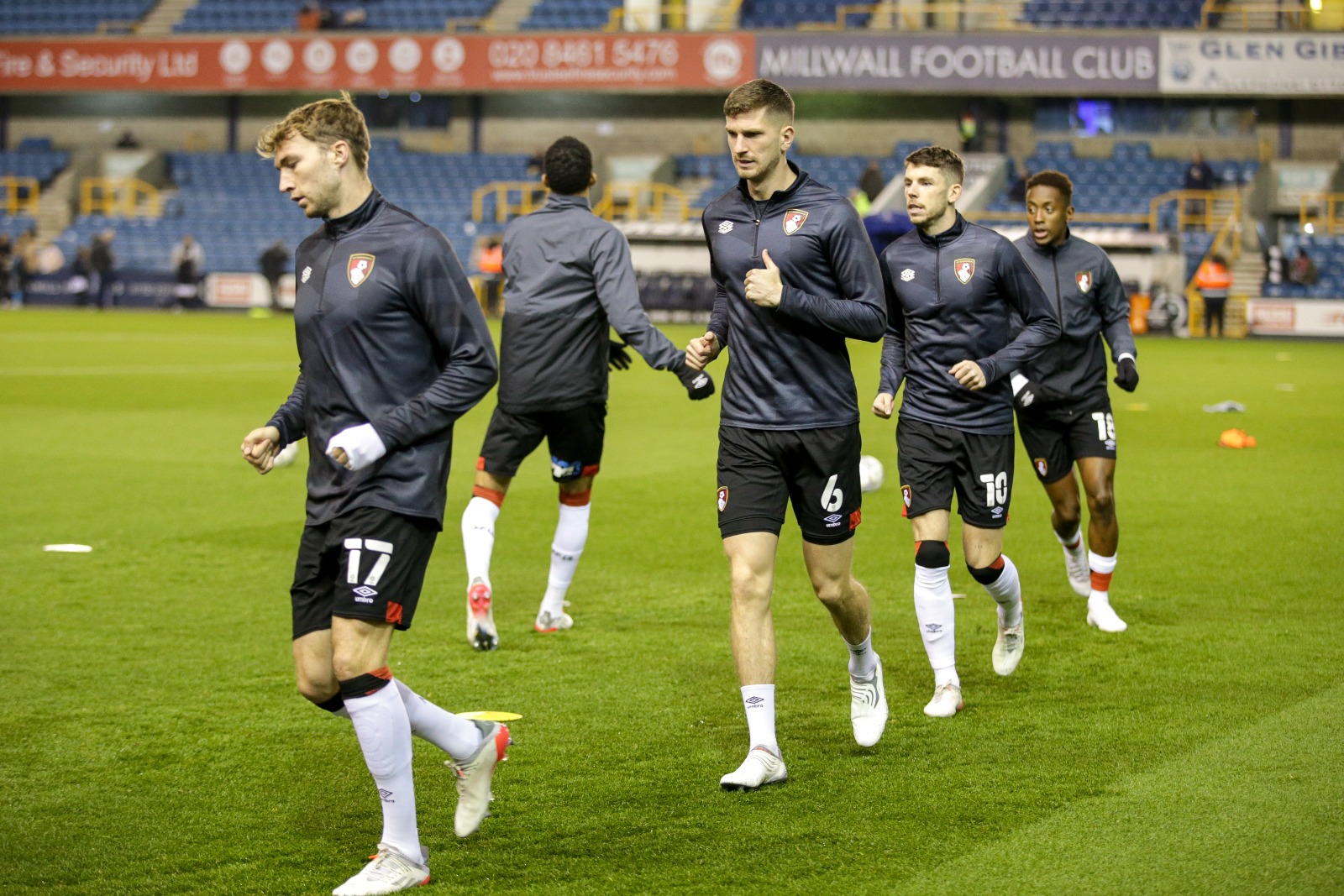 The players checking out the pitch

Good to see you, lads 👋 pic.twitter.com/fuyikqXahw 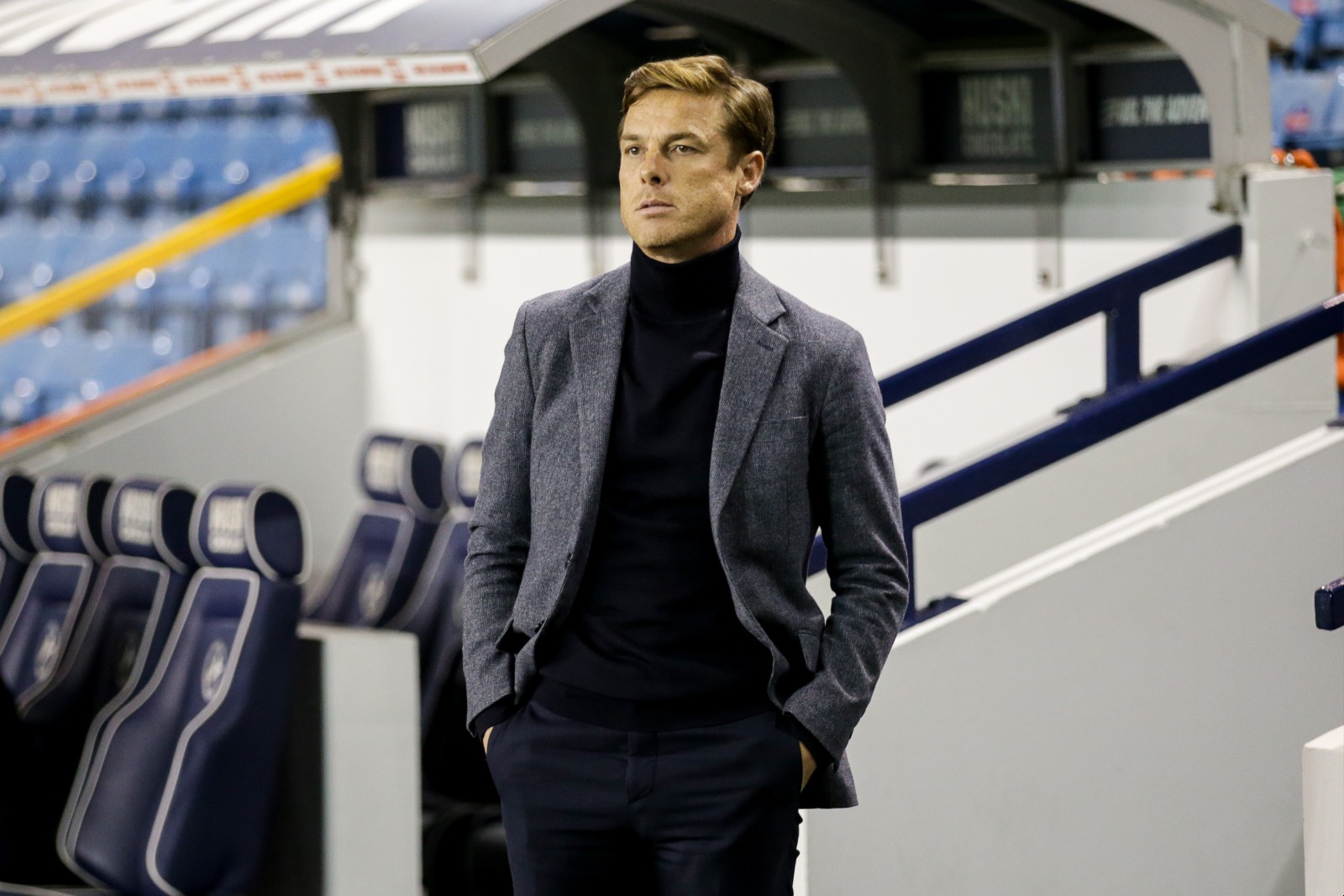 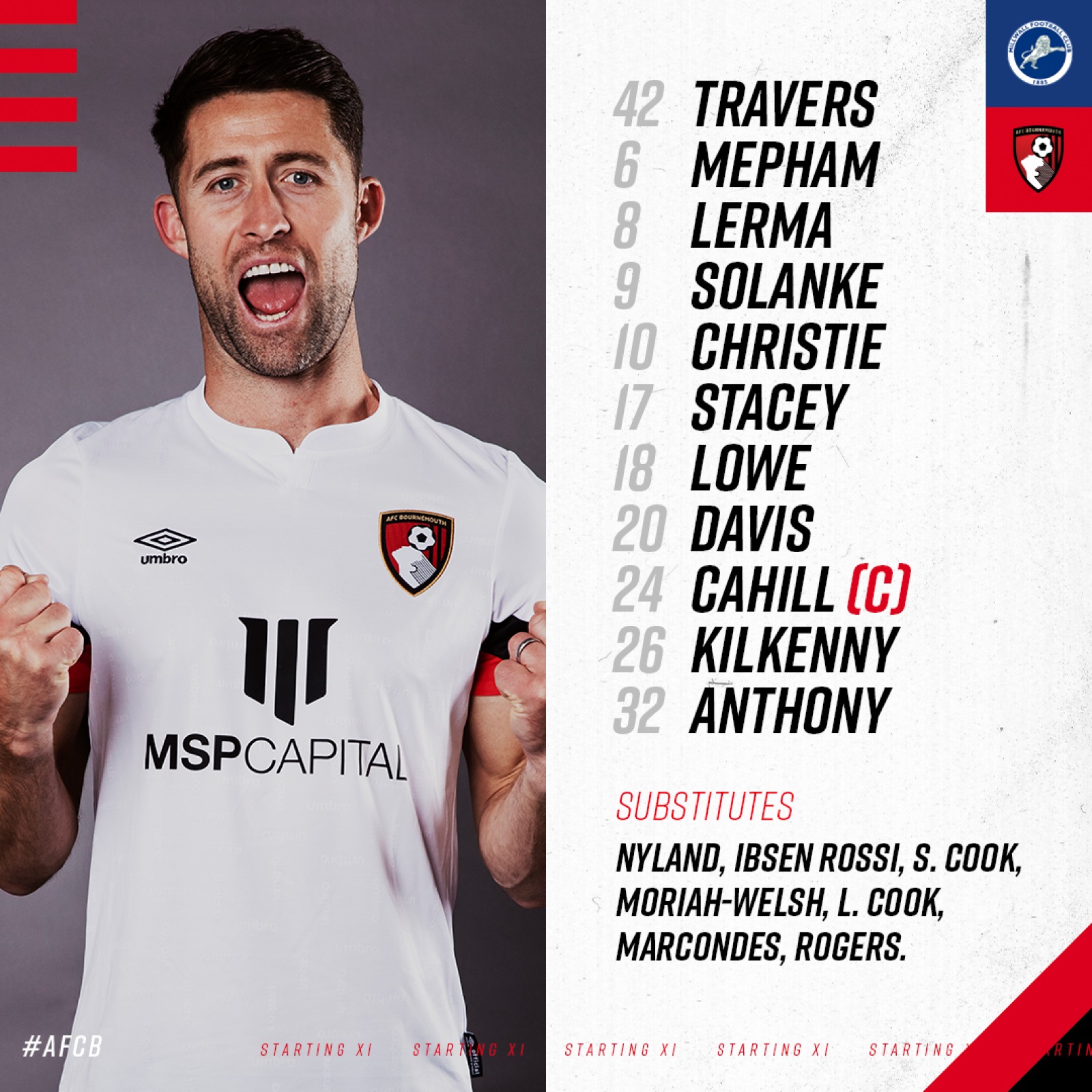 Scott Parker confirms two changes as Gavin Kilkenny and Jamal Lowe come into the team for Lewis Cook and the suspended Philip Billing. 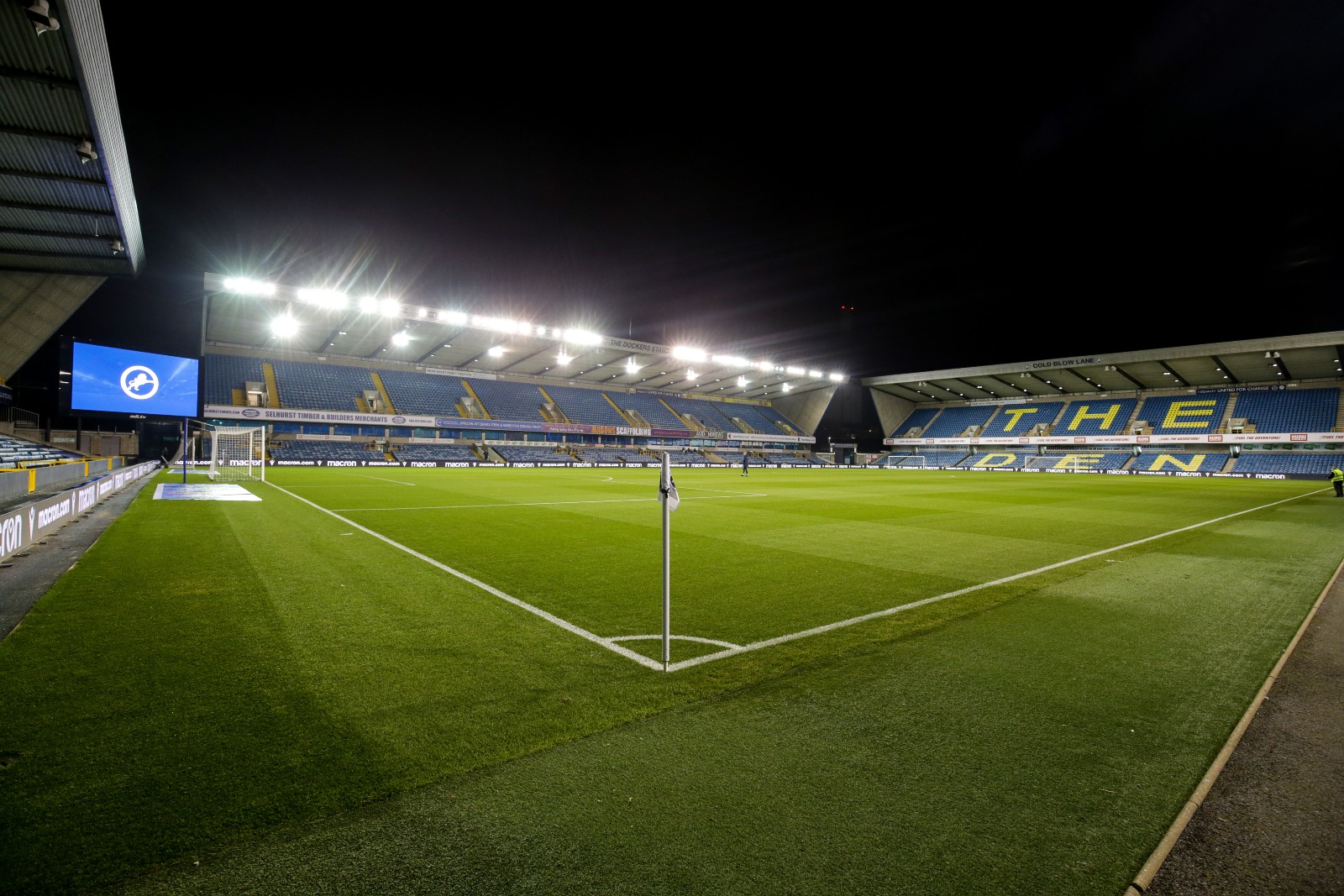 Thank you for joining us this evening for the Cherries' Sky Bet Championship clash with Millwall.

Scott Parker's side will be looking for a response to our first away defeat of the season on Sunday, Derby County taking the points on that occasion.

How will the Cherries react? We'll find out shortly with full updates from the Den on this blog.