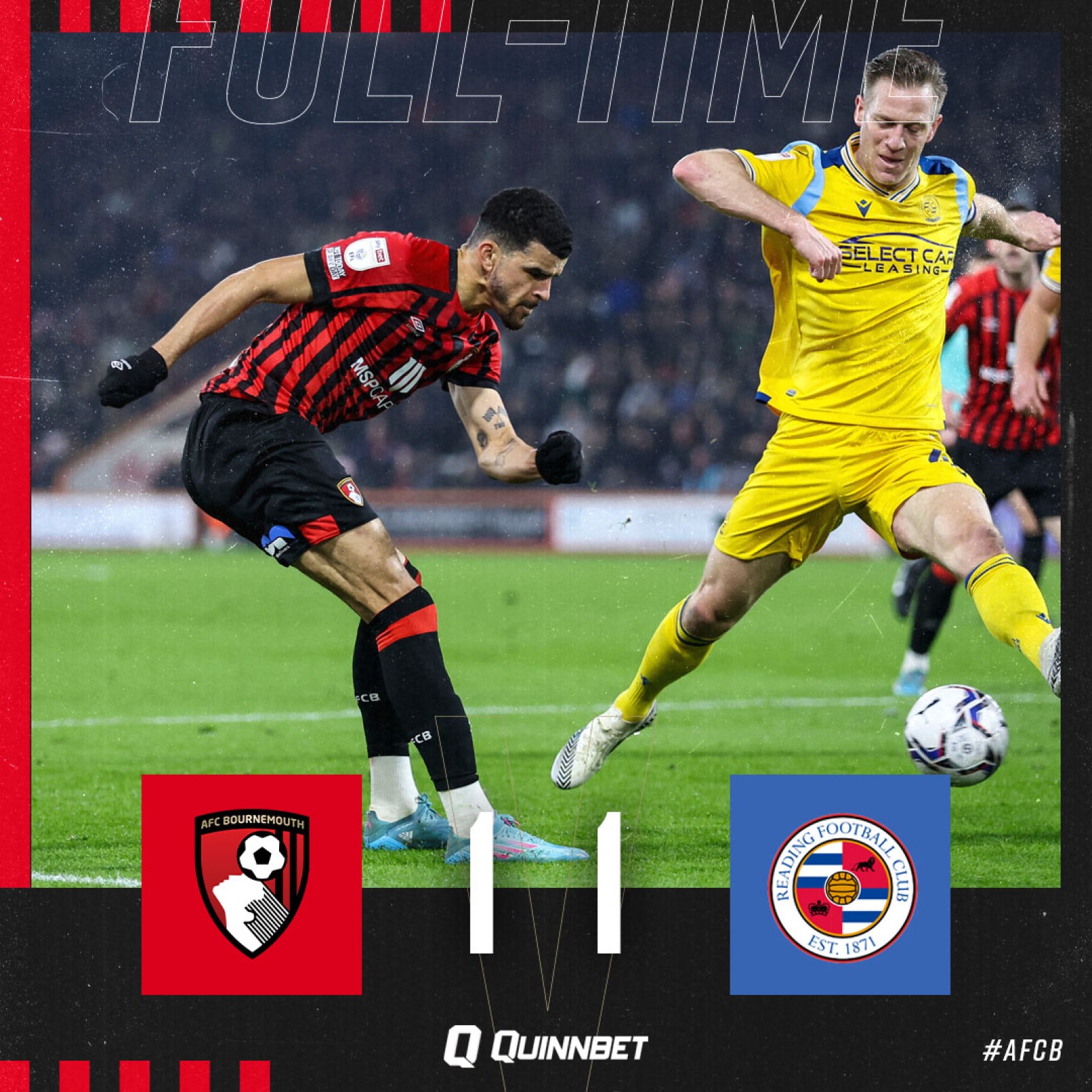 The Cherries are held to a draw at Vitality Stadium.

The Colombian receives a yellow for a late challenge.

The Cherries win a corner as Zemura picks up the ball at the edge of the box and shoots, taking a deflection to send it wide.

From the resulting corner, Lerma heads straight at Nyland. 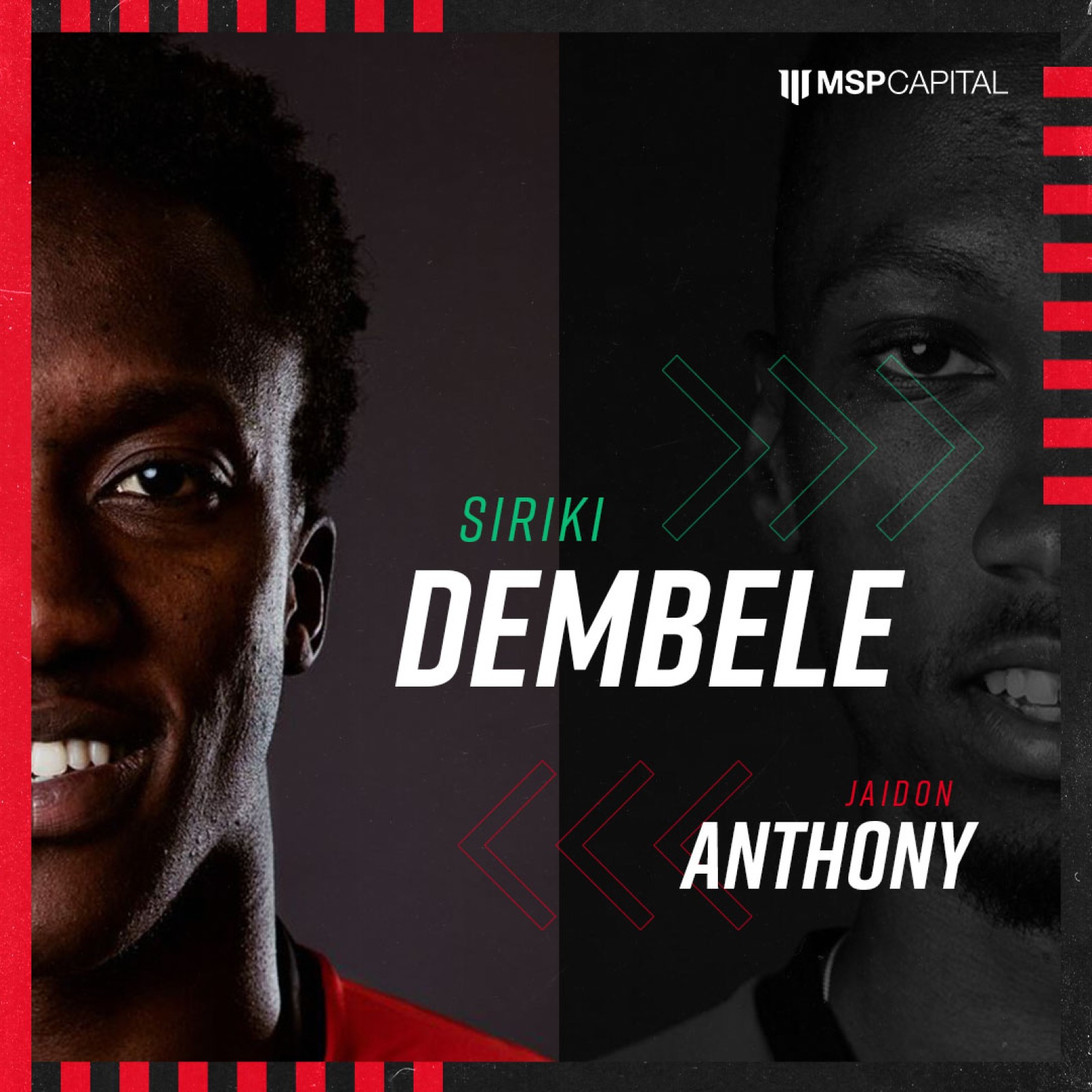 How will the Cherries respond to that equaliser?

The first action is to throw Siriki Dembele on.

It's a superb strike from Tom Ince and Reading have an equaliser.

A corner isn't cleared properly and Ince leathers a strike from the edge of the box into the top corner.

Better from the Cherries!

The Cherries have put together a nice move there as we search for a second goal.

The ball works across the pitch and Anthony finds Christie on the overlap.

He can't get a shot off and his cross is deflected behind.

Lowe and Solanke have also had a few decent runs, which don't lead to anything, but pump up the crowd here. 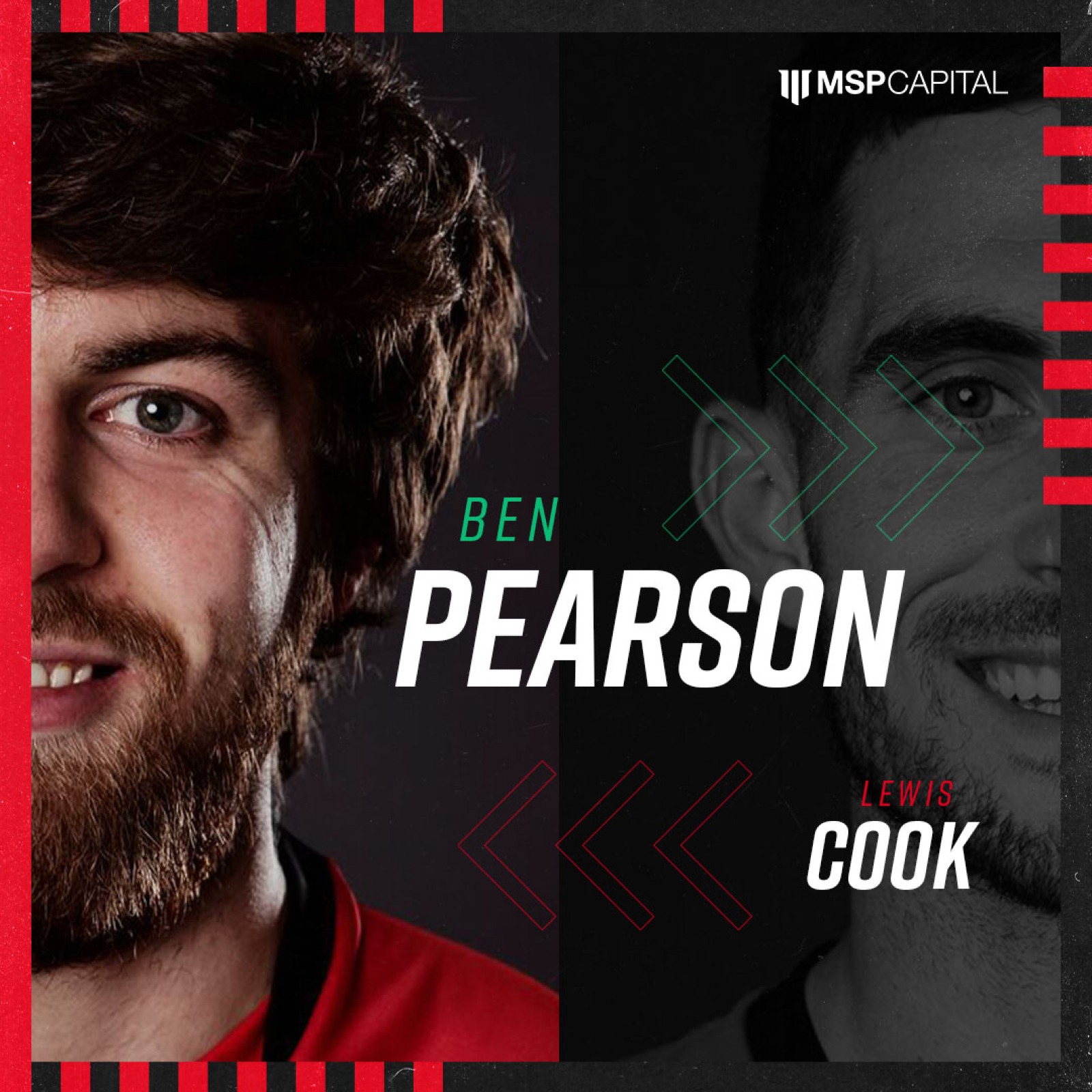 Lucas Joao is removed and Yakou Meite comes on.

The Cherries win a series of corners

Good play by the Cherries wins a corner on the right.

Christie's delivery is deep and a Reading man gets there but can only touch it behind.

From the follow-up corner, Anthony's delivery is too deep and Christie can't keep it alive.

The state of play

This is an interesting stage of the game.

Reading have looked increasingly dangerous in the second half and the Cherries have looked to slow down their momentum.

When we get the ball, it's been more about keeping it and trying to manage the game.

However, we've not created much in this second half yet and the 1-0 scoreline is looking very narrow.

Reading are having a decent period of pressure and win a free-kick on the right.

The defensive header is only as far as Drinkwater but he lashes his volley high and wide.

Ince sends in a inch-perfect cross that looks set to be finished off by Joao in the middle but Phillips adjusts his body excellently to get there first and touch it behind.

The Cherries clear the resulting corner.

The Cherries have a half chance as Christie's deep corner finds Anthony at the back post.

It's just behind the youngster so he can't get any real purchase on his header and it goes wide.

As expected, looks like Lowe has lined up on the right flank following his introduction.

As a result, Christie has moved into a central role. He's been superb today and hopefully the ability to roam a bit provides threat all over the pitch.

Reading get this second half underway.

He feeds the ball to Christie, who has raced beyond the defence, and the Scot fires a first time effort at goal.

Change at the break 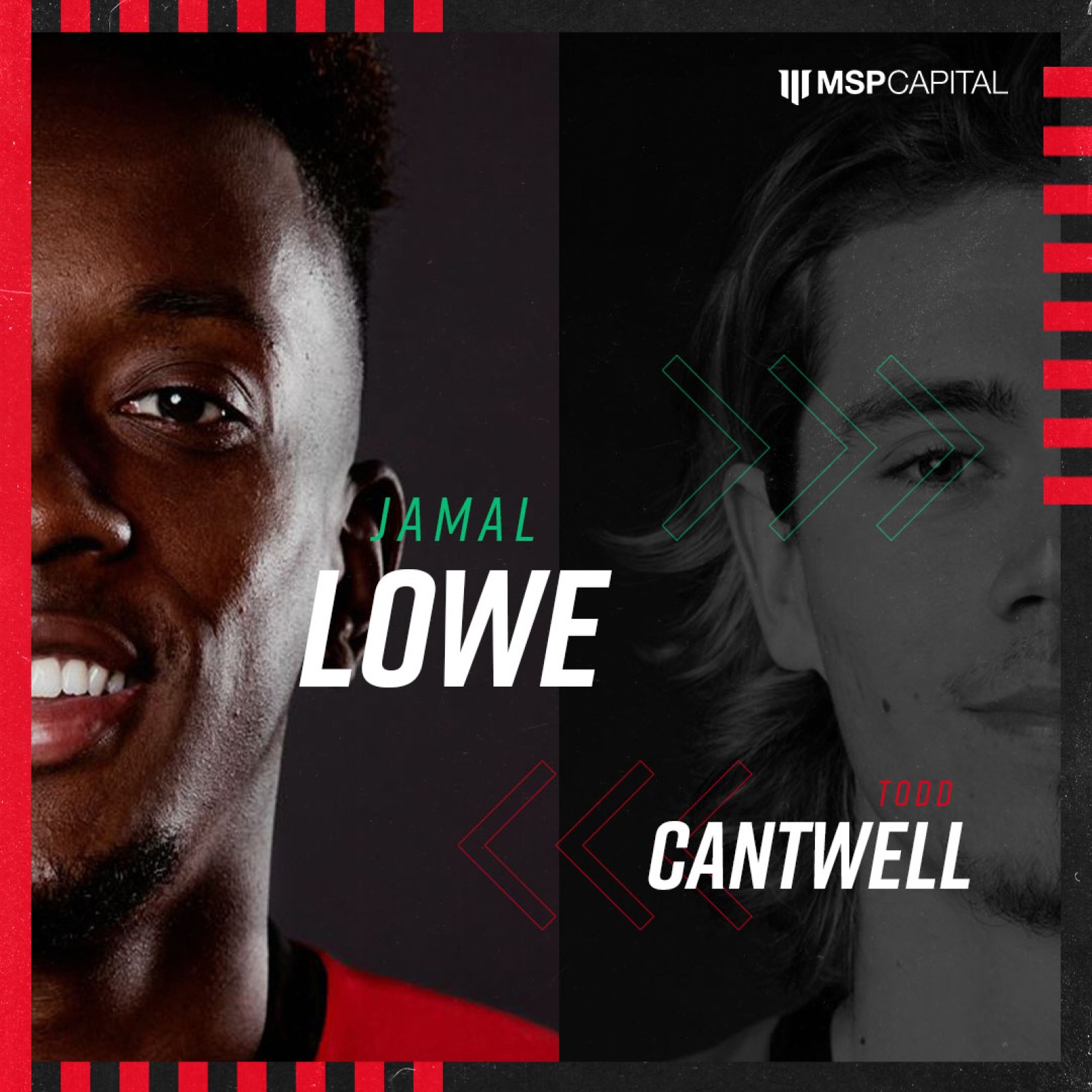 The Cherries have made one substitution during the half-time break.

A big second half 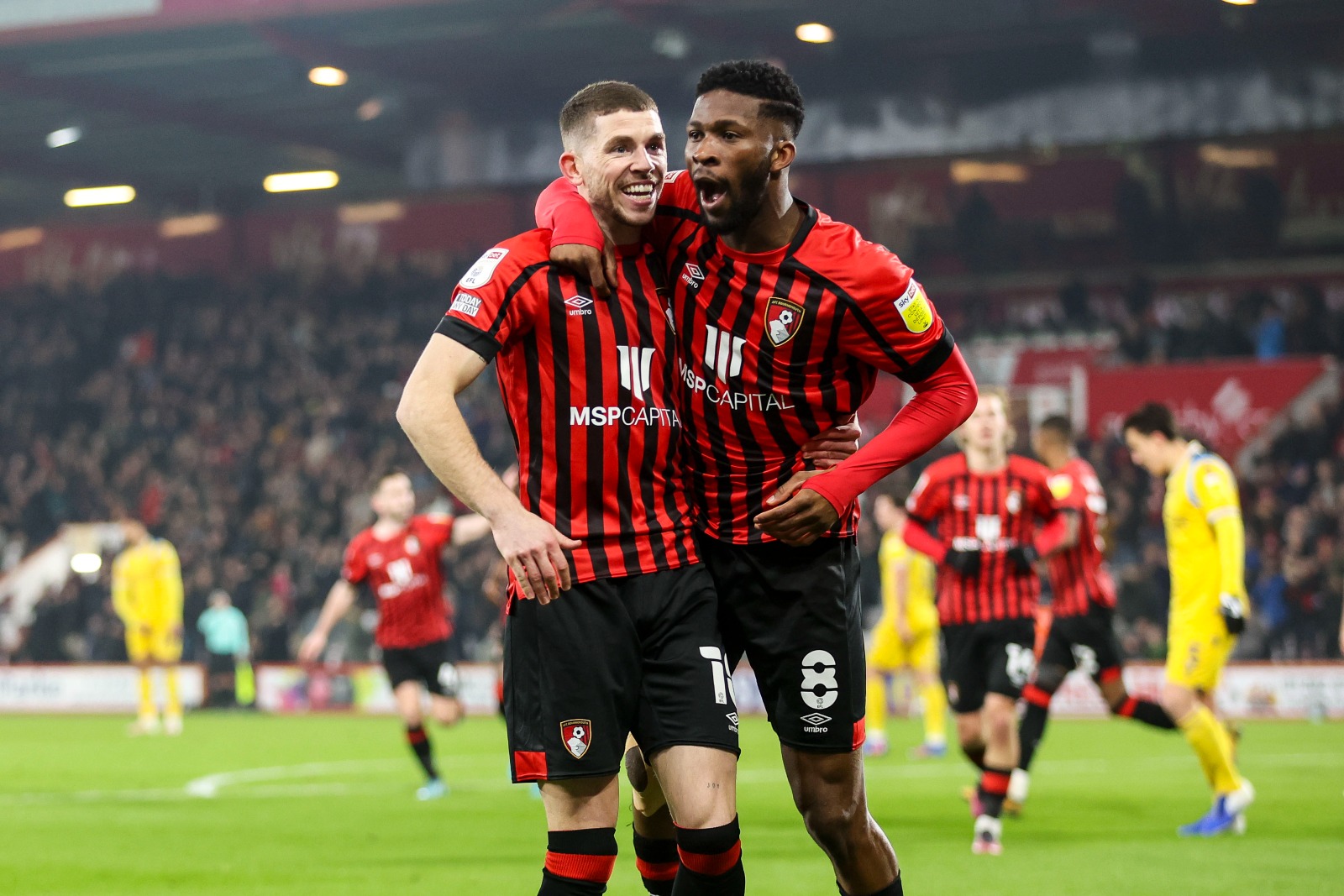 At times the Cherries have been superb today. The interplay has been impressive, especially in the move that created Solanke's opener.

The game calmed down for the final 15 minutes or so and it'll be interesting to see how each team adjusts for the second period.

The game can still go either way and the Cherries will want to get a second goal as quickly as possible. 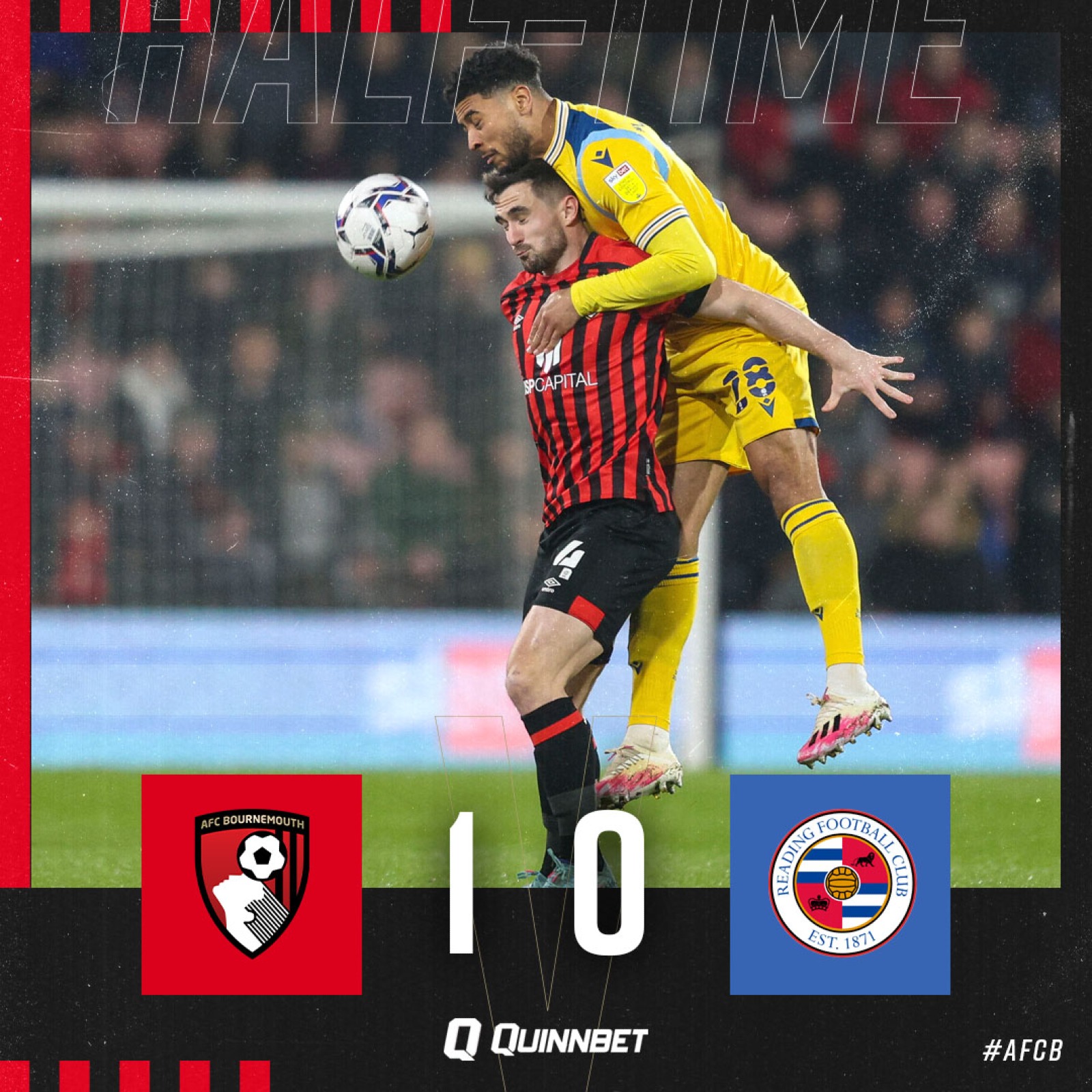 The Cherries have the lead at the break thanks to Solanke's well-worked strike.

One minute added on

A slight adjustment to the shape

The Cherries have changed their shape ever so slightly, presumably to react to certain periods of possession that Reading have had.

Lerma has dropped a bit deeper alongside Cook in the middle, with Cantwell the advanced option.

Chances have become a bit of a premium in the last 15 minutes or so.

The game has had a bit of a lull in the last few minutes.

Both teams are quite happy knocking the ball around and each have a sustained period of possession.

Cantwell gives away a foul in the middle - he probably needs to be careful given he's already on a yellow.

Wells on the touchline 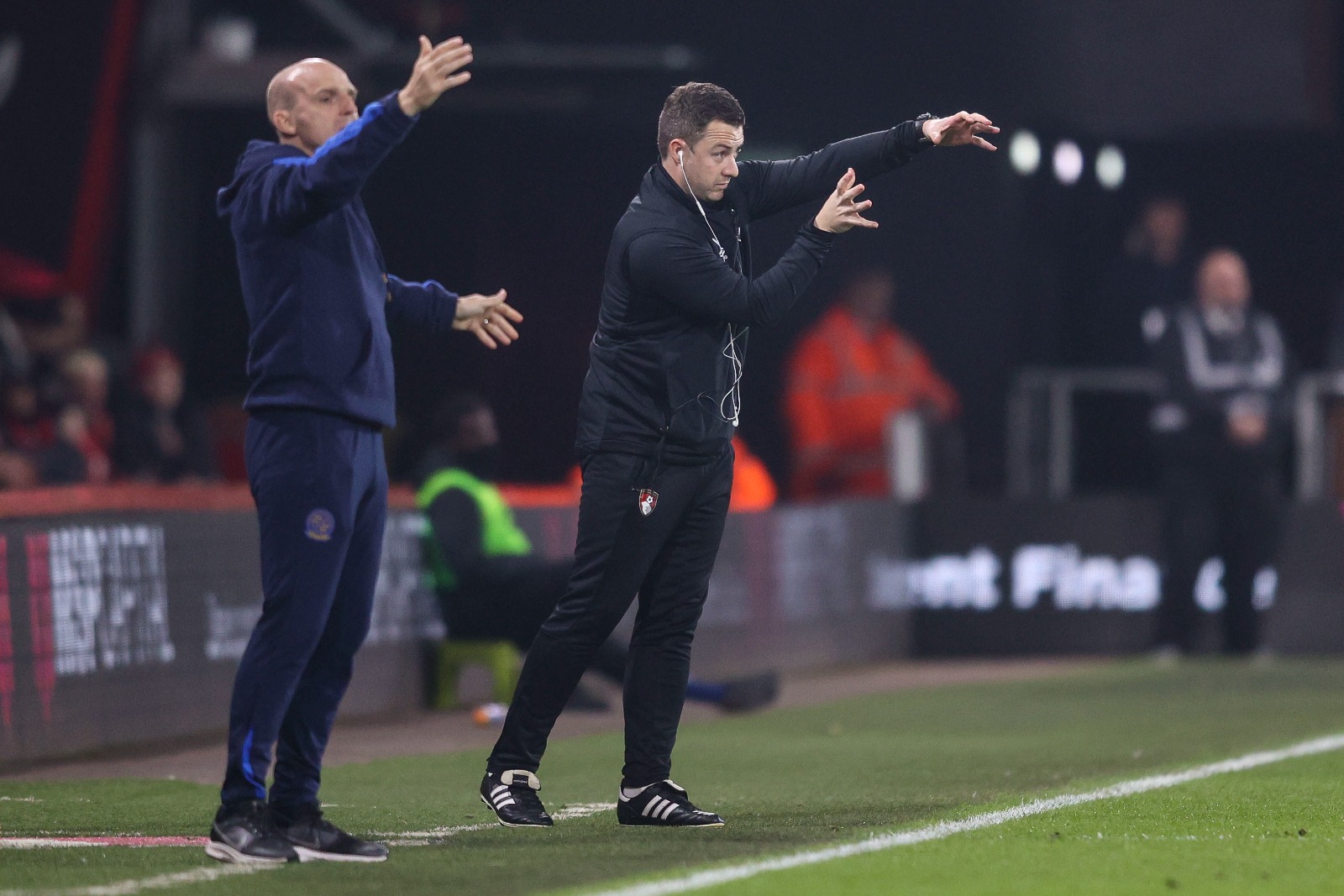 Matt Wells is the main man on the touchline this evening as Scott Parker serves his one-game suspension. He's in the stands alongside head analyst Jonathan Hill.

The Reading man receives a card for a late foul on Cook. Not dangerous but needless.

At the other end, Travers makes a good save.

Ince finds Yiadom on the overlap and he picks out Rinomhota at the edge of the box.

He hits it with his side-foot but Travers does well to get across to his left and push away.

Almost a second for the Cherries!

The build-up is excellent again, Solanke receives the ball in the middle and is forced out wide.

He gets space on the right and cuts the ball back into the middle, finding Cantwell.

He touches it to Christie who fires towards the right bottom corner but Nyland does well to get down with a strong hand and save.

The Cherries midfielder receives a yellow card for a foul on Ince as Reading counter-attack.

The Cherries break down the right flank, Christie playing in Stacey who has acres of space on the overlap.

He cruises into the area but there isn't a clear cut-back for him.

Instead, he powers a ball across the near post, a huge deflection sending it towards goal.

Replays show it is on it's way in but Nyland has stayed big at the near post and makes the block.

Not for the first time this evening, Cook makes a top tackle.

Ince receives the ball at the edge of the area and looks set to pull the trigger but Cook does well to dart back and make the sliding challenge and clear the danger.

Some of the build-up play

This has been a fantastic display so far.

The confidence is flowing through the boys and the interplay is verging on brilliant at times. On the right, Stacey takes a Reading player out of the game with a fake cross, allowing space for Christie to deliver into the middle.

That's not to say that Reading don't look capable too, they've looked a threat at times with the attacking players they have at their disposal.

Dom is loving the Royals! 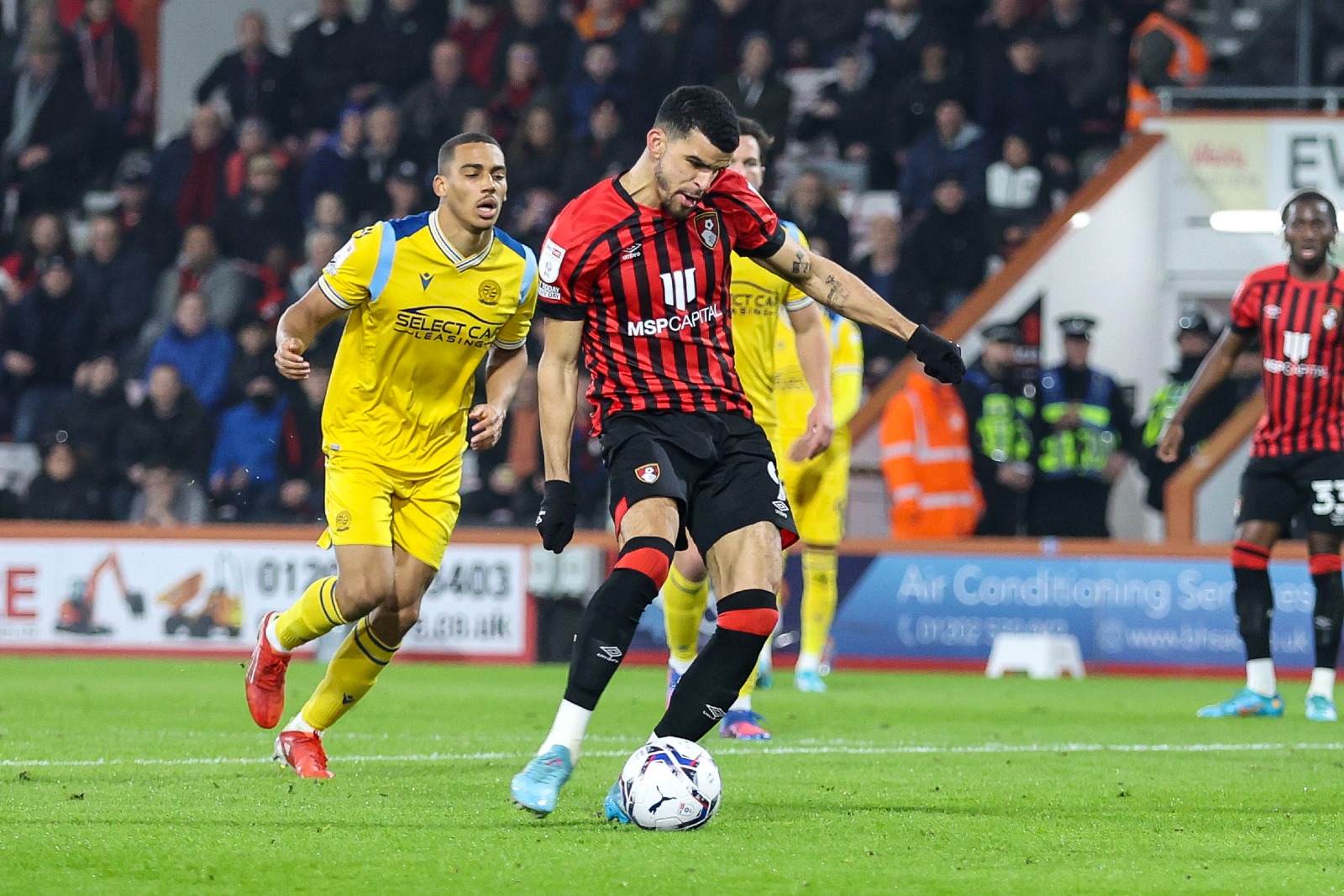 It took the Cherries man just seven minutes to get on the scoresheet this evening.

That makes it his fourth goal against Reading in his last four matches against them.

Tom Ince clips a ball in from the right and Lucas Joao meets it in the middle.

Travers does well to get a hand on it and help force it clear.

As the ground sings the name of Cherries winger David Brooks, Lerma and Solanke link up in fashion he'd be proud of.

Zemura drives inside from the left, finding Solanke with his back to goal.

He finds Lerma in the middle of the area and continues his run, receiving the ball back from Lerma's brilliant flick.

The Cherries have clearly identified the wide areas as weak points in Reading's set-up in the early stages and are trying the cross-field pass with regularity.

It hasn't worked yet but we did have a brief counter attack led by Jefferson Lerma, but his chipped ball to Anthony was cut out.

Jordan Zemura receives an early ticking off for a late challenge deep in Reading's half.

The Cherries get us underway at Vitality Stadium!

The lights show is in full flow, 'Power' is playing and the two teams make their way to the pitch! 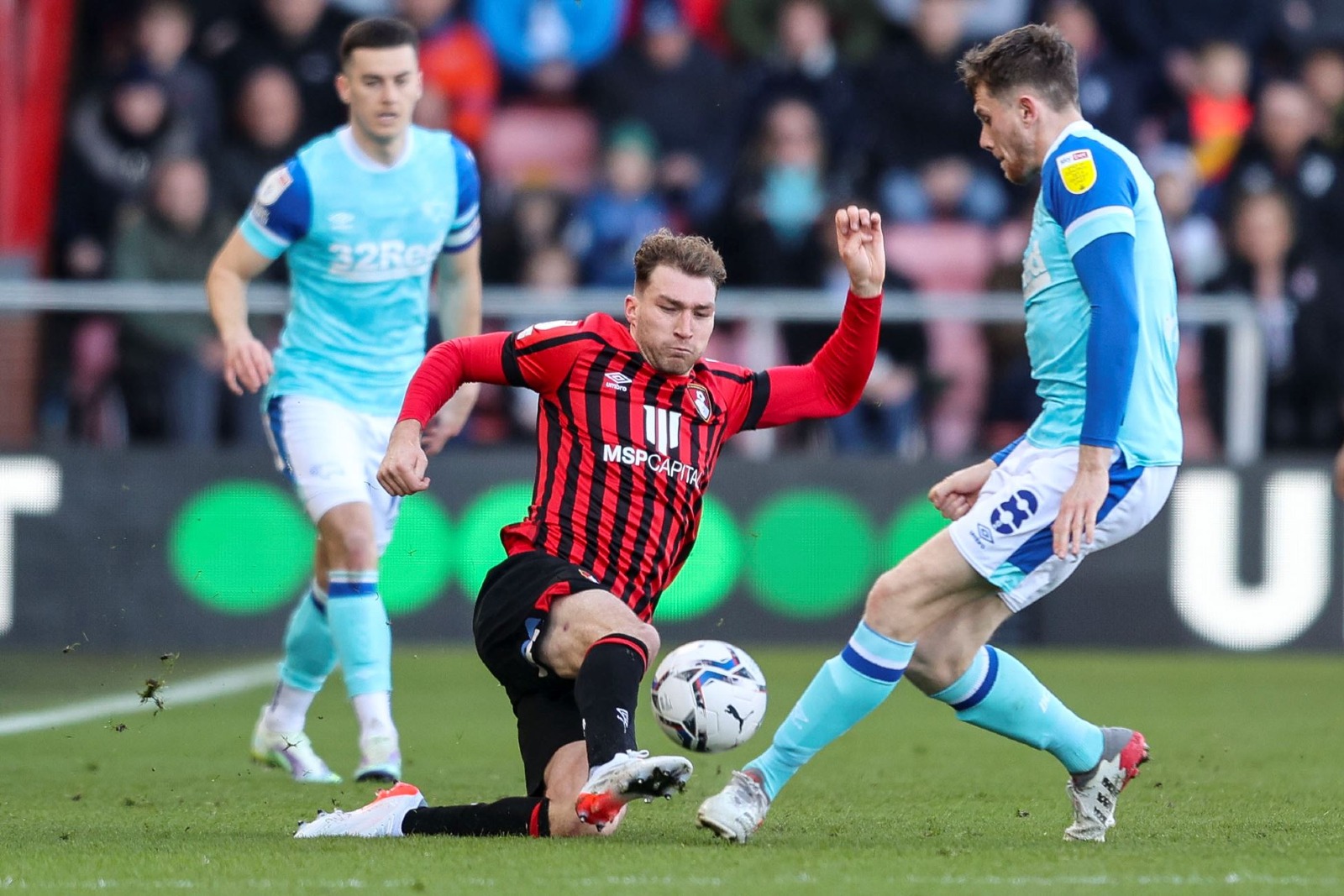 The right-back is in the starting line-up for this evening's game, against his former side.

Bracknell-born Stacey made six appearances for the Royals and was handed his Championship debut when he was 18.

“It’s a cliché, but it really is one game at a time,” said the buccaneering defender. “We know we’re in a good position and we know how quickly the games are coming around.

“We just have to focus on winning the next game. If we do that for the last 12 then we should end up in a good place.

“For me personally, I’ve played a lot of games this season and have enjoyed being part of the team.

“Like most other teams, we’ve had good runs and not-so-good runs. I just want to help the team get across the finishing line." 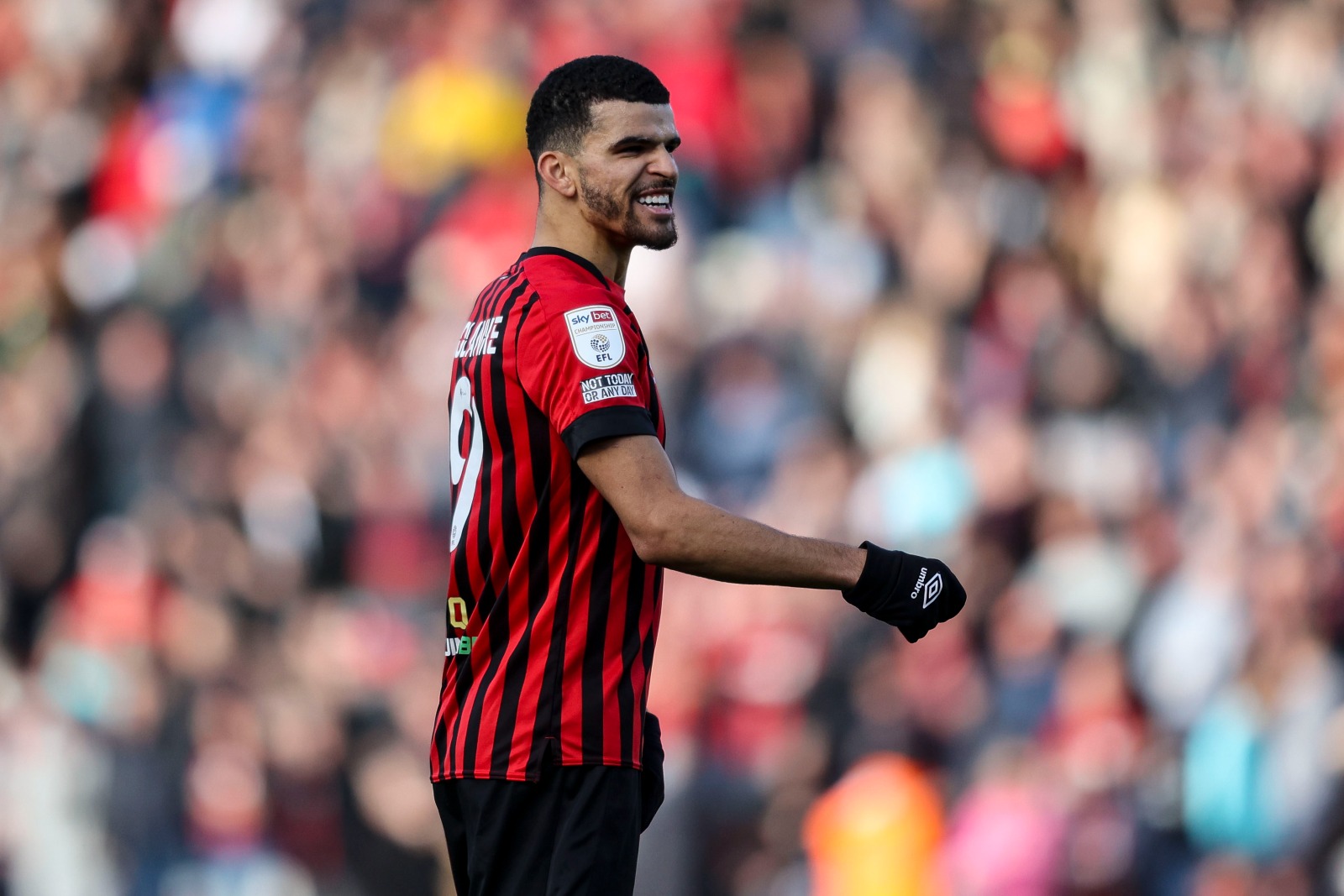 It's been a brilliant season for Dominic Solanke, the Cherries forward netting 22 goals in all competitions.

He's got a great record against tonight's opponents Reading, scoring three goals in his last three appearances against them.

He headed home from close range in this season's previous meeting and scored twice in last season's home game, a memorable comeback victory.

Lewis Cook also scored in the latter game - that would be nice this evening! 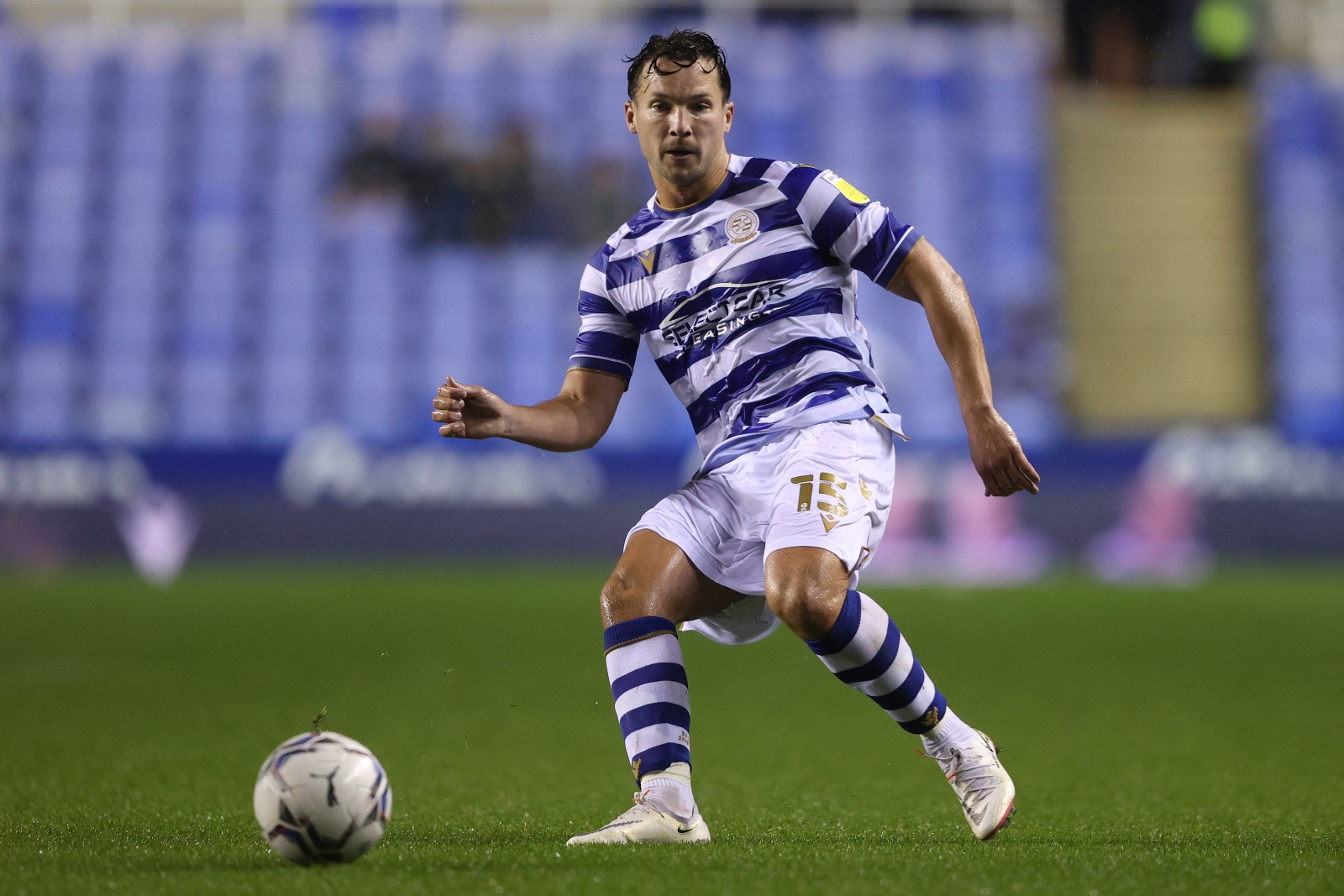 Away from the inclusion of Orjan Nyland, there's a few other names that might notice in their squad.

Midfielder Danny Drinkwater is named in the line-up. The Chelsea player has won the Premier League with Leicester City and has made three England appearances.

Meanwhile, striker Lucas Joao was named the Championship's Player of the Month for February. He scored five goals in the month, having recovered from a hip injury.

One big miss for the Royals is John Swift. The midfielder is the club's top scorer with 11 goals, as well as 13 assists, and has been involved in a massive 57% of Reading's goals this season. He's suffering from illness. 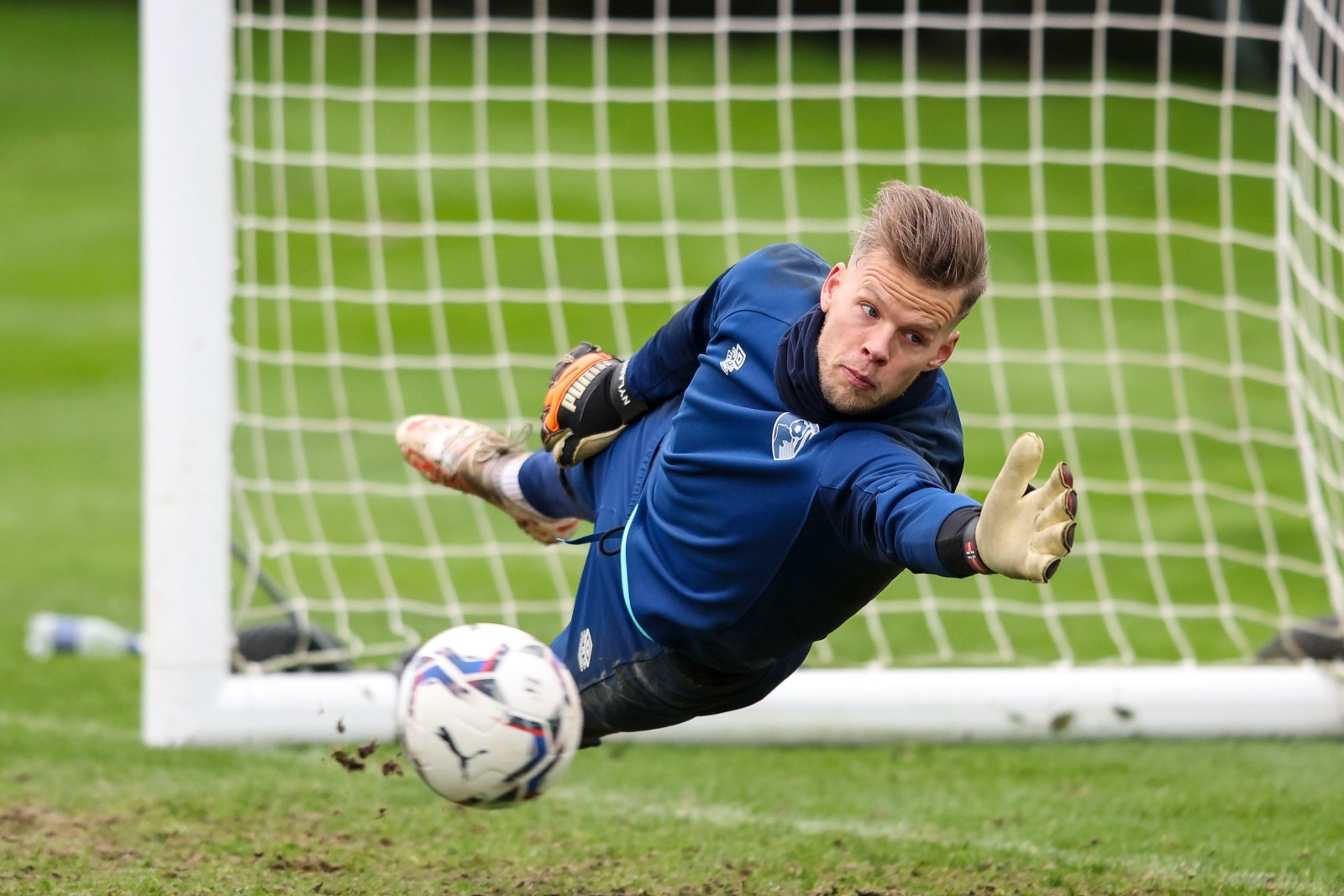 The 31-year-old shot-stopper, who is Norway's number one, spent the first half of the season with the Cherries.

He made three appearances in all competitions - one clean sheet against Hull City and the cup games with Norwich City and Yeovil Town.

He departed the club on transfer deadline day in January but spent a couple more weeks training with the side as he recovered from injury.

Nyland signed for Reading last week, following the season-ending injury to loanee Karl Hein, and will make his debut this evening.

🧤 @OrjanHNyland1 comes in to debut against his former side - Holmes, Ejaria and Joao all return to the XI.#BOUREA pic.twitter.com/khUZi76aNA

Back in the team! 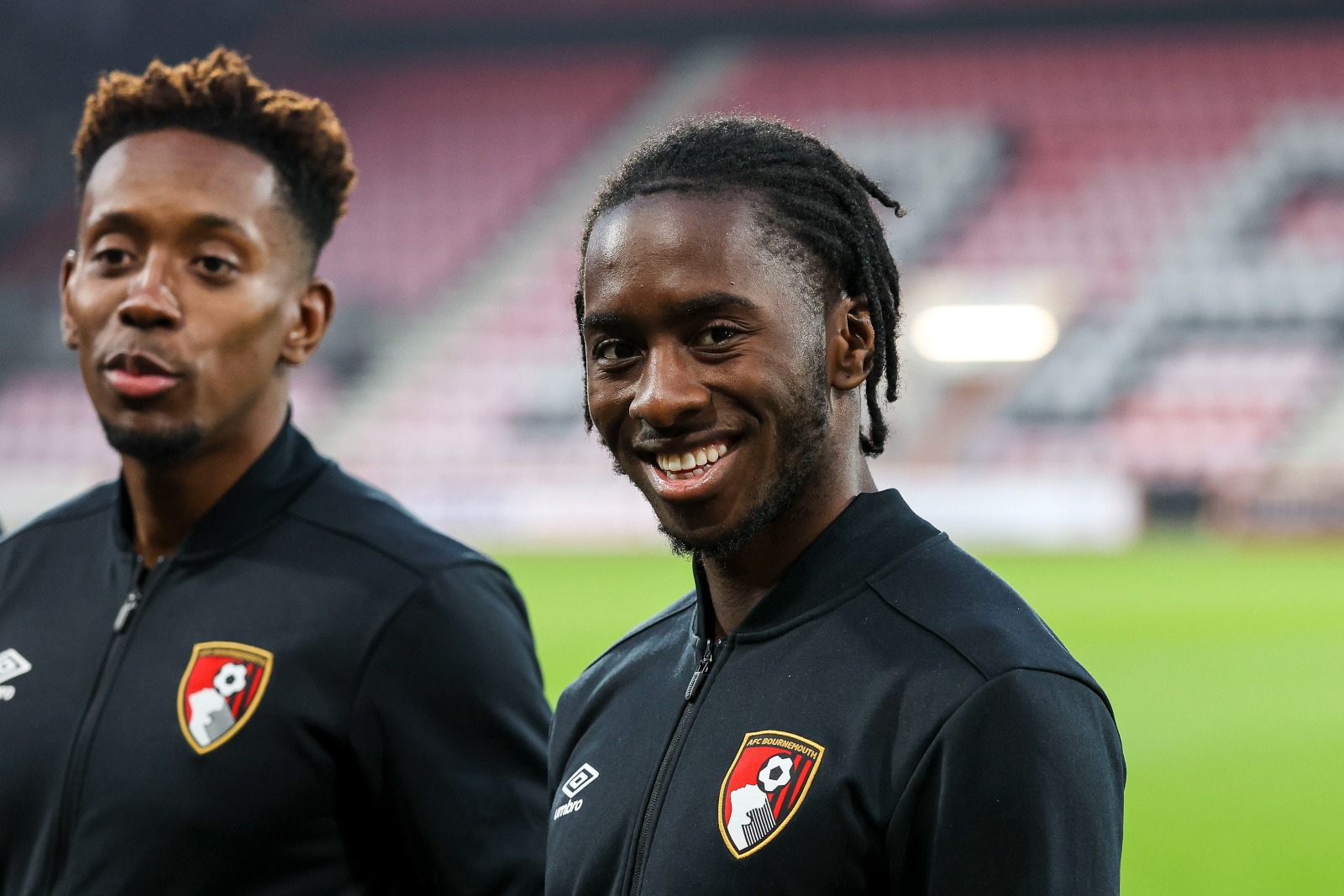 All smiles from Jordan Zemura as he returns to the team!

The 22-year-old has been named in the starting line-up following Leif Davis' injury at the weekend.

Ethan Laird is also named on the substitutes bench. 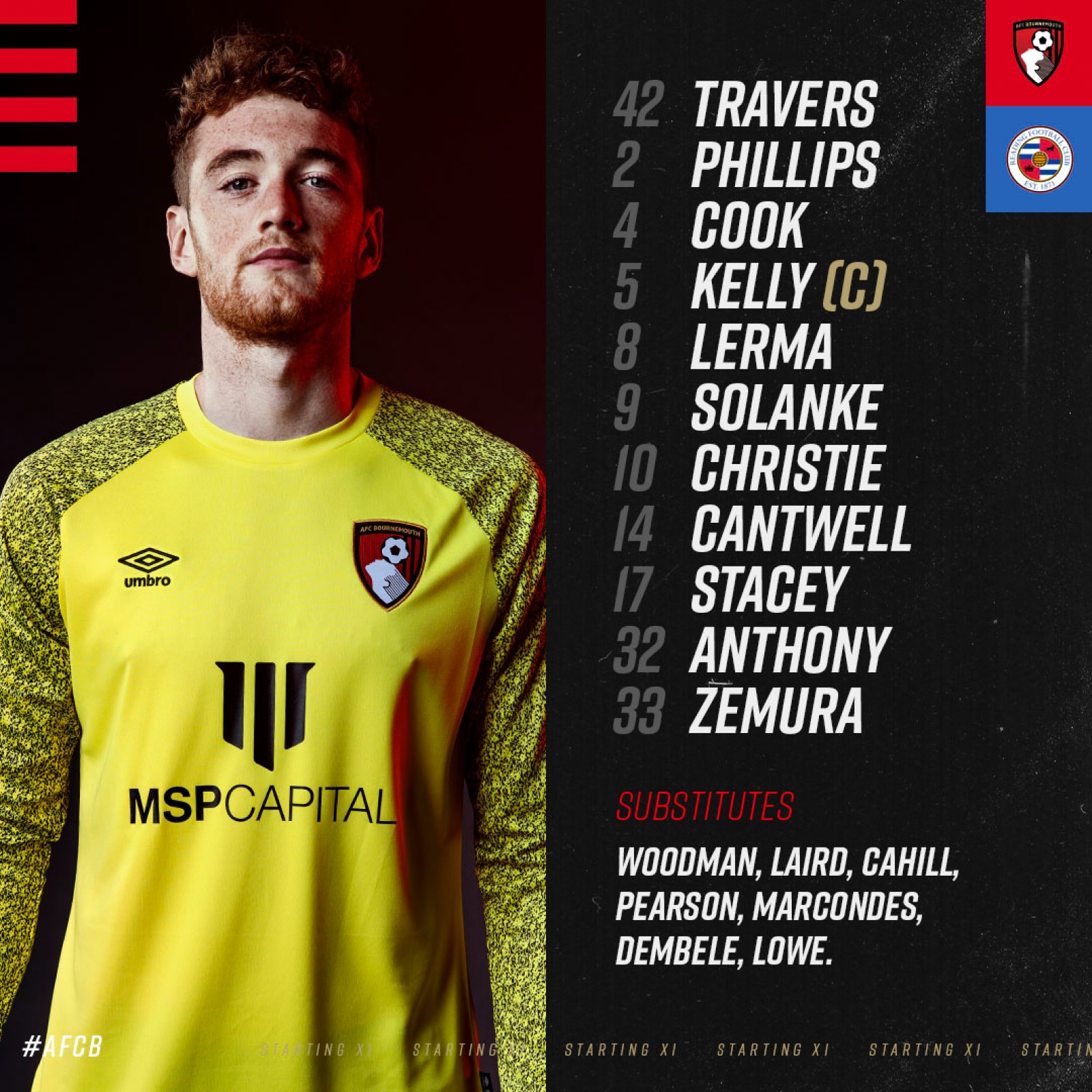 Scott Parker makes one change to the squad that takes on Reading this evening.

Injury forces Leif Davis out of the squad and Jordan Zemura is named in the starting line-up.

On the bench, Ethan Laird comes in.

Welcome to our live coverage 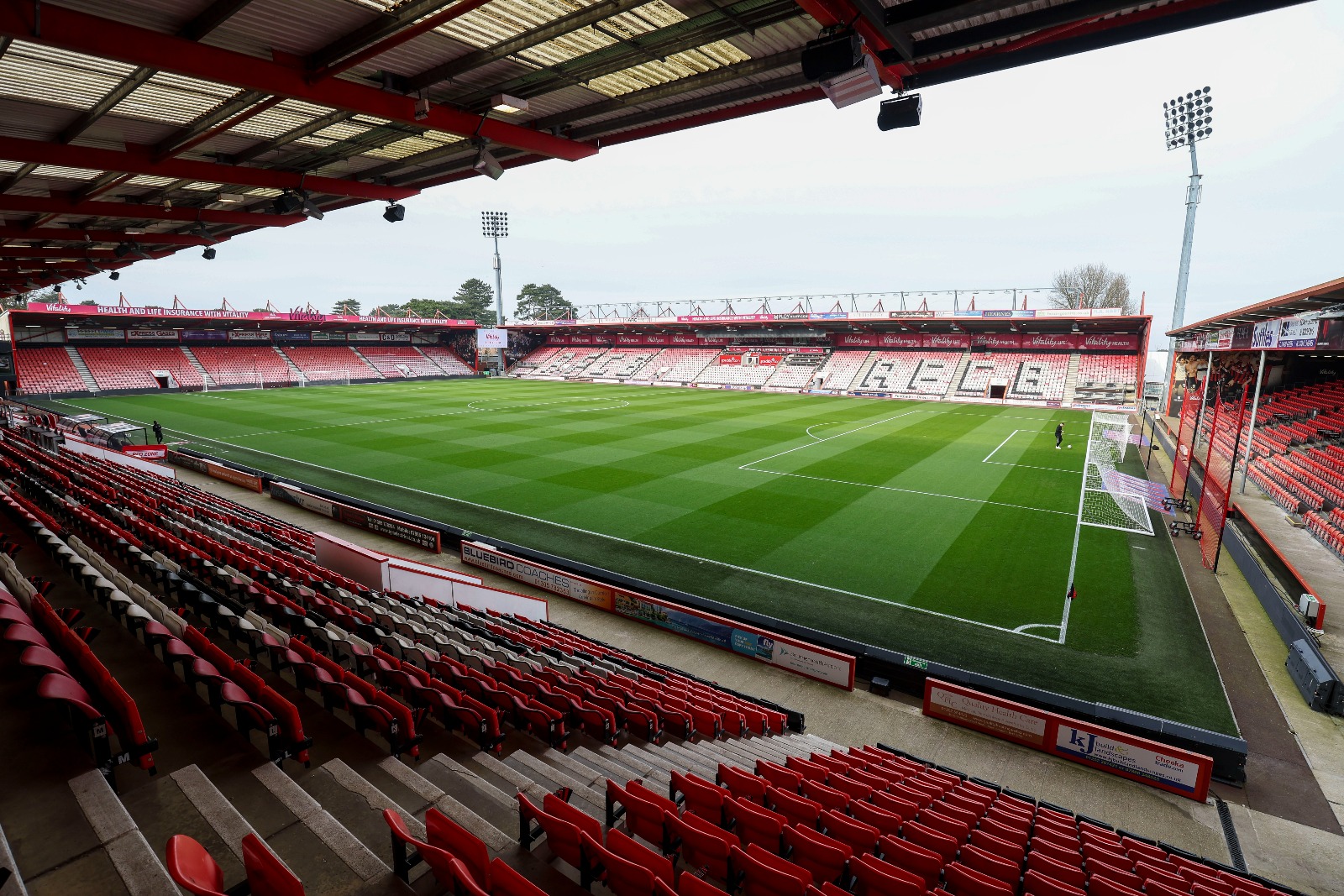 Thank you for joining our live coverage for tonight's game against Reading at Vitality Stadium.

The Cherries will be looking to make it two successive wins in a row ahead of a busy run-in to the season.