Top of the pile 😍 pic.twitter.com/4bPhbFU4iR

We keep on moving ✊ pic.twitter.com/ZYXB9SWs6H 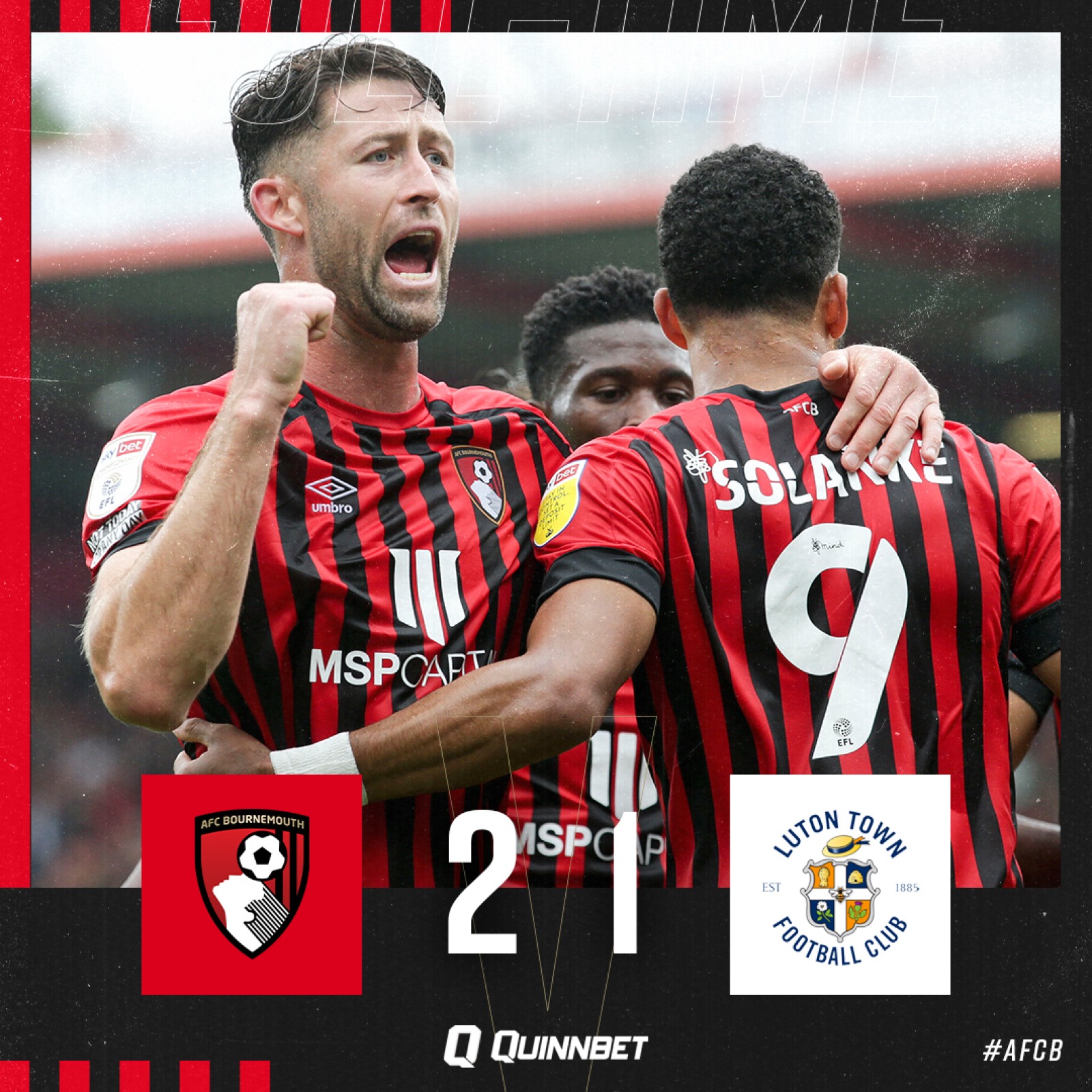 A hard-fought second half but the Cherries stand firm to secure all three points and make it four wins in a row!

Free-kick comes to nothing

The Cherries players are throwing themselves to win headers and win a free-kick in the process.

A minute or so to go.

A yellow for the substitute for a foul on the half-way line.

The Luton manager exchanges words with a Cherries supporter who takes a moment to throw the ball back and earns himself a yellow card. 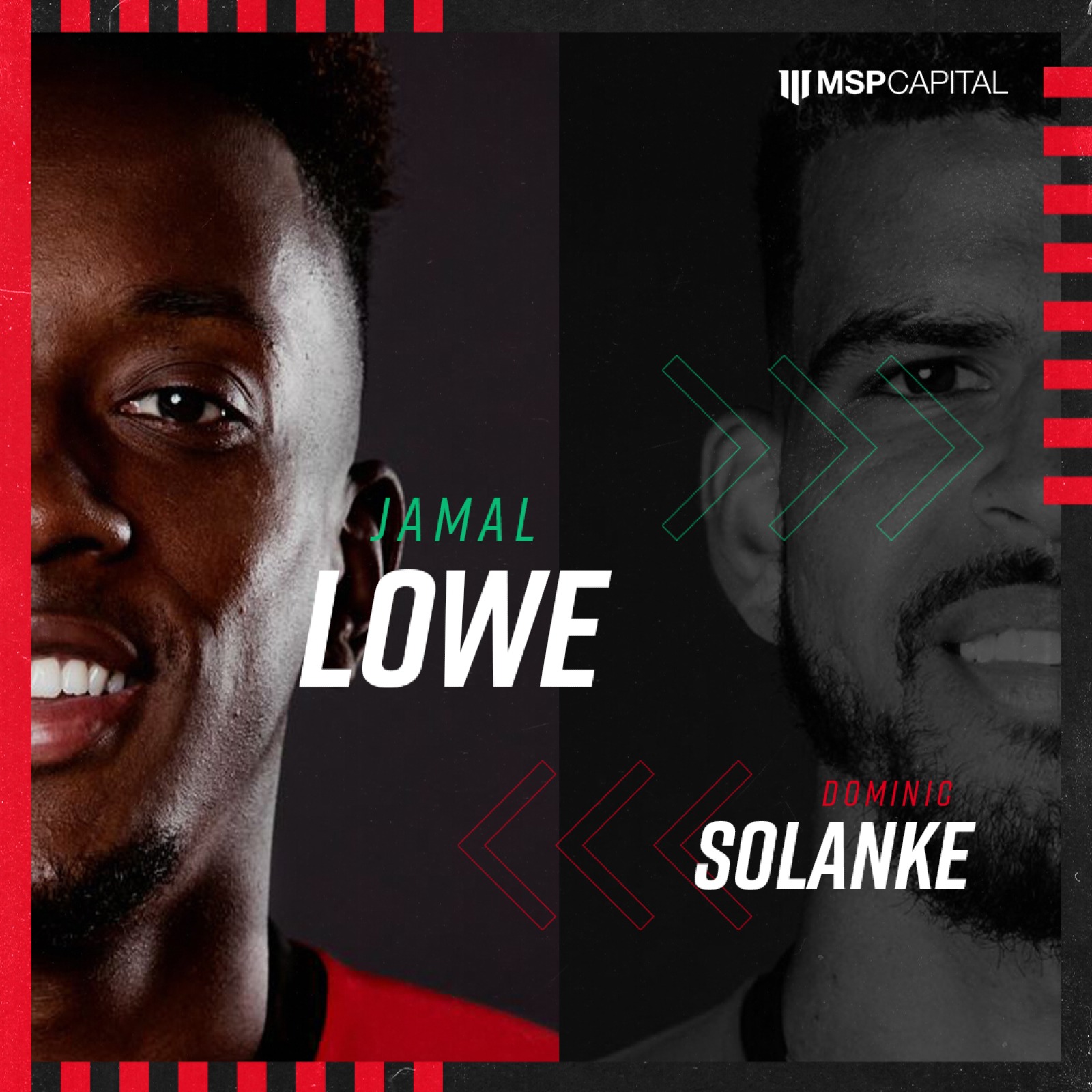 Jamal Lowe comes on for Dominic Solanke for the final few minutes.

Luton have an excellent chance as a cross finds Adebayo completely unmarked in the box.

However, he times his header all wrong and it goes well wide.

Rogers plays in Zemura on the left and his low cross just evades Smith at the back post.

Luton win a free-kick in a crossing position and Lansbury's deep delivery is touched towards goal by Naismith.

However, Travers is alert at his near post to make the catch. 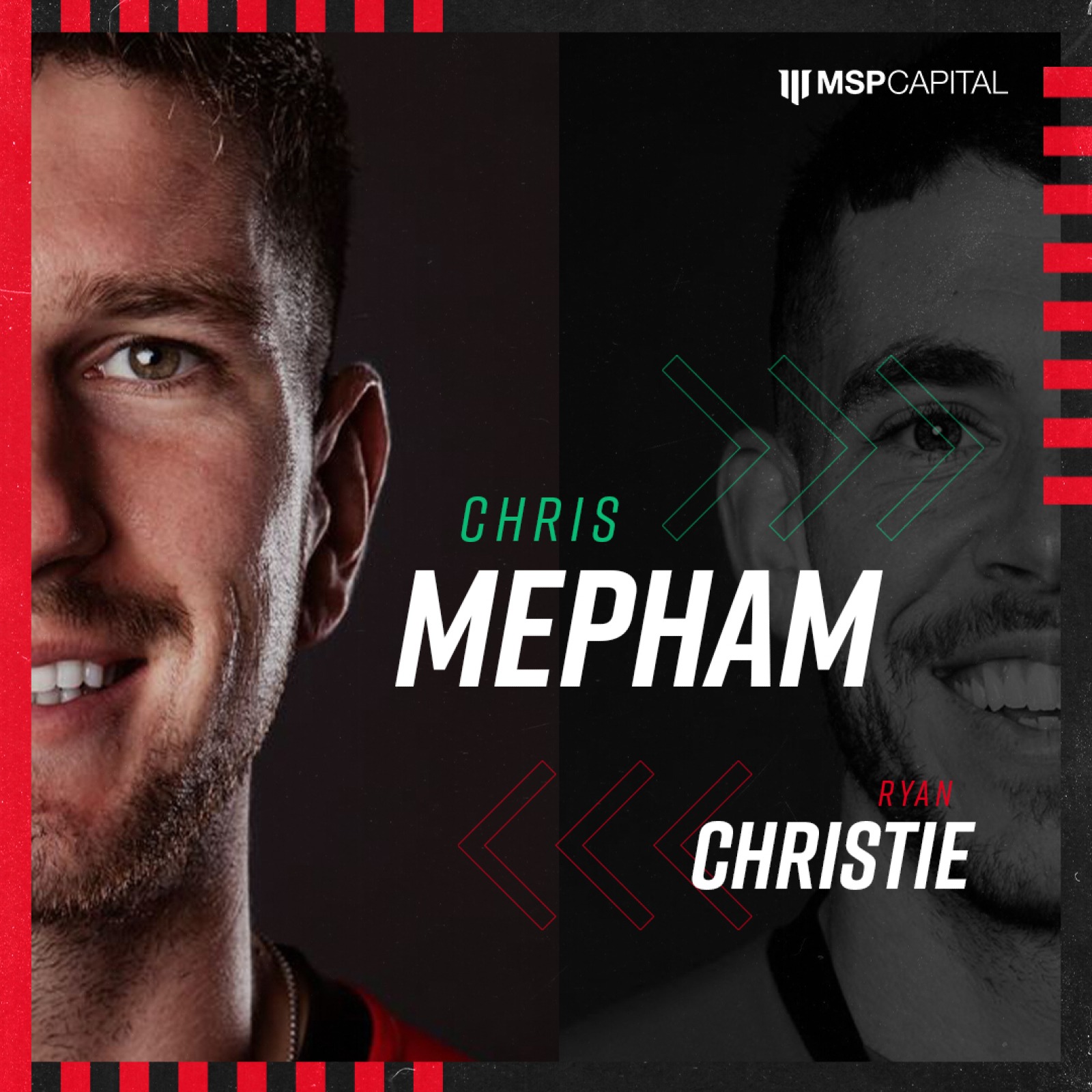 Chris Mepham is the man who replaces him.

Harry Cornick is replaced, the former Cherries man receiving a good ovation from our fans. 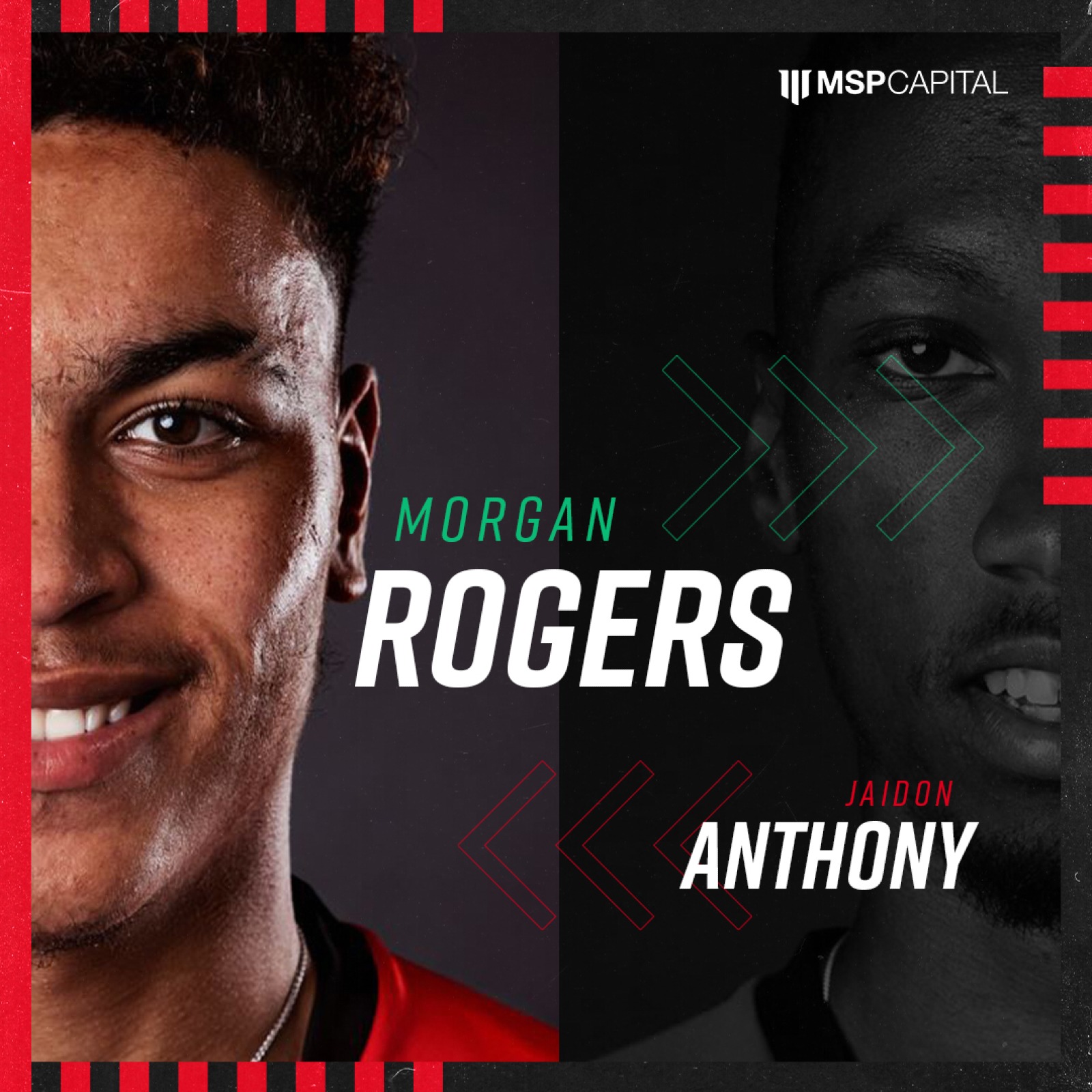 Morgan Rogers comes on for Jaidon Anthony for the final 20 minutes.

A change for Luton

A big challenge for the Cherries now

We've been in this position twice this season, once drawing with Blackpool and the other holding on to the win over QPR.

The key is to stay calm and keep playing the game on our terms.

It's an own goal by Lloyd Kelly.

Luton win a corner on the right flank and play it short. The Cherries initially get it clear but the visitors keep it alive and Luke Berry drives the ball across the box.

Burke misses the tap-in but it bounces off Kelly behind him and into the net.

Nothing the Cherries skipper could do about that.

Brilliant skill by Anthony as he lifts the ball over the defender, who has rushed in to make the tackle on the left touchline.

He finds Billing who spreads it to Christie. The winger backheels it into the path of Lerma and he drills a cross in across goal.

Anthony is arriving at the back post but Luton clear it away.

You get the sense the next goal is big here

The Cherries might hold a 2-0 lead here but you could see Luton come alive should they get the next goal.

We're getting into some decent areas too and a third goal will hopefully settle any nerves.

We've got an interesting 10-15 minutes in store.

Two massive headers from Lloyd Kelly and Ben Pearson earn a roar from the Cherries fans.

Kelly wins a big header against Adebayo before Pearson makes sure he gets to a 50-50 and finds Anthony with it too.

The young winger whips a dangerous cross towards Solanke but a Luton defender makes a good clearance.

The Cherries are having to ride out the storm a bit here.

Adebayo makes a run down the right wing and fires the ball across the box.

It curls inside and threatens Travers, so the Cherries shot-stopper pushes it over the bar.

The resulting corner doesn't come to anything.

Luton giving it a go

As you might expect, Luton have come out for this second half with a real pace and purpose.

Both Kelly and Cahill have had to make good defensive headers as the visitors fire balls across the box.

Pearson gets a yellow card for a high foot about five yards outside the box and Lansbury whips the free-kick into the box.

Adam Smith can only glance the ball on at the near post and it looks destined for the far corner but for a brilliant save by Mark Travers!

Luton kick-off this second half and immediately aim the ball towards the right side of the box, where they have three people sprinting forward.

No surprise Lloyd Kelly wins the header though.

The visitors have made a half-time substitution and Amari'i Bell will play this second half, replacing Gabriel Osho.

What can you say about this header? 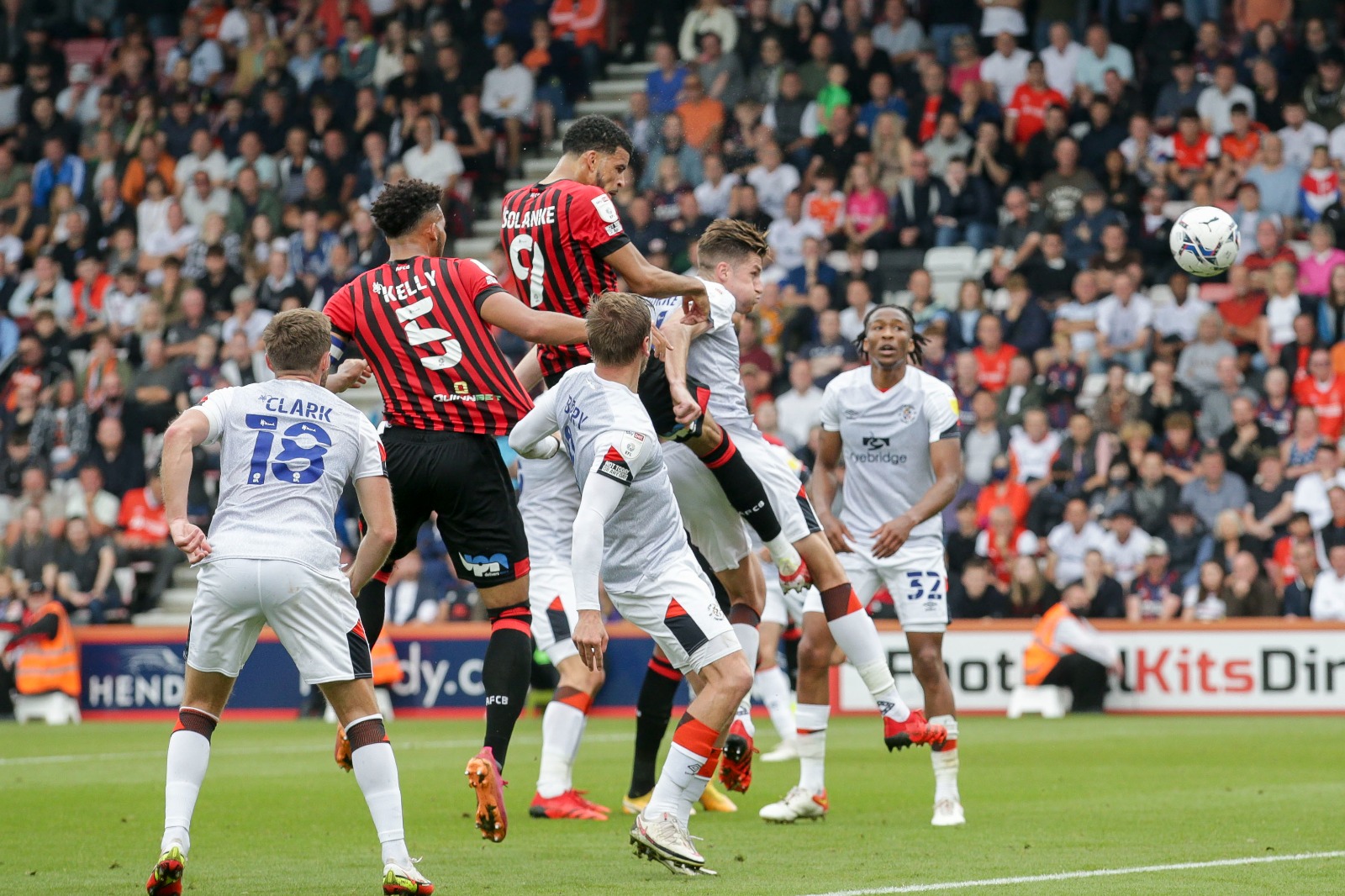 Dominic Solanke has had an excellent start to the season, netting his seventh goal in all competitions today.

His header today was brilliant, it was a tough one with a clipped cross that didn't have much power on it and a standing jump, but he's placed it perfectly.

It's hit the inner side-netting on Sluga's right side and the goalkeeper had no chance.

An excellent first half

Scott Parker will be pleased with his side after that first half.

Ryan Christie has shown some real quality on the right flank and has chipped in with two assists.

Gary Cahill and Lloyd Kelly have been solid at the back, coming up against Elijah Adebayo who has caused a few problems.

We're getting used to this sight 😍 pic.twitter.com/lWigzJ6Gqv 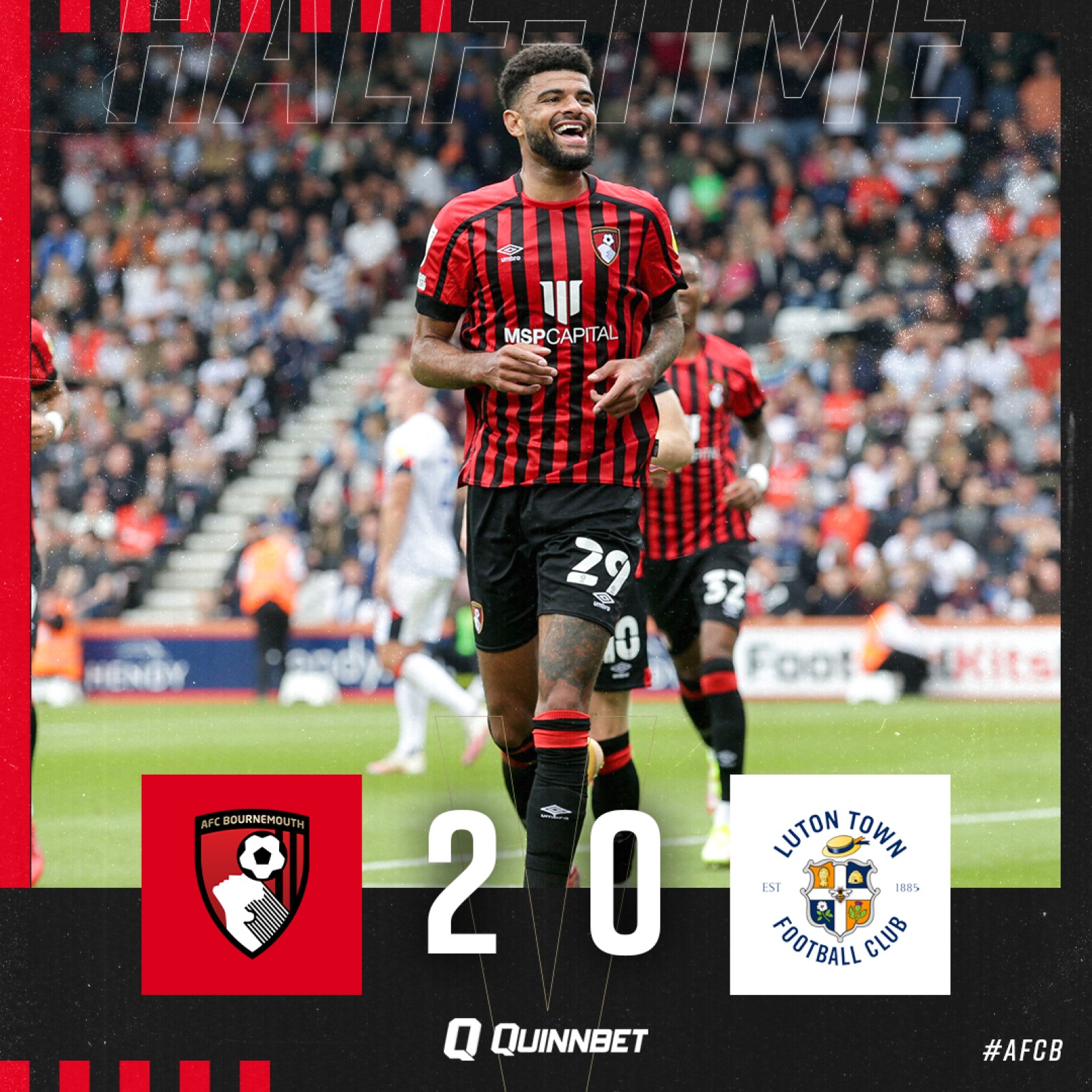 A good first half at Vitality Stadium!

Jordan Clark looks to get beyond the back-line as he receives a throw but Cahill gets across and makes a good block.

The young winger fires wide from the edge of the box!

It came from excellent build-up play again as Billing, under pressure in the middle of the park, flicked it to Lerma.

He played it into Anthony who shifted onto his right foot and drilled just wide.

It should be three!

Sluga makes a huge mistake in the Luton goal as he slips while making the clearance.

It falls to Lerma at the edge of the box but by the time he gets it under control, a defender has got across to block the goal.

He shifts it onto his right foot and fires, but it's deflected wide of the right post. 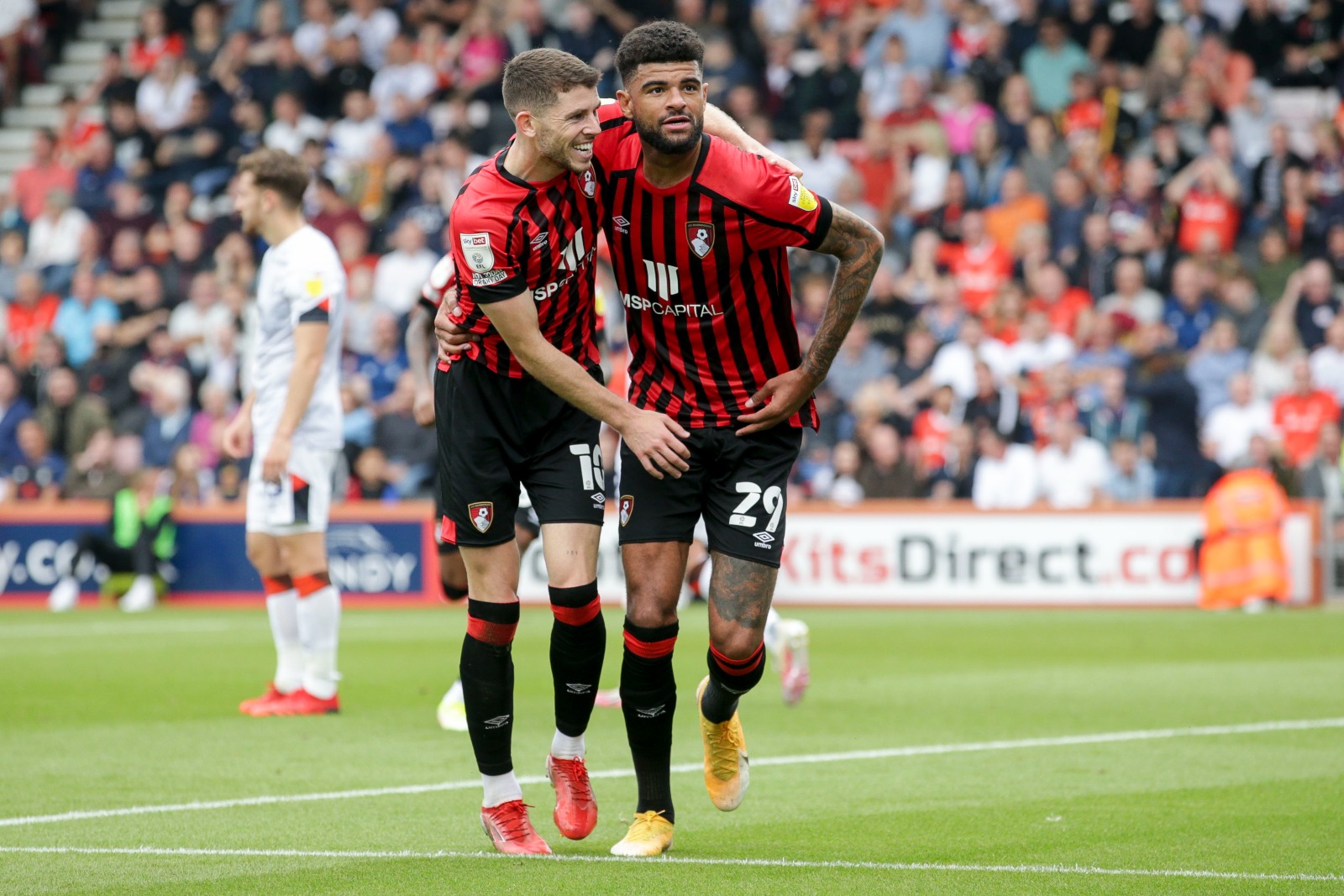 What a day it's been for Ryan Christie so far!

The summer signing has assisted both goals in this game and is impressing not only with his quality, but his work ethic too.

Dominic Solanke is on fire!

Ryan Christie is once again the creator as he clips a lovely cross into the box following a short corner.

Solanke rises highest in the middle and his header isn't powerful but it's placed to perfection and finds the far corner.

Ruthless from the Cherries!

Cahill and Kelly are not getting an easy ride from the visitors, Adebayo's pace and channel running is causing problems and he wins a free-kick on the left flank.

The delivery is towards the near post where Lockyer rises highest but it's well wide.

The Cherries are starting to find their groove now!

Lerma receives a stunning flick from Billing in midfield and drives towards the box.

He exchanges a similarly excellent one-two with Solanke but can't quite get a shot off.

But this is excellent stuff.

Just moments after Luton had two glorious opportunities, the Cherries find the net.

Christie receives the ball from Lerma at the edge of the box and chips a beautifully weighted pass into the path of Billing, who side-foots into the corner.

Two let-offs for the Cherries

Jordan Zemura had been tackled on a roving run forward and Luton capitalised by attacking the vacant space on the right side.

Cornick drives into the box and cuts it back to Adebayo, who is only a few yards out.

The cross is slightly behind the striker and while he manages to divert it goalwards, it flies well over the bar.

Moments later, Travers found himself under pressure from Adebayo and his clearance deflects off the forward, but thankfully the Cherries man can gather.

Christie has our first shot

The Cherries have settled into the game and are dominating possession now.

The build-up is patient as Luton maintain good shape but Christie manages to have our first effort on goal.

He receives the ball from Adam Smith and cuts inside past Naismith, but his shot aimed at the near post lacks power and Sluga saves comfortably.

The Luton fans are in fine voice in the East Stand and sing Mick Harford's name.

Harford is a Luton legend, who is currently fighting prostate cancer and Cherries full-back Jack Stacey, who was promoted twice with the Hatters, has nothing but good words to say about him.

Everyone connected with the Cherries wishes him well.

Early fright for the Cherries

Luton have clearly identified the Cherries left-side as an area to attack in the early stages, Cornick sending a good cross into the box within the first two minutes. Cahill gets a vital touch to take it away from any attackers.

Soon later, Berry finds himself beyond the back-line but his low cross is blocked by Kelly, Travers able to collect.

Jefferson Lerma kicks the game off for the Cherries,

A packed out Vitality Stadium rises to their feet as the two teams emerge from the tunnel.

The Cherries, led out by Lloyd Kelly, are in our traditional red and black stripes, while the visitors are in all-white.

Kick-off is only moments away!

Both sets of players return to the changing rooms for the final team talk ahead of kick-off.

What would you be saying to the players? 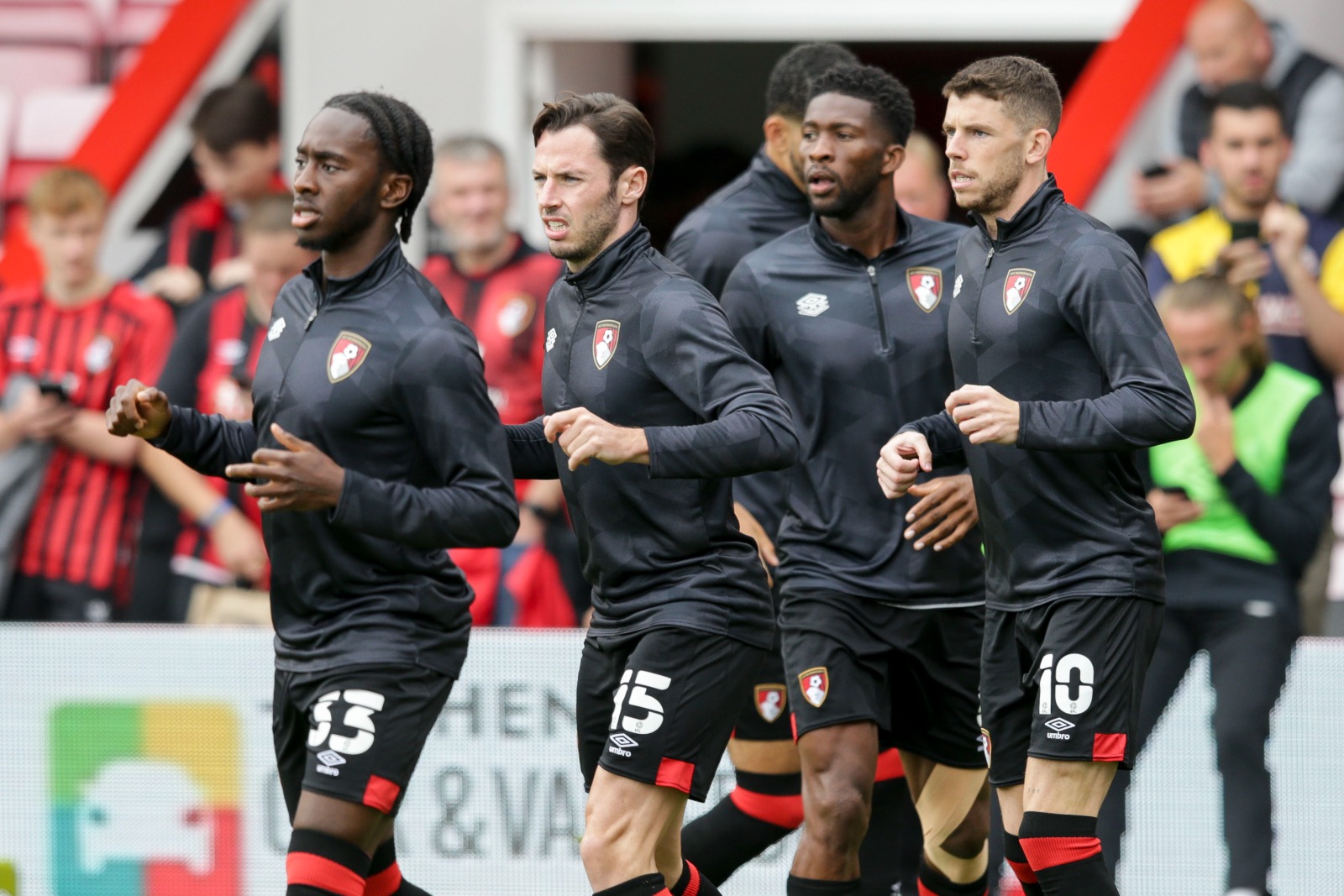 We're around 15 minutes from kick-off at Vitality Stadium.

At the moment, the lads are doing some shooting practice in-front of the Steve Fletcher Stand and they're looking sharp!

All eyes on 3pm ⏳ pic.twitter.com/6N8NqfNJCh 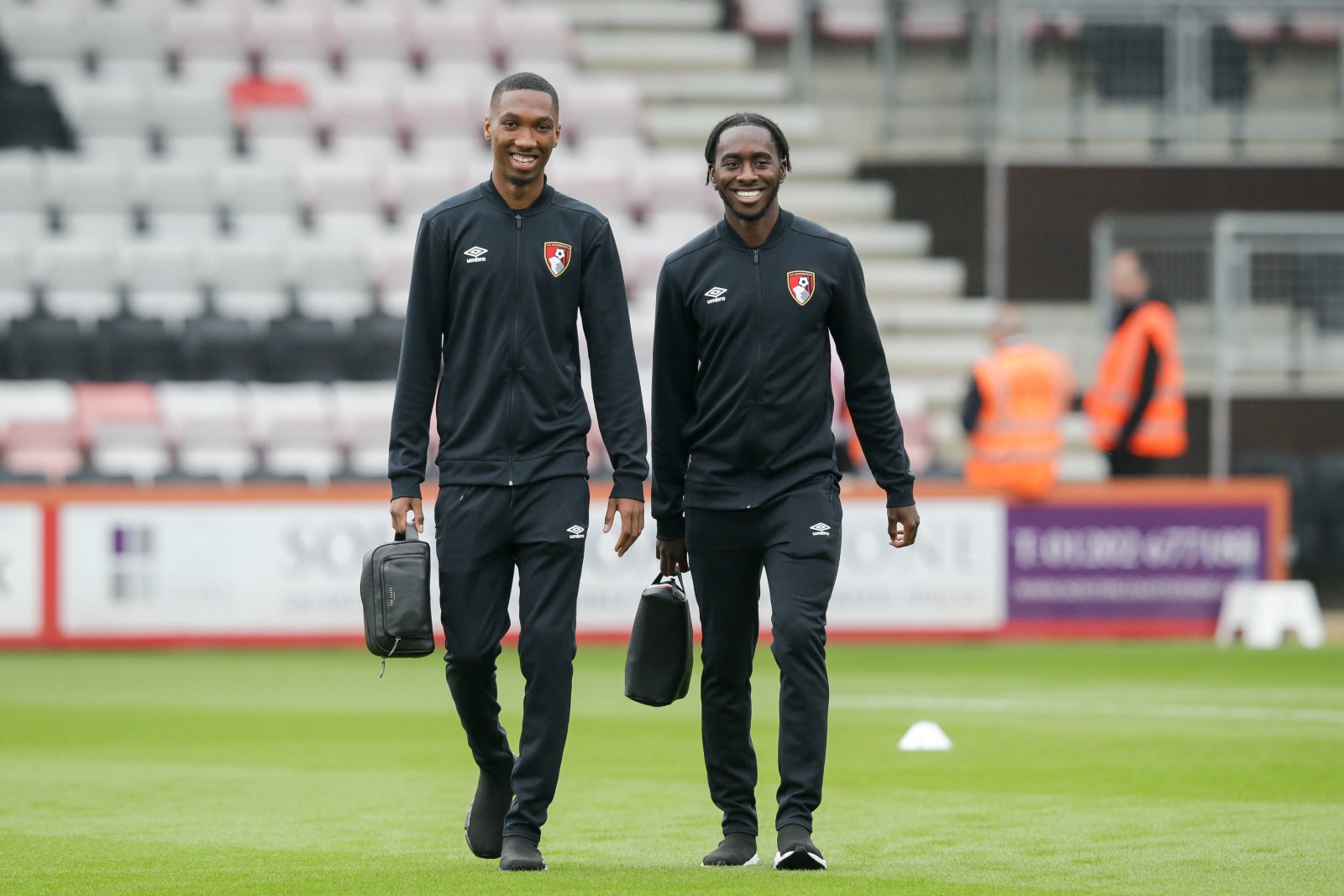 📋 One change for the Hatters...#COYH

Another tough test to come 💪@GaryJCahill previews this one 👇 pic.twitter.com/JzScpxDt2i 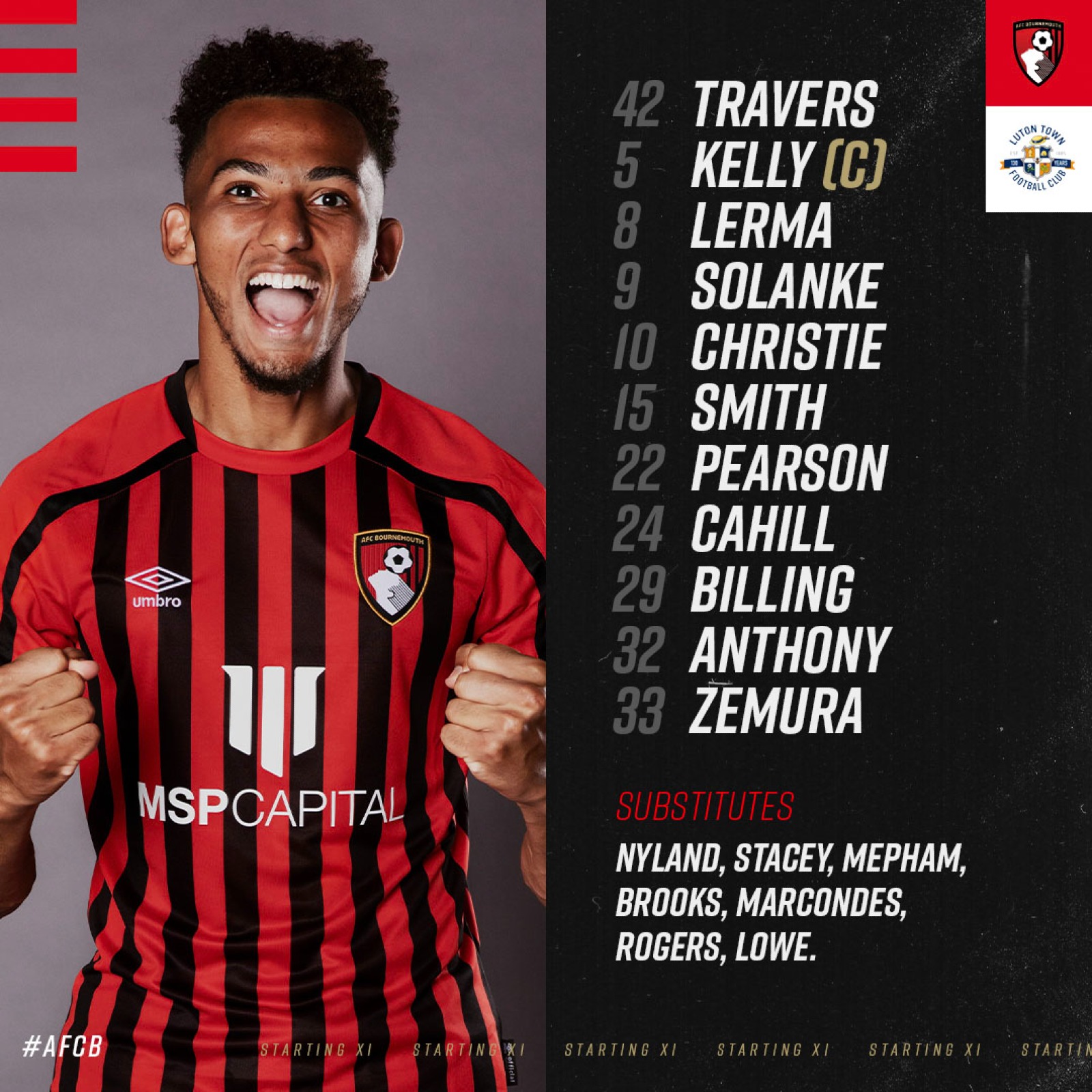 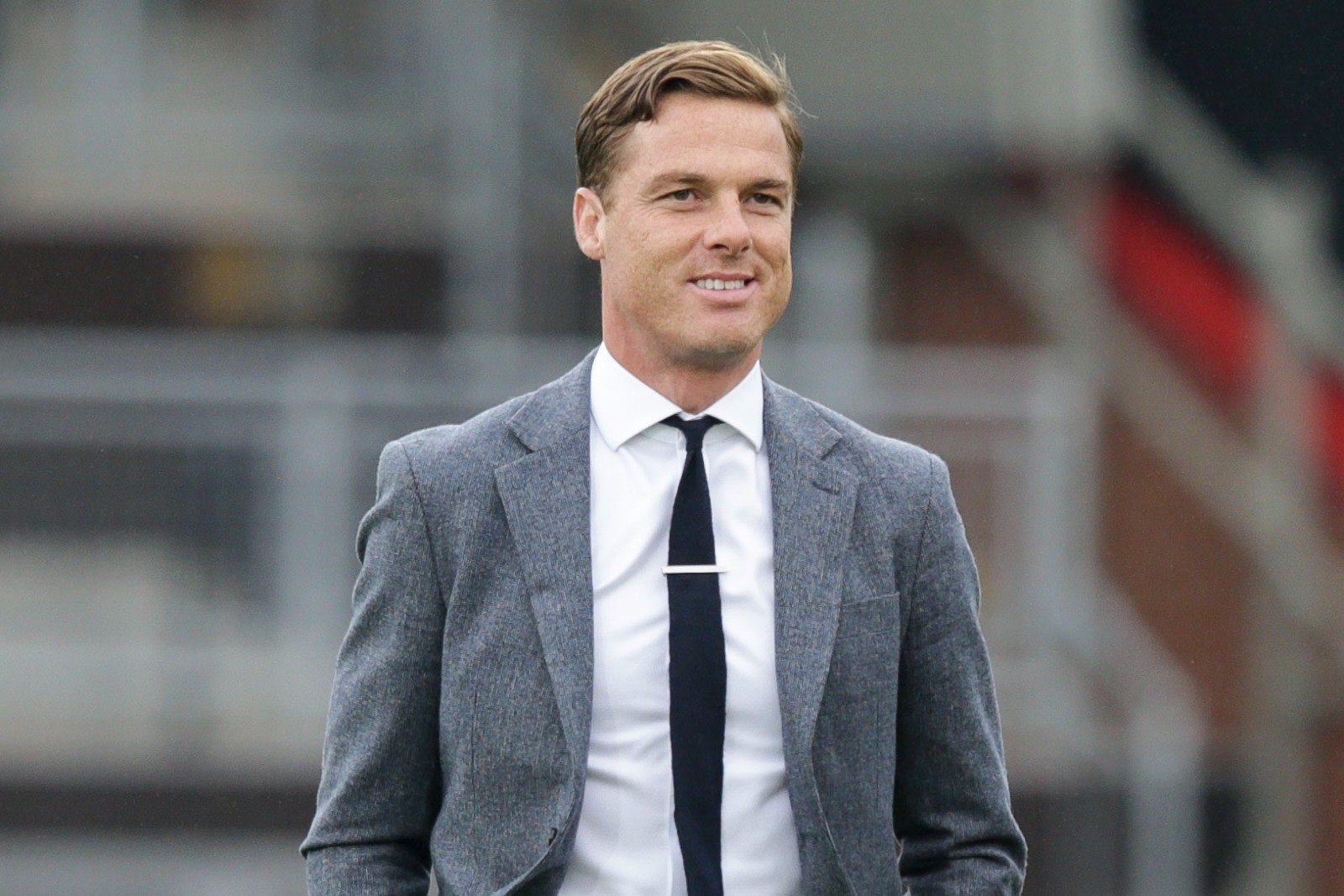 The head coach is in the building and he's full of smiles as he heads to the changing rooms. 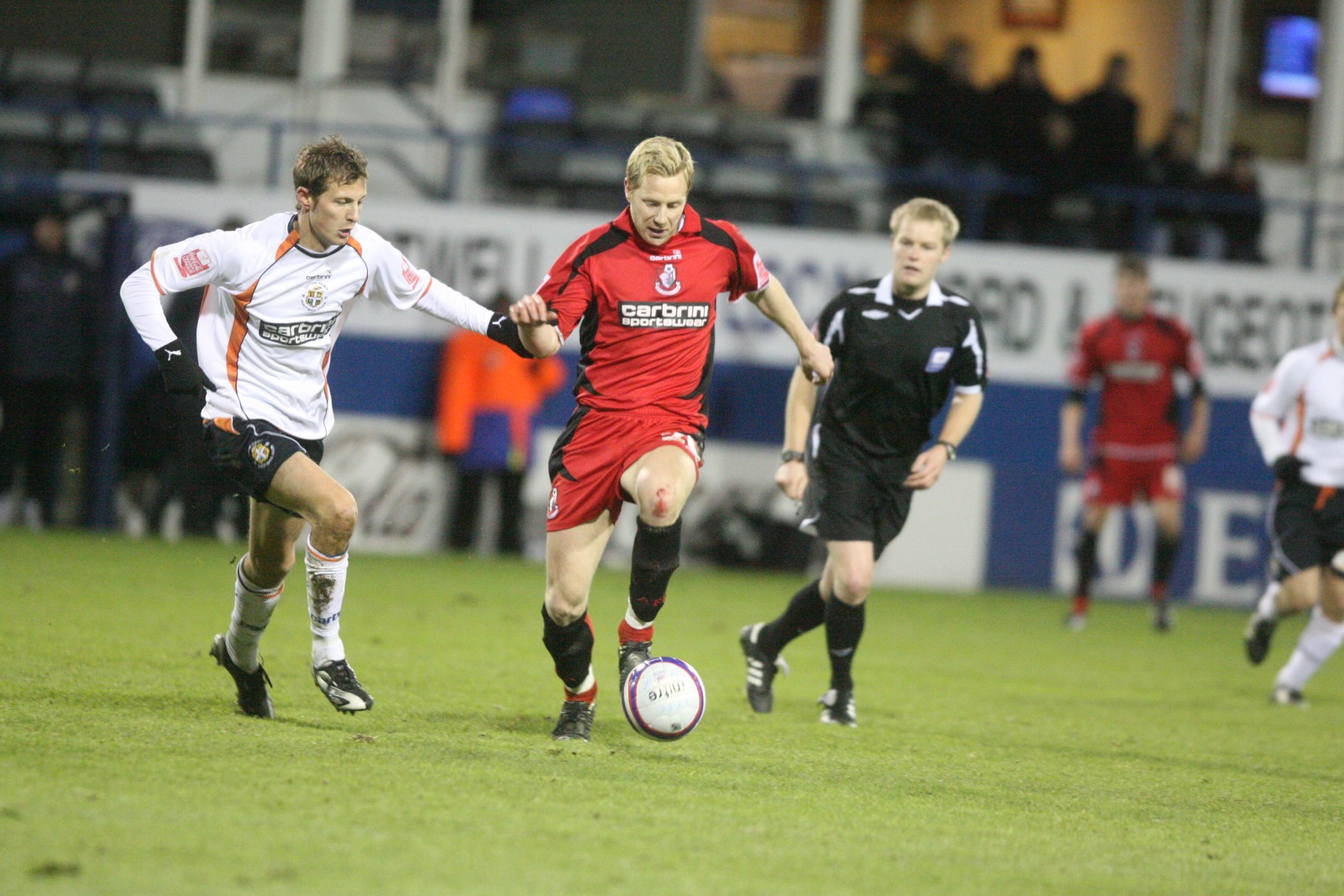 We've just been reminded of the League Two table at the start of the 2008/09 season.

In this table, both Bournemouth and Luton are sat in the bottom three, with a 17-point and 30-point deduction respectively.

For the Cherries, Eddie Howe, who became manager on New Year's Eve, led the club to the Greatest Escape on the final day, eventually leading us all the way to the Premier League, where we played for five seasons.

For Luton, they were unable to survive that season, finishing 15 points behind Grimsby who finished in 22nd.

The Hatters eventually won promotion back into the Football League in 2013/14, having lost in the play-offs three times.

The appointment of Nathan Jones in January 2016 sparked a period with two successive promotions and they're now in their third season in the second tier.

All the timings around the world 🗺

We'd love to know where you're following us from this afternoon! 🧐👇 pic.twitter.com/Sy6mrvAfj4 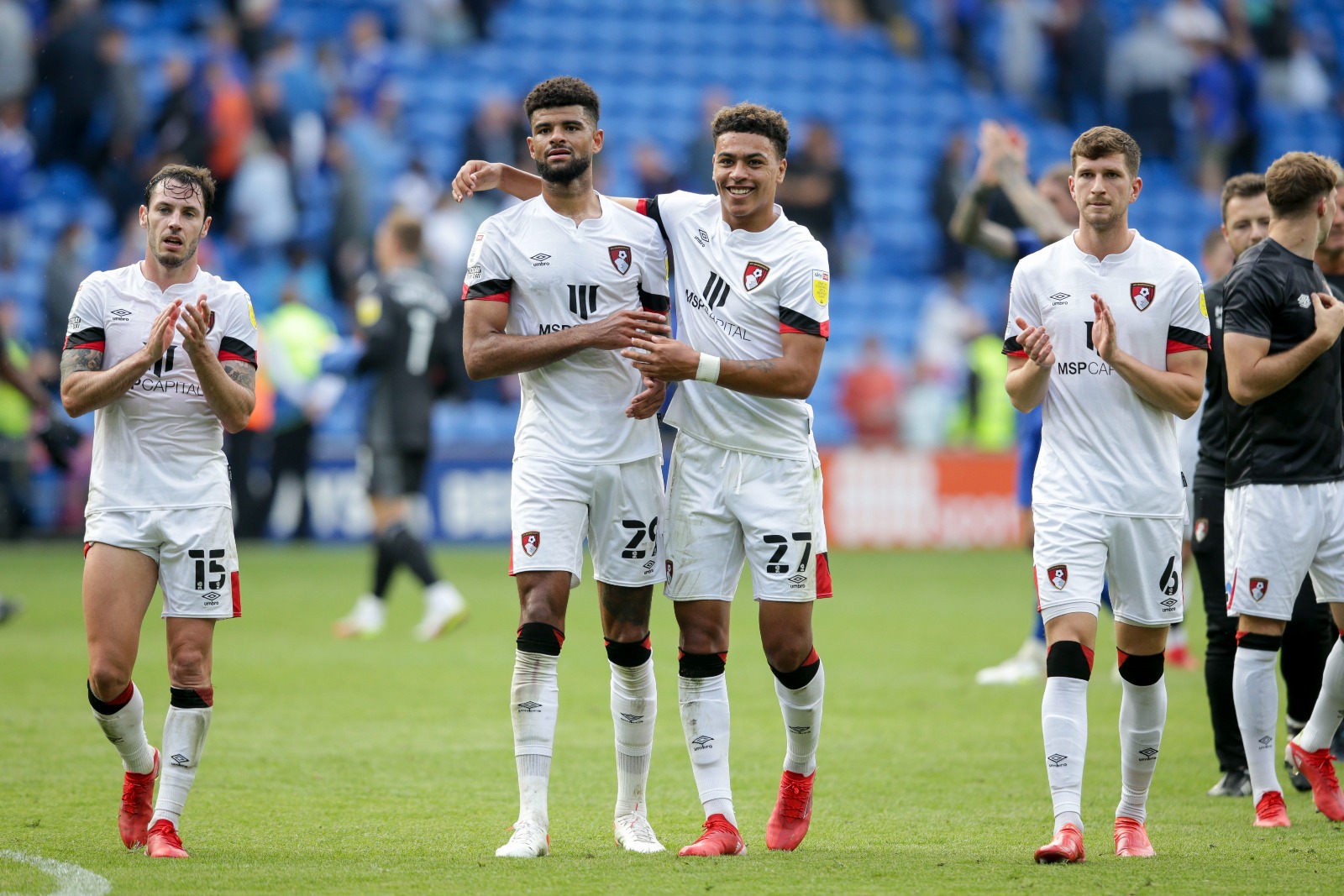 September has been a good month for the Cherries so far, hasn't it?

Scott Parker's side have a 100% record this month with wins over Barnsley, QPR and Cardiff City.

Philip Billing was the only scorer in the win in Wales, which was a superb battling performance against a physical side.

Luton will prove to be another tough challenge, having only lost twice this season so far! 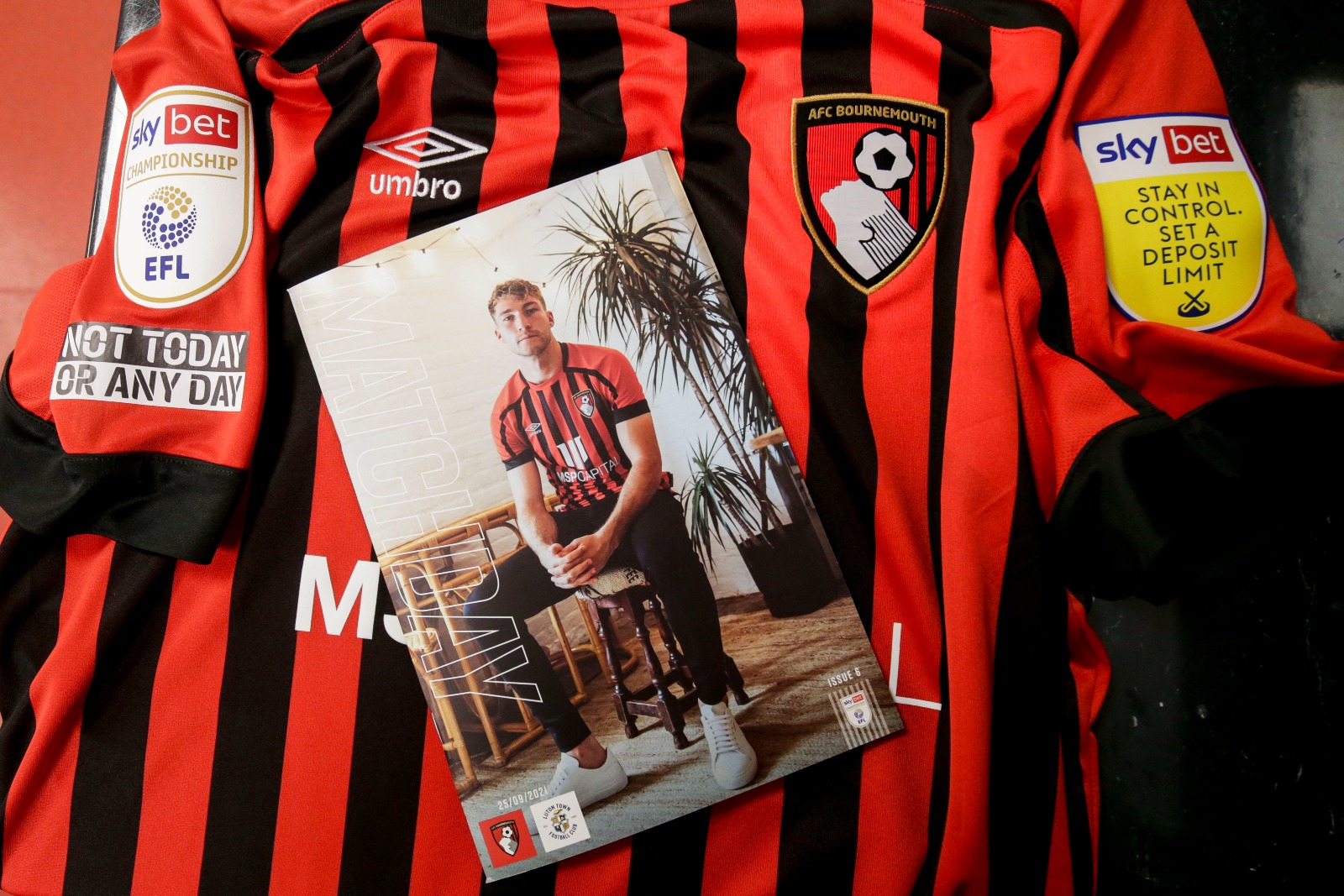 It's a busy day of sports with the Ryder Cup in full flow and Anthony Joshua fighting this evening.

However, the main action is, of course, at Vitality Stadium where the Cherries take on Luton Town!

We'll be providing full updates throughout the day.