Who would've thought that possible ten years ago? 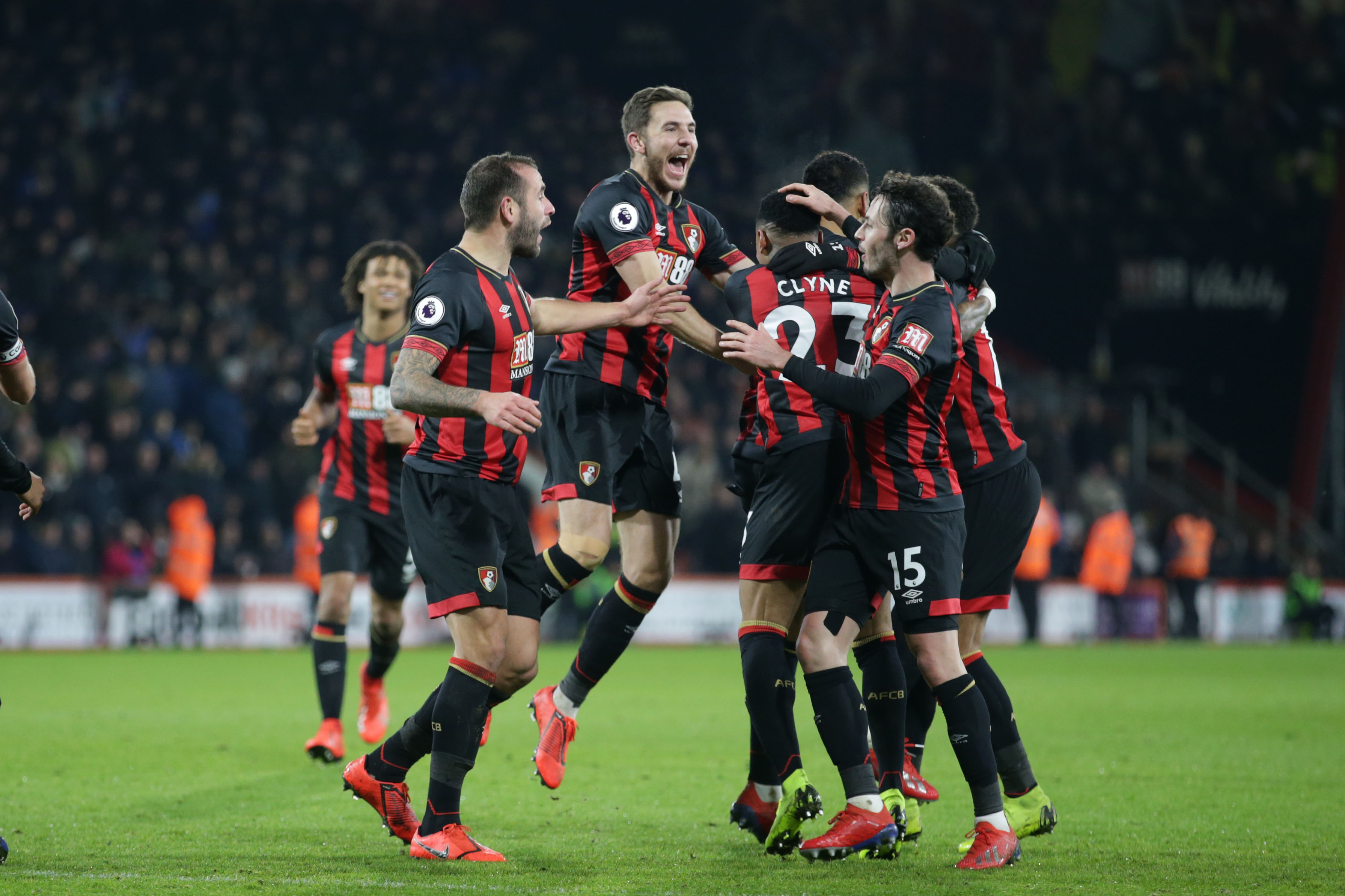 We've just put four goals past Chelsea and kept a clean sheet! It's been an incredible evening at Vitality Stadium and the Cherries fans are loving it!

Get in Charlie Daniels!

A quickly taken free-kick by Jordon Ibe is headed in by Charlie Daniels for 4-0!

A debut for Mepham!

We've been waiting a long time to see him in a Bournemouth shirt, and here he comes for his debut! Chris Mepham replaces Junior Stanislas!

A chance to make it four!

We're still hungry for more! Junior Stanislas plays a one-two with Joshua King before the former sees his shot go out for a corner. Nothing comes of the set-piece.

Daniels on for Fraser

Another fine performance from Ryan Fraser, as he's substituted by Charlie Daniels.

It's not been Chelsea's day, and after Dan Gosling gives the ball away in midfield, Willian crashes a shot past the side netting. Five minutes of stoppage time have been added, allowing the Cherries fans in full voice to savour this moment!

Seeing out the final ten

We're in cruise control, as Chelsea have had little to shout about in the second half. It looked like Dominic Solanke was getting ready to come on for his debut, but there have been very few stoppages so it's not going to go ahead.

Some second half this has been! 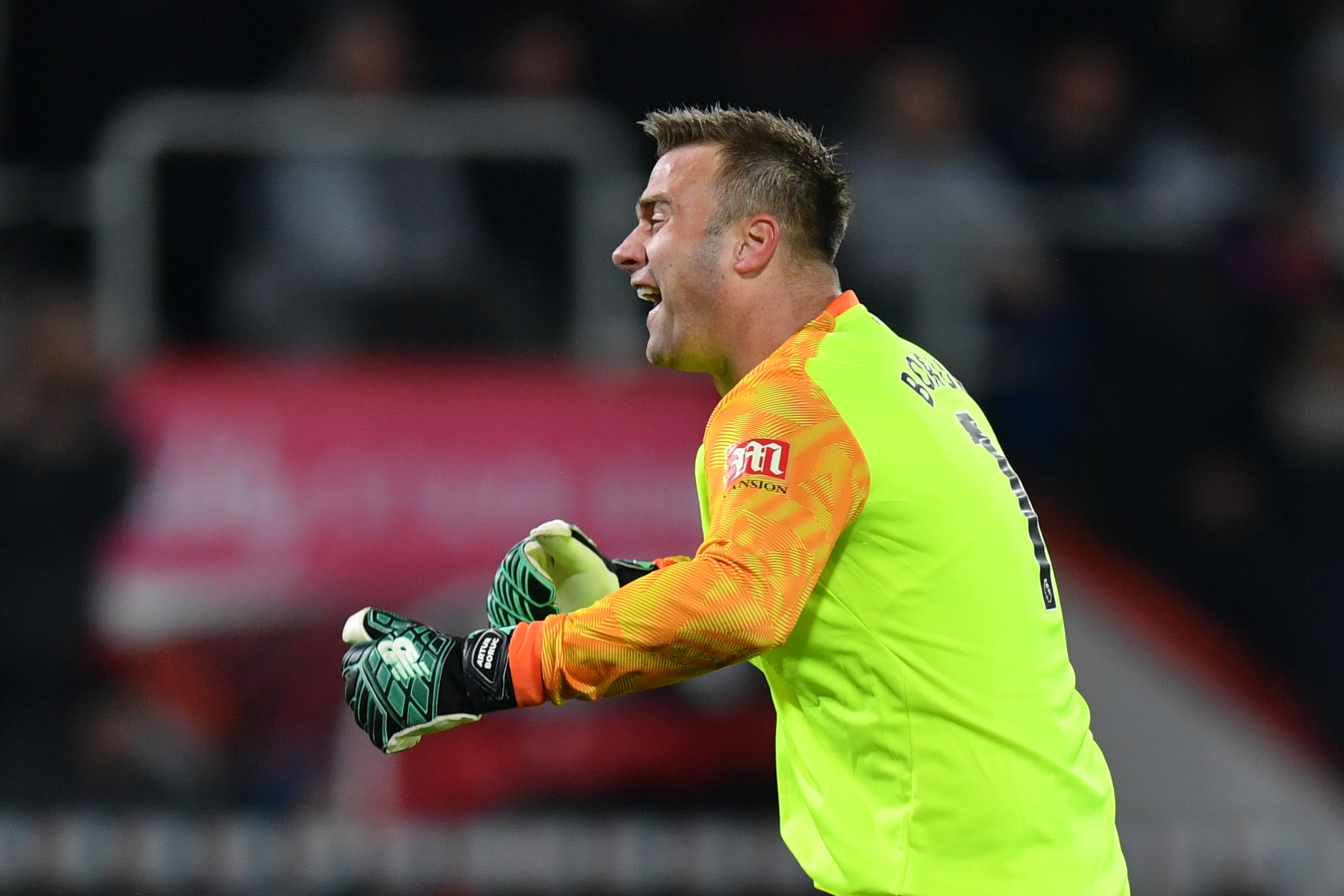 A cross from Eden Hazard causes danger. The ball comes off Steve Cook but Artur Boruc gets down low quick to keep the clean sheet intact!

A final change for Chelsea

Vitality Stadium is rocking and the fans are absolutely loving it! A fantastic ball from Nathaniel Clyne down the right wing reaches Junior Stanislas. He puts it on a plate for Joshua King who hits the back of the net again for 3-0! WOW!

Surman picks up a booking

Adam Smith is judged to have committed a foul, but Andrew Surman sees yellow for kicking the ball away.

A standing ovation for David Brooks, who is substituted as he appears to have picked up a minor injury. Jordon Ibe replaces him as we head into the final 20 minutes 2-0 up!

Not a dream league debut for Gonzalo Higuain, who is replaced by Olivier Giroud as Chelsea make another change.

COME ON! David Brooks intercepts a rare, misplaced David Luiz pass, before playing a one-two with Joshua King, composing himself, cutting onto his left foot, and finding the bottom right corner! There are shouts for offside from the Chelsea defenders, but the goal stands and we're 2-0 up! GET IN!

Willian comes on to replace Pedro for the first substitution of the match.

A well timed ball over the top of the Cherries defence from Pedro is received by N'Golo Kante, but a poor first touch lets him down and Artur Boruc smothers.

It's going to be a long second half if we're holding on to a 1-0 lead for all of it! Not a bad position to be in against Chelsea though!

The goal that opened the scoring! 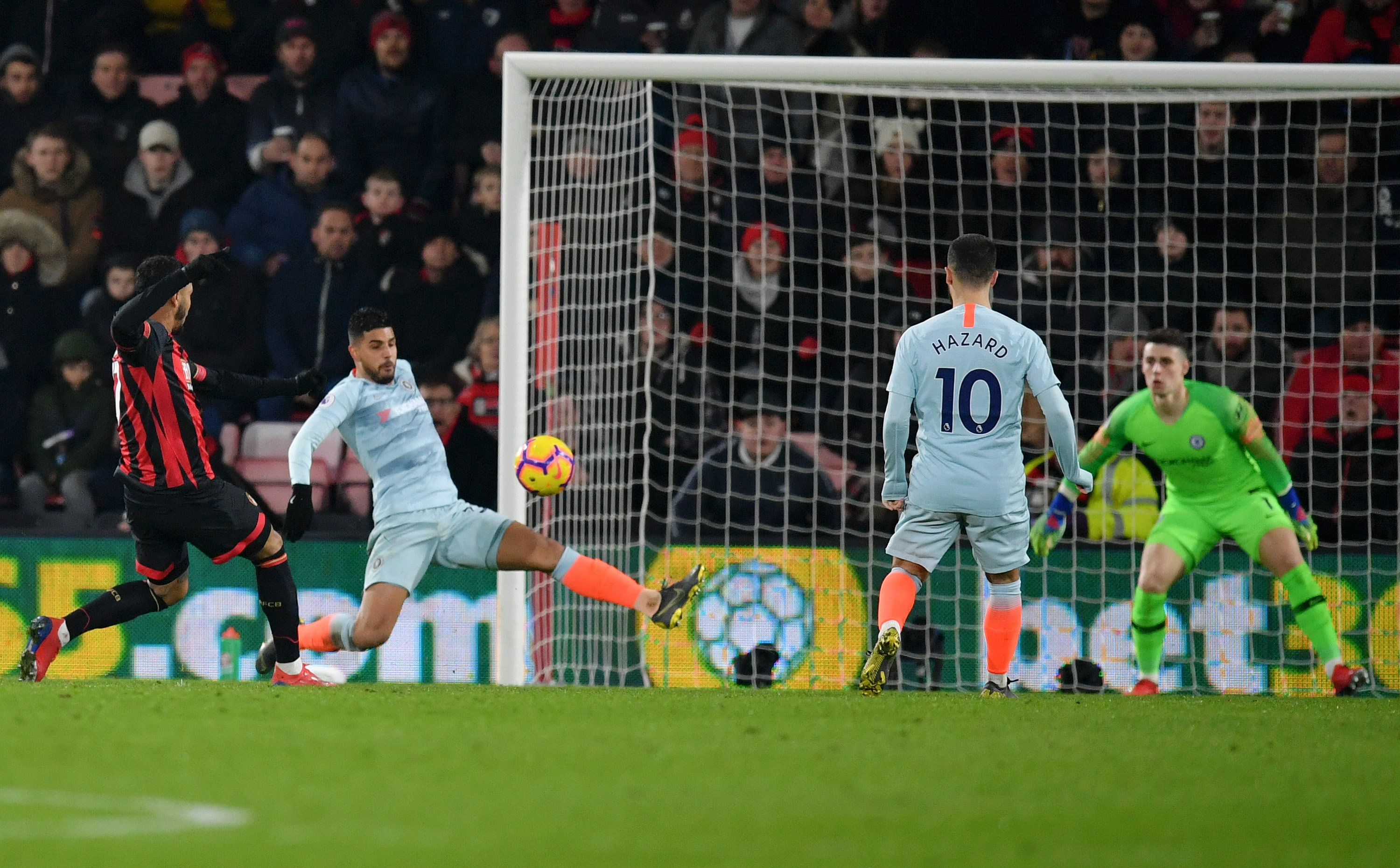 What a great start to the second half! Ryan Fraser scoops the ball over the top to David Brooks, he pulls it back to Joshua King who hits it first time into the roof of the net. 1-0!

Back out for the second half

It was a lively end to the first half, let's hope for more of the same!

We go into the break level

We started the first half slowly but have grown into it late on! No finishing touches from either side yet, but you sense there could be goals in this game after the break.

Stanislas almost profits from the counter!

With the crowd behind them, Joshua King wins the ball deep in his own half, takes on two players and plays in Junior Stanislas whose first time strike is driven straight at Kepa. Great noise in the ground now as we've upped the ante just before half-time!

The Cherries almost covered every blade of grass with a slick passing move from left to right and front to back! It culminated in a Nathaniel Clyne cross being caught comfortably by Kepa, but it got the crowd going!

Brooks goes on his own!

David Brooks wins the ball off Eden Hazard in Bournemouth's half and runs the length of the pitch before going for goal. At the other end, Cesar Azpilicueta cuts onto his left foot and curls a shot towards the far corner, but Boruc dives well to save. Still goalless!

A signal of intent from the Cherries!

A short corner from Ryan Fraser goes to David Brooks, who returns it to Wee-man. The cross is then headed clear by Gonzalo Higuain, before Adam Smith lofts the ball back into the danger area to Steve Cook on the right. Cook crosses the ball to Joshua King, who heads it to Brooks, whose header is saved by Kepa Arrizabalaga!

The away side are having all of the ball at the moment. David Luiz has been an instrumental playmaker, starting all of the moves from the back, while we've not been able to keep hold of the ball when we win it back. Still level though!
20'

Surman has our first chance

The Cherries get their first sight of goal and it comes from the right wing. Junior Stanislas plays it inside to Andrew Surman, who works the ball onto his favoured left foot and strikes from distance, but his shot clears the bar!

Eden Hazard shows off his excellent close control of the ball midway through the Cherries half, before having a go from distance. The shot doesn't have enough power or precision to trouble Boruc though!

Boruc tips it onto the bar!

Big save from our big Pole! A cross swung in from the right hand side is headed goal-wards by Mateo Kovacic. It's going in but Boruc stretches and parries it onto the crossbar!

Luiz takes a fierce strike to the face

Joshua King rockets a shot from distance, but it slams into the face of David Luiz who is down and receiving treatment.

Here we go then!

The Cherries get us underway!

Vitality Stadium impeccably observes a minute's reflection for Emiliano Sala and pilot David Ibbotson, after the Cardiff City player was reported to be aboard a missing aircraft last week.

The noise is building!

It's five minutes until kick-off, the teams are getting ready to come out of the tunnel, and Vitality Stadium's four stands are making noise for the boys!

The boss on tonight's absentees

The boss updates on Wilson and Lerma... 💬

"Losing two players like Callum and Jefferson is a big blow.

"Callum's had a minor knee operation to clean it out and Jeff has an ankle problem, but we are positive going into tonight's game."#BOUCHE pic.twitter.com/QPyJHSvcxm 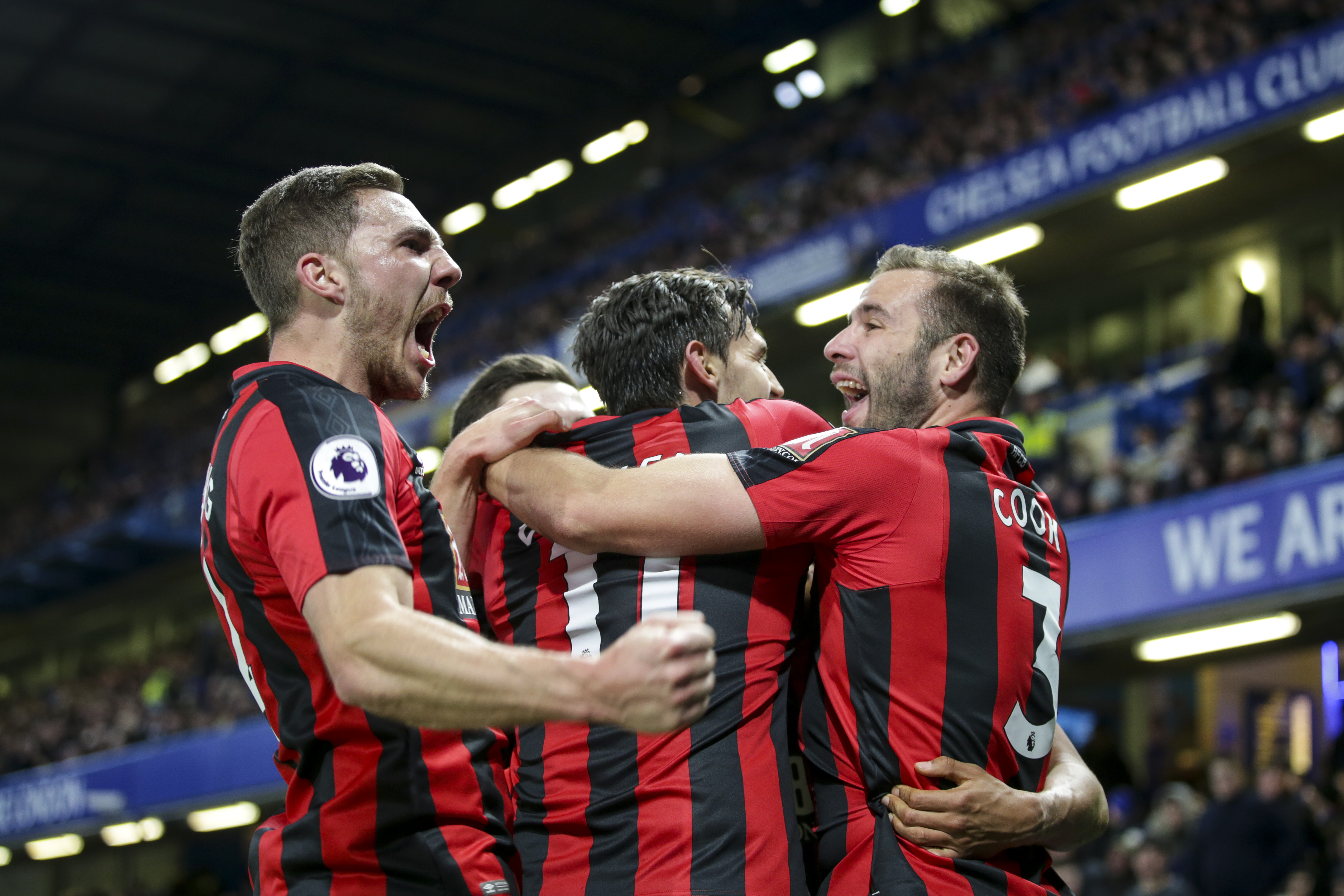 We might still be searching for a first home win over Chelsea in the Premier League, but we have beaten them twice at Stamford Bridge. In total, our Premier League head-to-head record with the Blues is two wins and five defeats.

Chelsea's one to watch 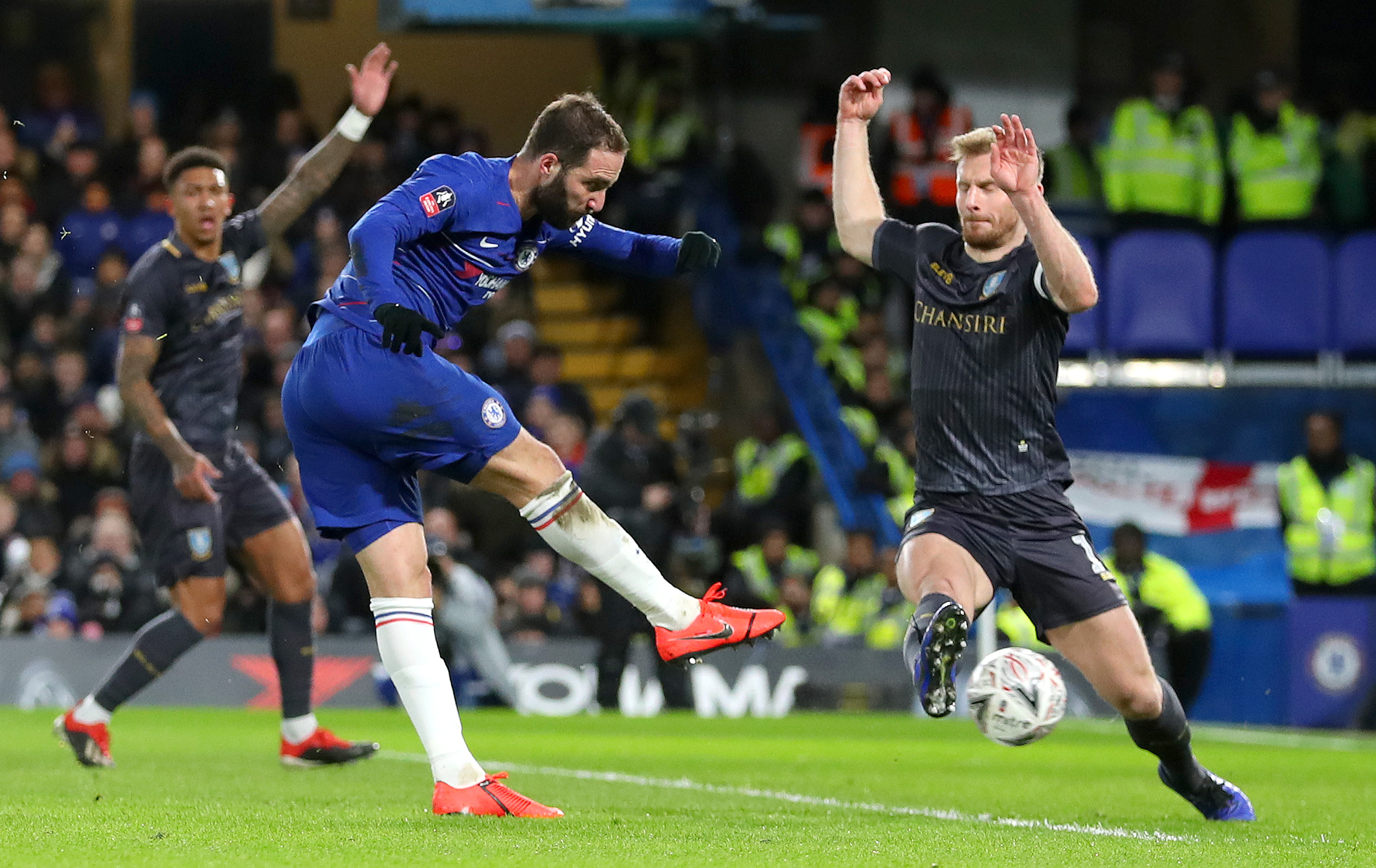 Making his Premier League debut tonight for Chelsea, all eyes will be firmly on Gonzalo Higuain, who recently signed on loan from Juventus.

The Argentine international has been brought in during a difficult season for Alvaro Morata. Chelsea fans will be hoping that, besides scoring goals for himself, Higuain can help bring the best out of Eden Hazard in the number ten role behind him.

A ground Chelsea have enjoyed visiting 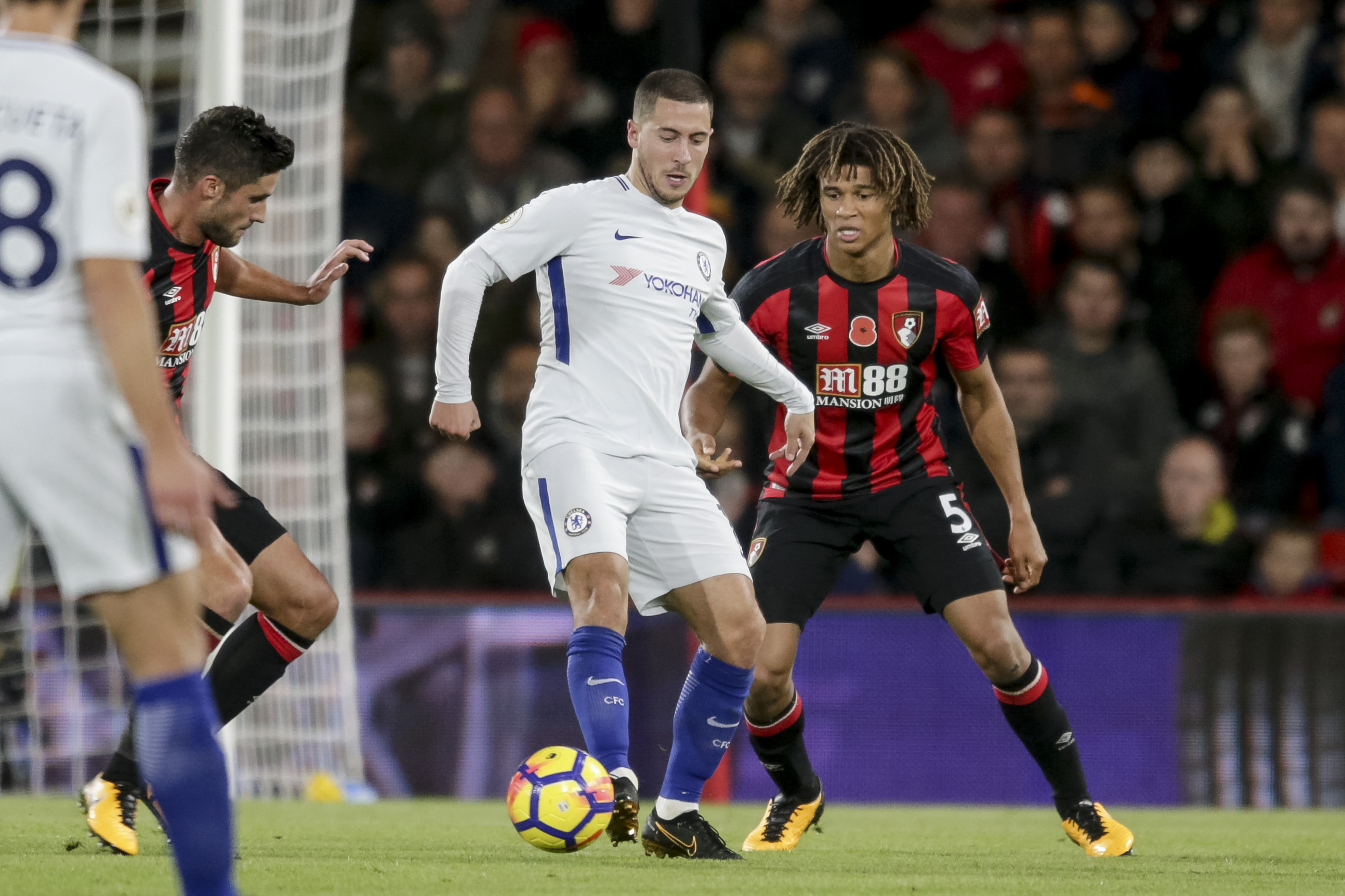 Chelsea have won every time they have played at Vitality Stadium since Bournemouth were promoted to the Premier League in 2015/16. Although that stat doesn’t bode well for the Cherries, last season we stayed in the game and only fell to a 1-0 defeat.

Needless to say, we’ve enjoyed some great results against Chelsea at their ground! Let’s hope we can end our disappointing record against the Blues at home tonight!

Higuain starts for the visitors

This is your Chelsea team to play Bournemouth! 💪#BOUCHE pic.twitter.com/jor5gZbKhx 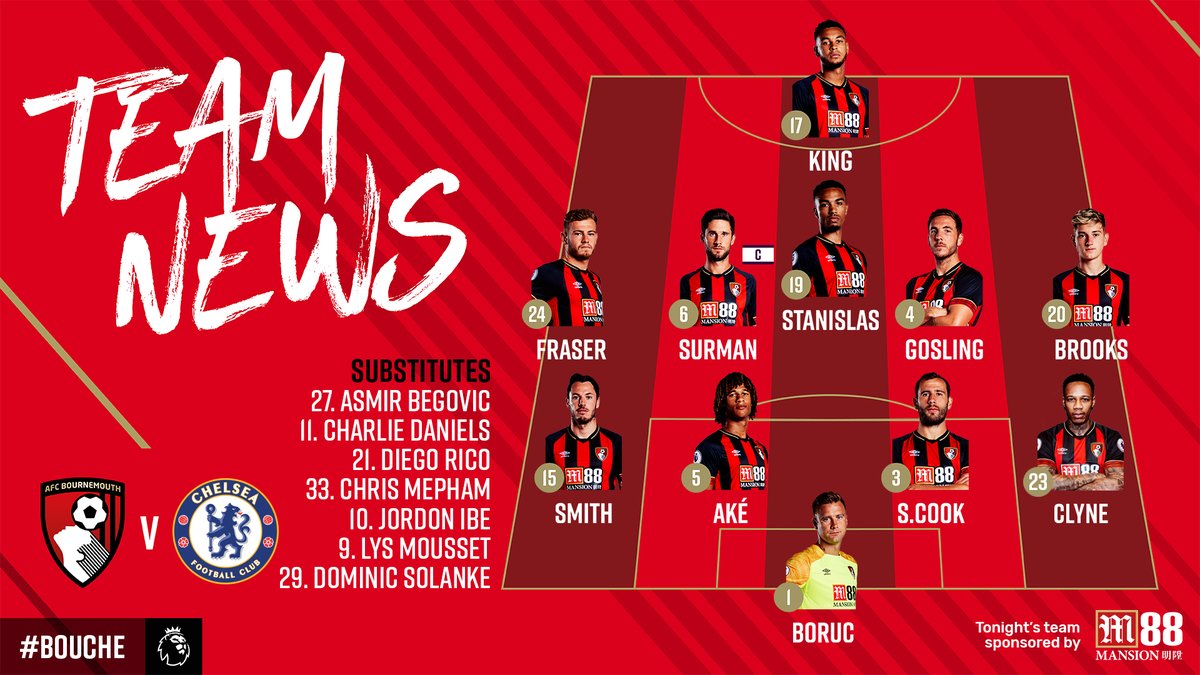 Willo and Kris Temple will be providing live audio commentary for the game as always. Click LISTEN LIVE to tune into their coverage!

Home is where the points are

Vitality Stadium has been a fruitful source of points for us this season, as Bournemouth have the sixth-best home record in the league. Of the 12 games we’ve played at home so far this season, we’ve won six of them and picked up 21 points!

While we’re on the subject of promising stats, we mustn’t forget to mention Ryan Fraser, who is joint-third in assists (nine) for Europe’s top five leagues this season! The only two players above him in the chart are Eden Hazard and Lionel Messi!

Wilson a doubt for tonight’s game 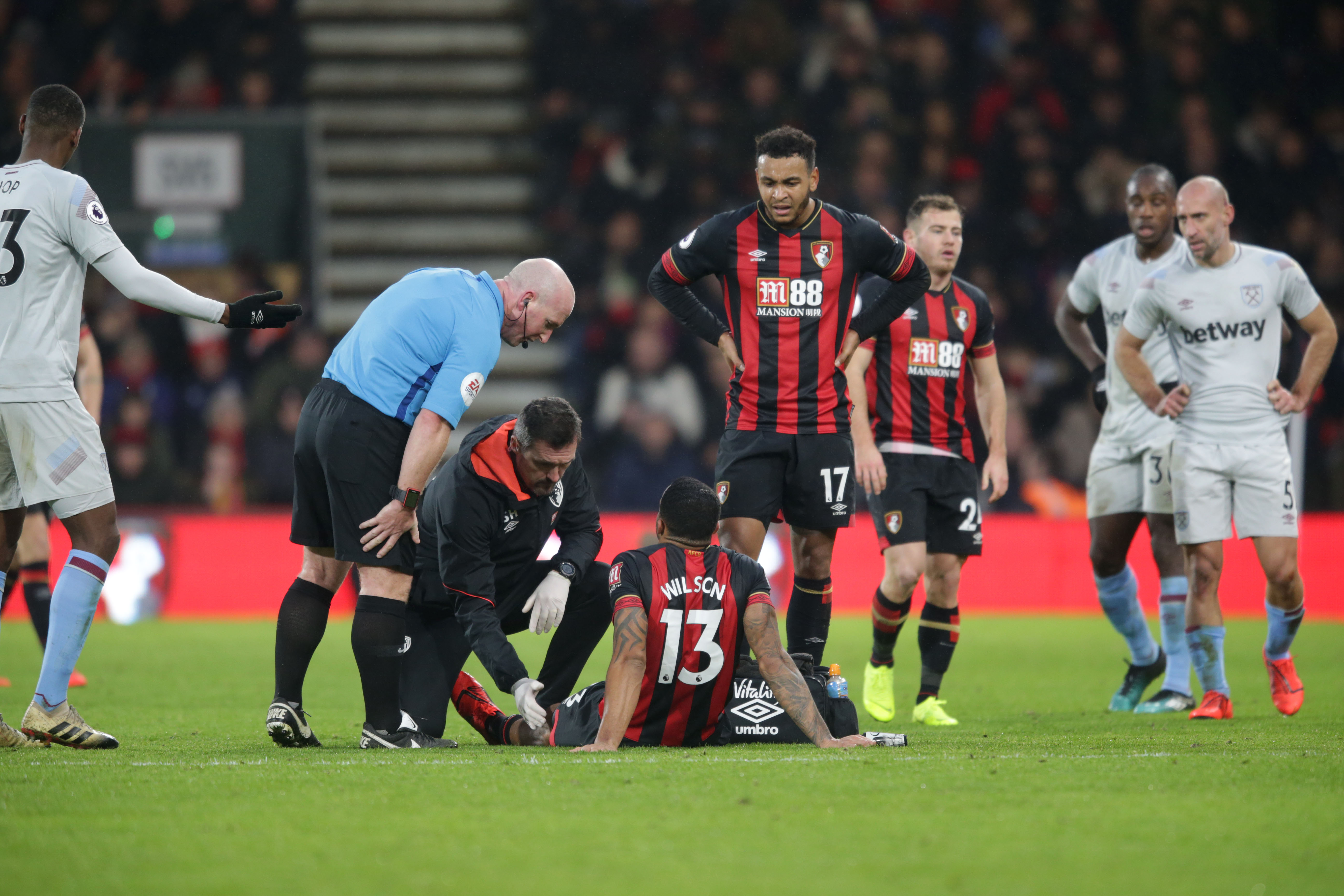 As for injury news, a late call will be made on the fitness of Callum Wilson, as Eddie Howe said that the Cherries striker is carrying a knee problem.

“We’re going to give him all the time he needs to try to get fit for this game,” Howe said. Elsewhere in the squad, new signing Dominic Solanke is still recovering from a hamstring problem, but Chris Mepham could make his first start for Bournemouth after signing from Brentford last week.

Full team news will be announced here at 6:45pm.

"With his age and the experience he's had in the Championship, his career has been really good to this point. We look forward to developing him further," Howe said. 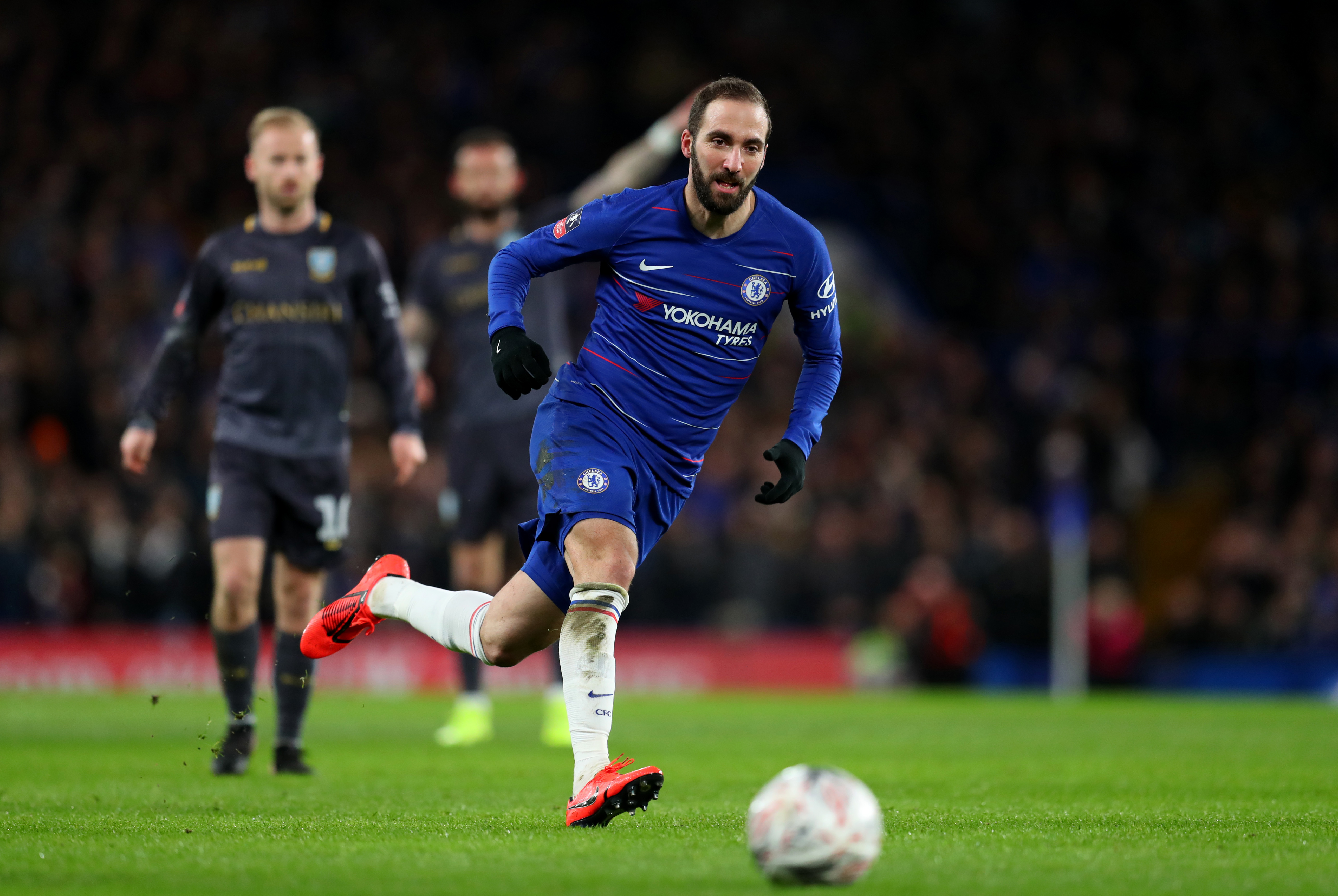 The games have been coming thick and fast for Chelsea in 2019, who are still competing in the EFL Cup and FA Cup. Their league form in January is the same as Bournemouth’s – one win, one draw, and one defeat.

In domestic action, the Blues have been flying, comfortably beating Nottingham Forest in the Third Round and Sheffield Wednesday in the Fourth Round of the FA Cup, as well as knocking Tottenham out of the EFL Cup across a two-legged semi-final.

Mixed form for us 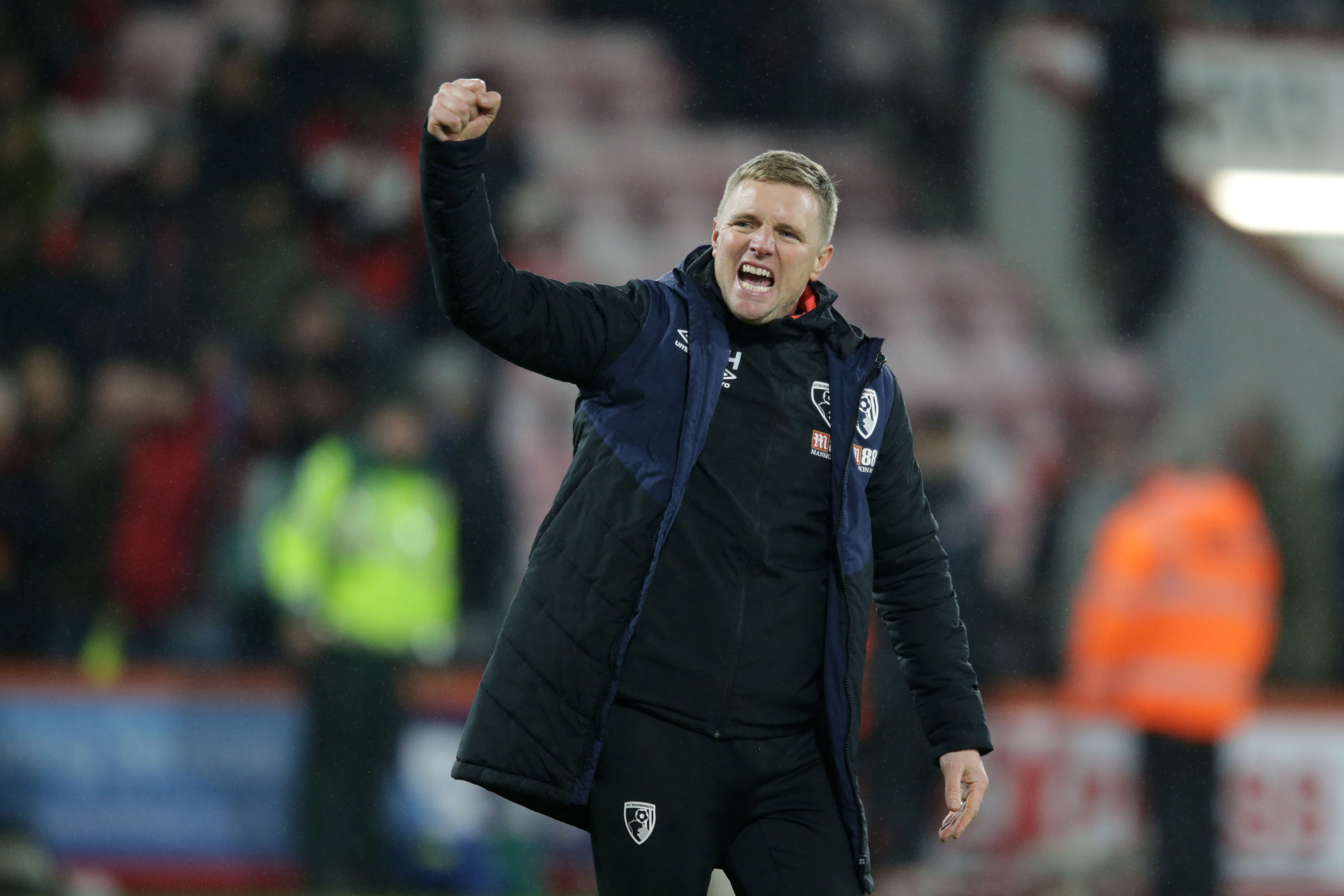 January has been a mixed bag for the Cherries, as we’ve picked up four points from a possible nine in the league. We drew with Watford at the start of the month and then lost at Everton, before most recently picking up three precious points at home to West Ham almost two weeks ago.

That form puts us in 12th place in the Premier League ahead of tonight’s game, but a win tonight could take us into the top half of the table, depending on results elsewhere! Let’s end January on a high!

Welcome to the live blog!

It’s been a glorious day on the south coast, and AFC Bournemouth are back at Vitality Stadium for tonight’s Premier League game with Chelsea! Kick-off is at 7:45pm, and we’ll be bringing you all the pre-match build up as well as the live game coverage.

Team news will be revealed here at 6:45pm, and we’ve got plenty to cover until then!