Disappointing in the sense of we were really unlucky not to get three points.

But the positives - a clean sheet and a point on the board.

Thank you for following our updates this afternoon, not our day but positives to take!

We deserve all three points, but have to be careful of a Leicester counter.

Weeman is on for Junior.

A good display from Junior, particularly in the first half.

Surman gets it from deep again and curls an accurate effort, it's not bad, but easy for Schmeichel.

Still attacking with plenty of numbers!

JD comes off to huge applause.

Benik is on to replace him.

Can he be the Cherries' hero?

Lewis Cook slips in a lovely ball for Defoe, the striker looks set to shoot but Schmeichel smothers it.

Ndidi blasts one and it comes off Ake and deflects narrowly past the post.

Almost a slice of luck for the Foxes.

Stanislas cuts in from the left and zings an effort which Schmeichel has to punch away! Still all us, come on lads!

Defoe was shoulder charged in the box but nothing was given.

A threat from the bench.

King lays off Surman and from 20-yards, he tries to curl one into the top corner.

It is so close! An inch away!

Can we get that crucial goal? 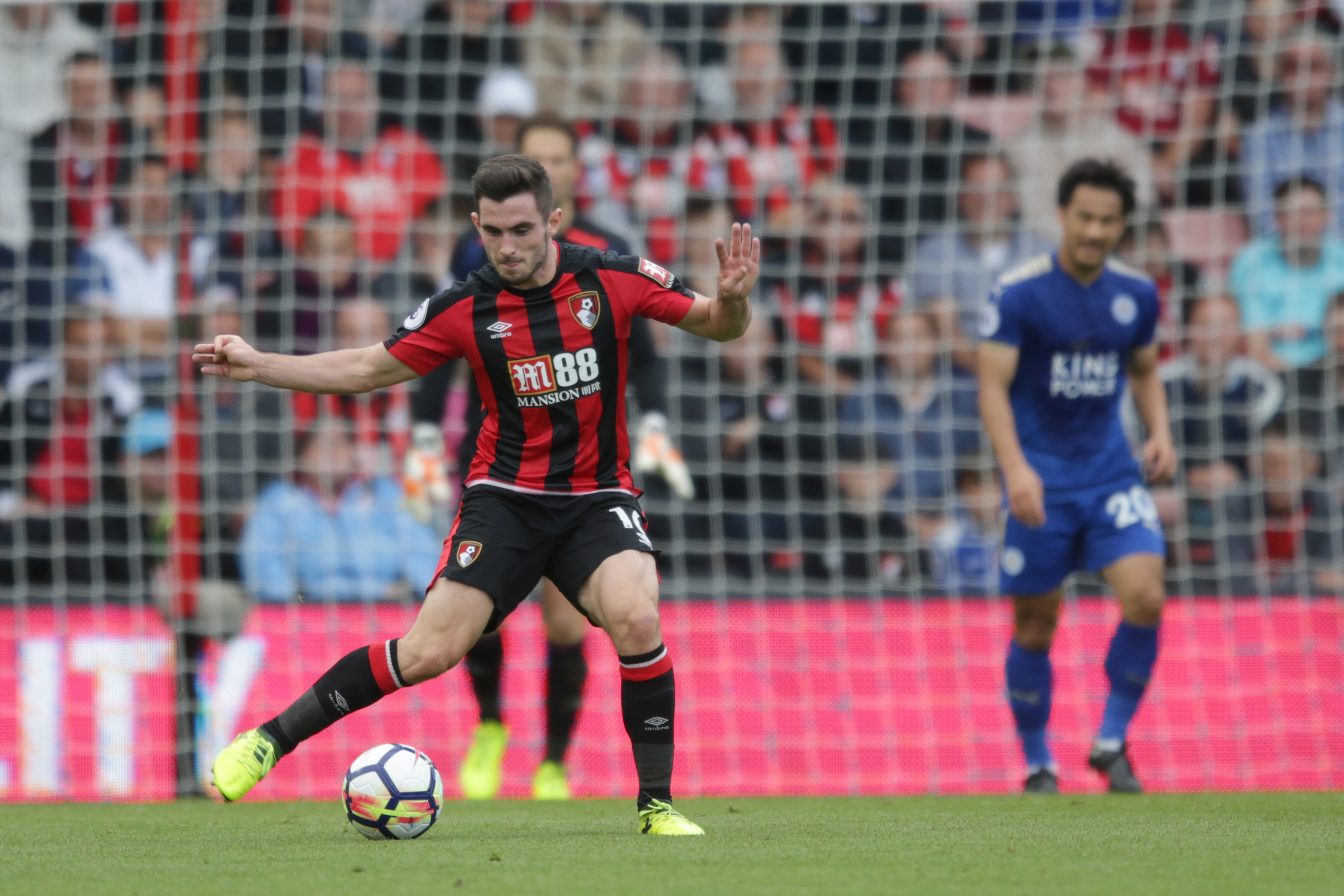 That was Pughie's last action as Ibe comes on to replace him.

Leicester have made a change, Okazaki, who missed that glorious chance, is off for Iheanacho.

Junior is now on the left, Ibe on the right.

Cuts inside and curls one, trademark Pughie!

But it curls just a bit too much and flies beyond the right-hand post.

He smashes one from range and it's not far away at all!

A massive chance for Okazaki.

A dangerous ball into Vardy is only half cleared and Okazaki should have buried it, unmarked, eight-yards out.

Somehow, he fizzes it wide.

Despite our dominance, a huge let off. 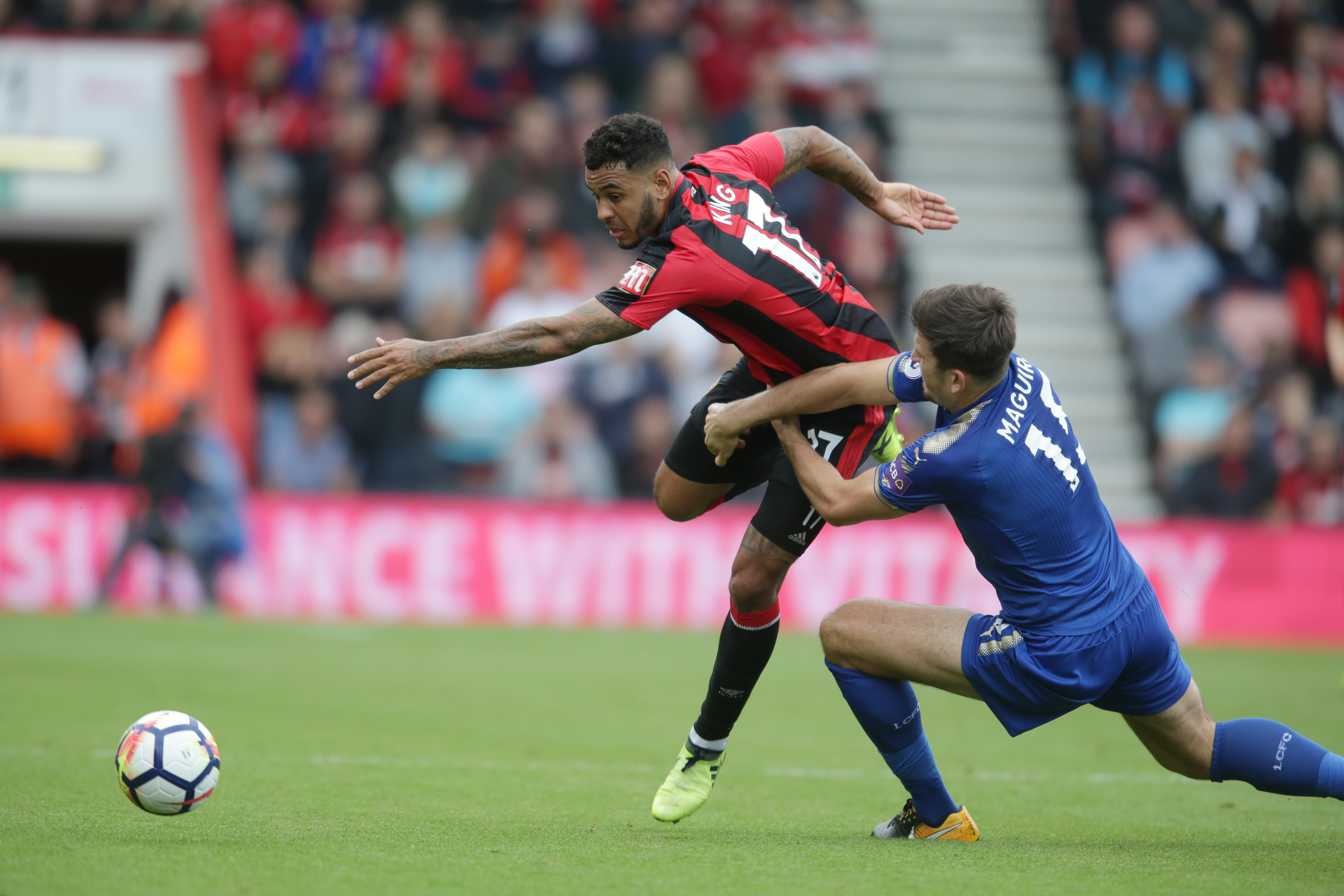 Great atmosphere.... fans behind the goal trying to such the ball in!

Another well worked move sees Stanislas get the ball 25-yards out, his strike is well hit, low and firm but Schmeichel makes a comofrtable save.

He holds the ball up well on the left and feeds Kingy on the edge.

King shoots but he mis-hits the strike and it trickles to Schmeichel.

A good opening though!

Half time sub for the Cherries...

Iborra has plenty of experience, a Europa League winner three times with Sevilla.

But what a good half, so unfortunate not to have a goal to show for it, but at the break it's 0-0.

Plenty of chances. Can we make one count on the stroke of half time?

Cook plays a lovely ball down the line for King, he fizzes in a cross whih is half cleared.

Pughie latches onto the rebound but his effort is well blocked in the box.

Should be a corner - referee says no. Another great opportunity! 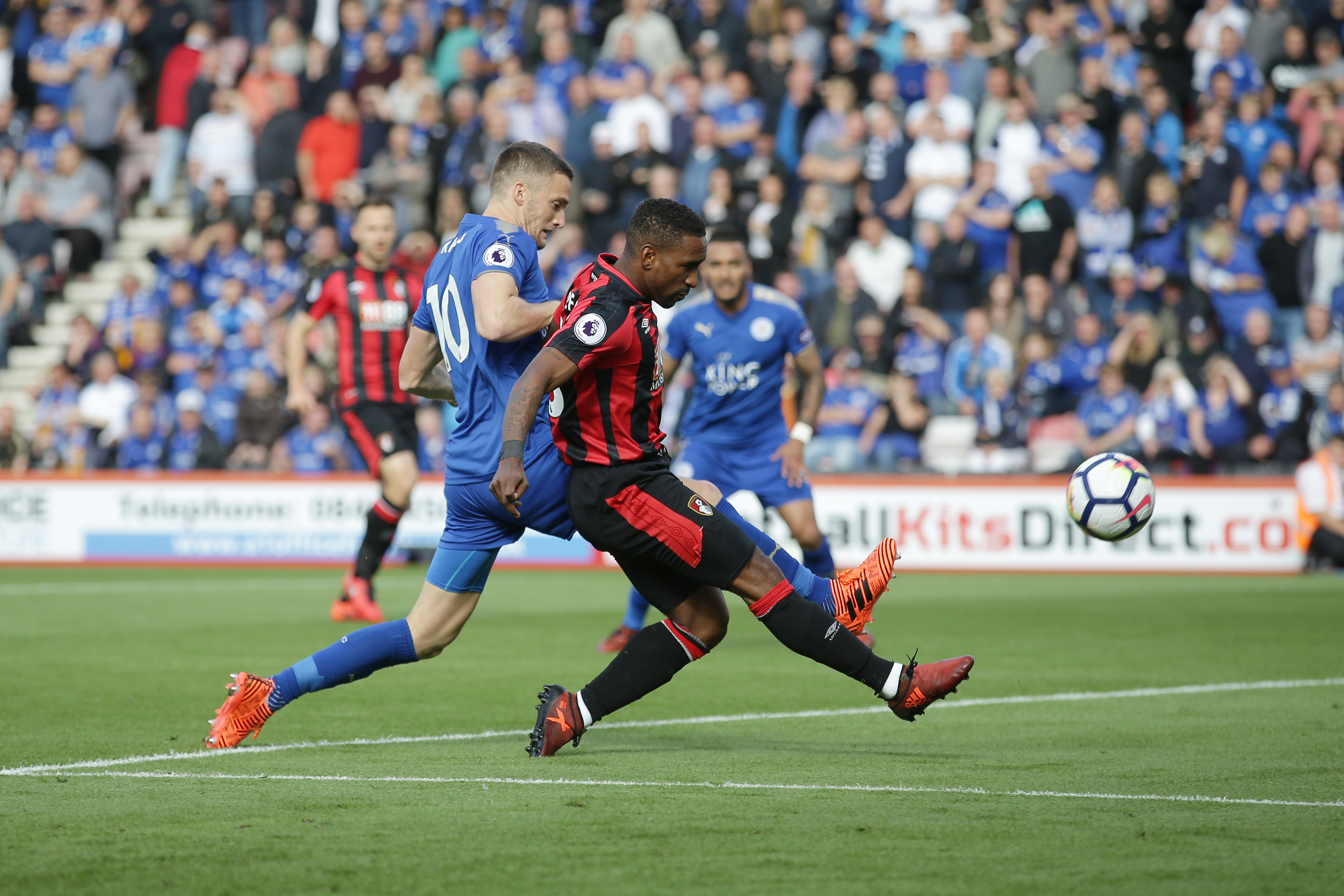 Lovely idea from Surman to slip JD in but Schmeichel is alert to it and comes out before it reaches the striker for a certain goal.

Junior whips in another delightful ball from the right and it narrowly evades Ake waiting in the middle.

We're still on top, but it's not as intense as those crazy ten minutes. Leicester have settled.

We start a break and Pughie gets in the area, lays off Kingy perfectly but the striker unfortunately miscues and hits a low effort in the box wide!

We start a break and Pughie gets in the area, lays off Kingy perfectly but the striker unfortunately miscues and hits a low effort in the box wide!

He lost the ball to Albrighton, who then beat him - but Pughie hauled him down.

Kingy has been lively so far... 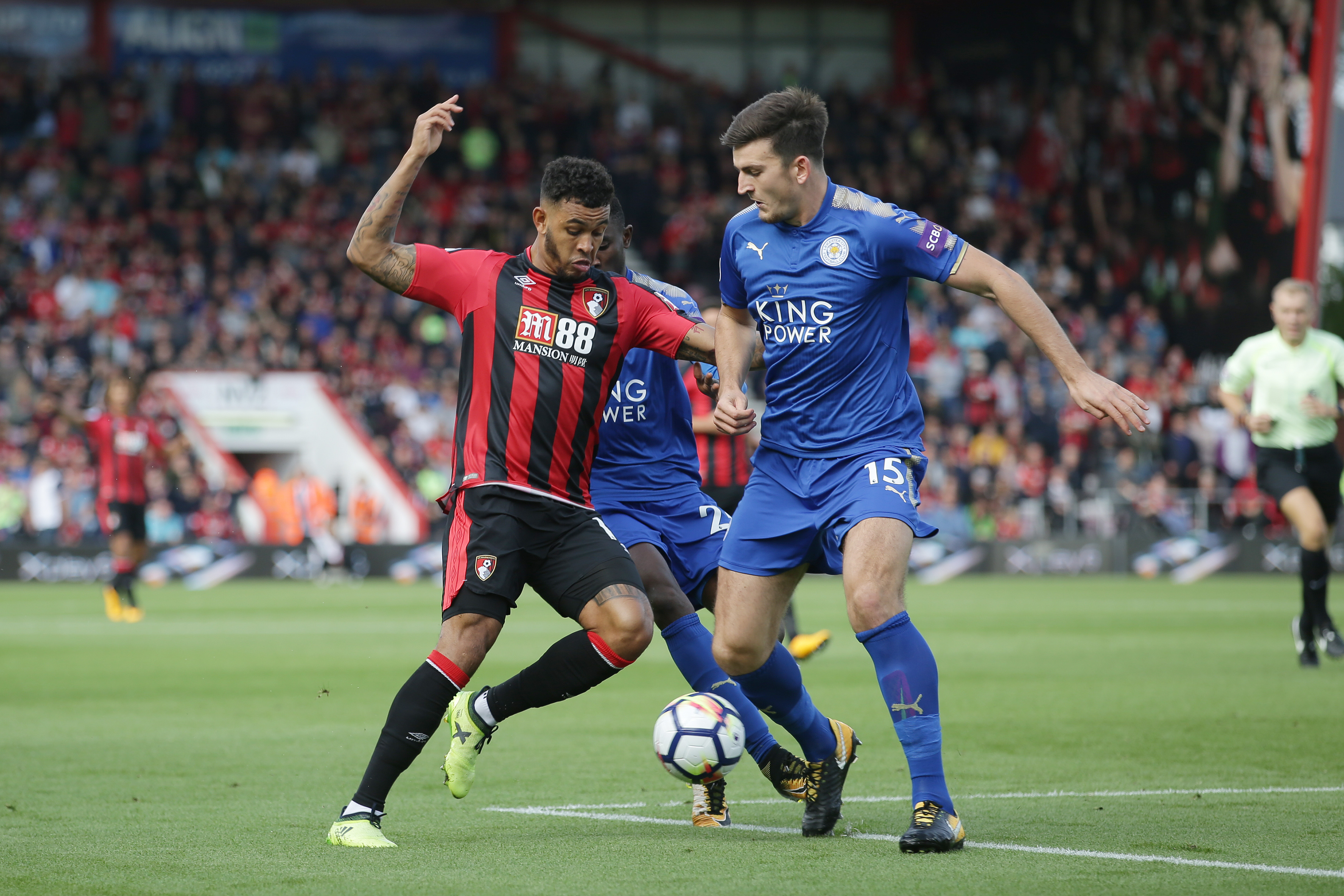 We'll keep you updated via text, but if you want audio, click listen live and login for free.

Junior is enjoying himself!

He picks up the ball out wide and drills in a low cross which is deflected from Pughie who is waiting at the back post!

What a start he's had to the game.

We have been excellent.

A great start, just so unfortunate not to have a goal to show for it.

The fans are right behind the boys too!

King does so well!

He skins two men on the left and gets in the box, but his low effort is well saved by Schmeichel!

What a ball from Stanislas!!!

He releases Defoe from in his own half and Wes Morgan does well to prevent the serious threat, but JD lays off Pughie who smashes a low effort unmarked wide.

A great start from us, so unfortunate not to be ahead!

IT'S OFF THE BAR!

King and Defoe combine and JD hits the underside of the bar in the six-yard box! You don't get closer than that!

Then on the rebound, Pughies looks set to tap in but Simpson appears to handball it to safety! A manic few seconds at Vitality Stadium!

JD kisses the ball, then gets us underway.

The players are out on the pitch!

When the pre-match handshakes are out of the way, it's down to business...

If you're bored of our text updates and want to listen to the Radio Solent crew, then you can for free!

Just click listen live and you will get audio commentary. Might be some spoilers on our text updates though!

Every time we've pointed out a player that's scored on this blog, they've scored in the game.

A reminder of the visitors' team... Vardy is in! 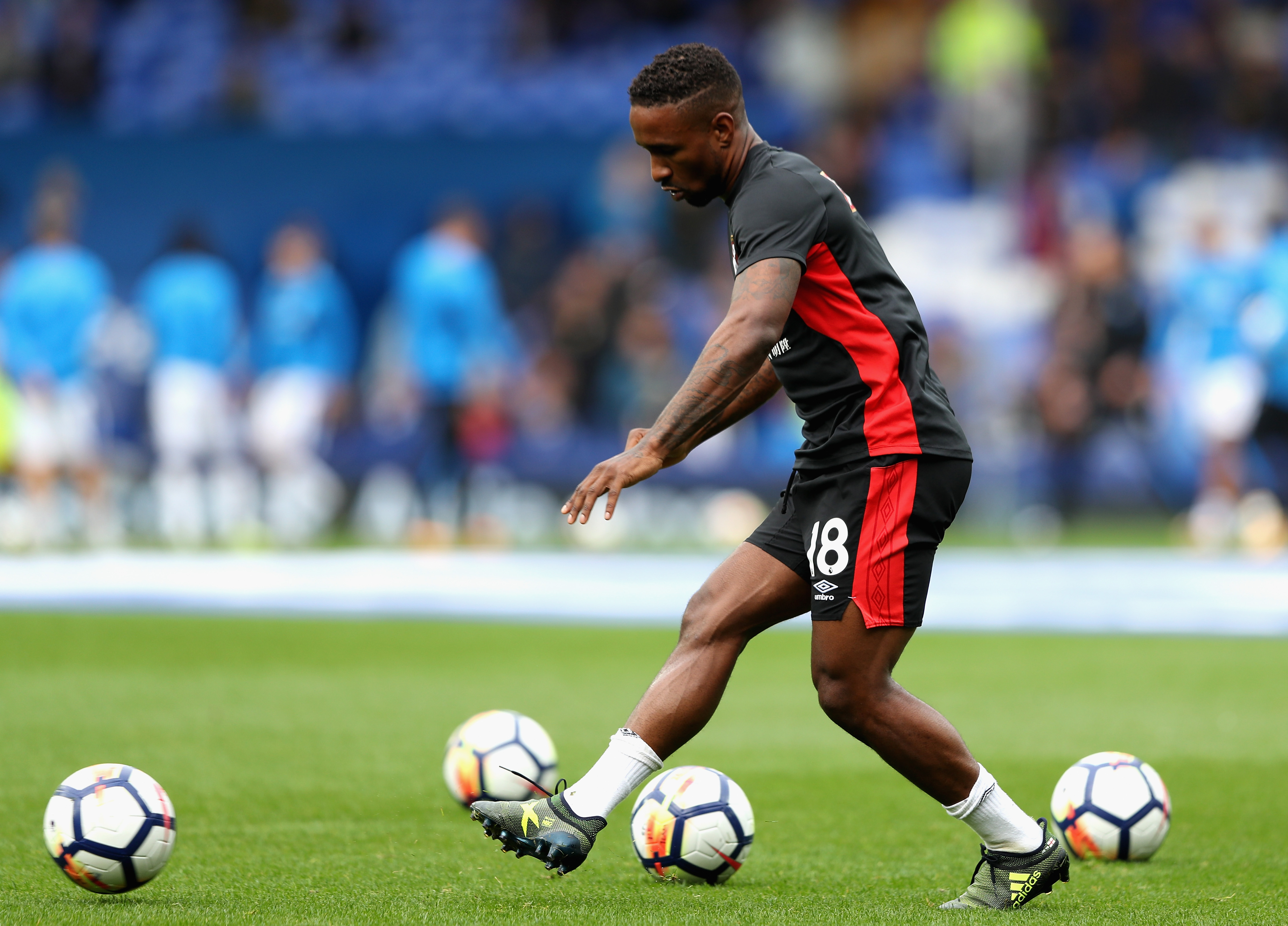 So here's a fact for you!

Jermain Defoe has scored in 135 different Premier League matches during his career - the only players to have scored in more are Alan Shearer (190), Wayne Rooney (153), Andrew Cole (149) and Frank Lampard (149).

What can we expect from the visitors today?

We spoke to James Sharpe of the Leicester Mercury earlier this week to get the lowdown on the Foxes' start to the season.

He said: "They’ve played ok and have been in most of the games, but they’ve just come out on the wrong side.

"At Arsenal they were leading with less than 10 minutes to go but somehow lost, against Manchester United they battled well for 70 minutes and then one lapse of concentration undid them, they were then narrowly beaten at Chelsea, whilst against Liverpool they had a penalty to equalise but missed it.

"The fans are starting to get a bit frustrated because they’ve been OK but they haven’t got the results that the probably should have done." 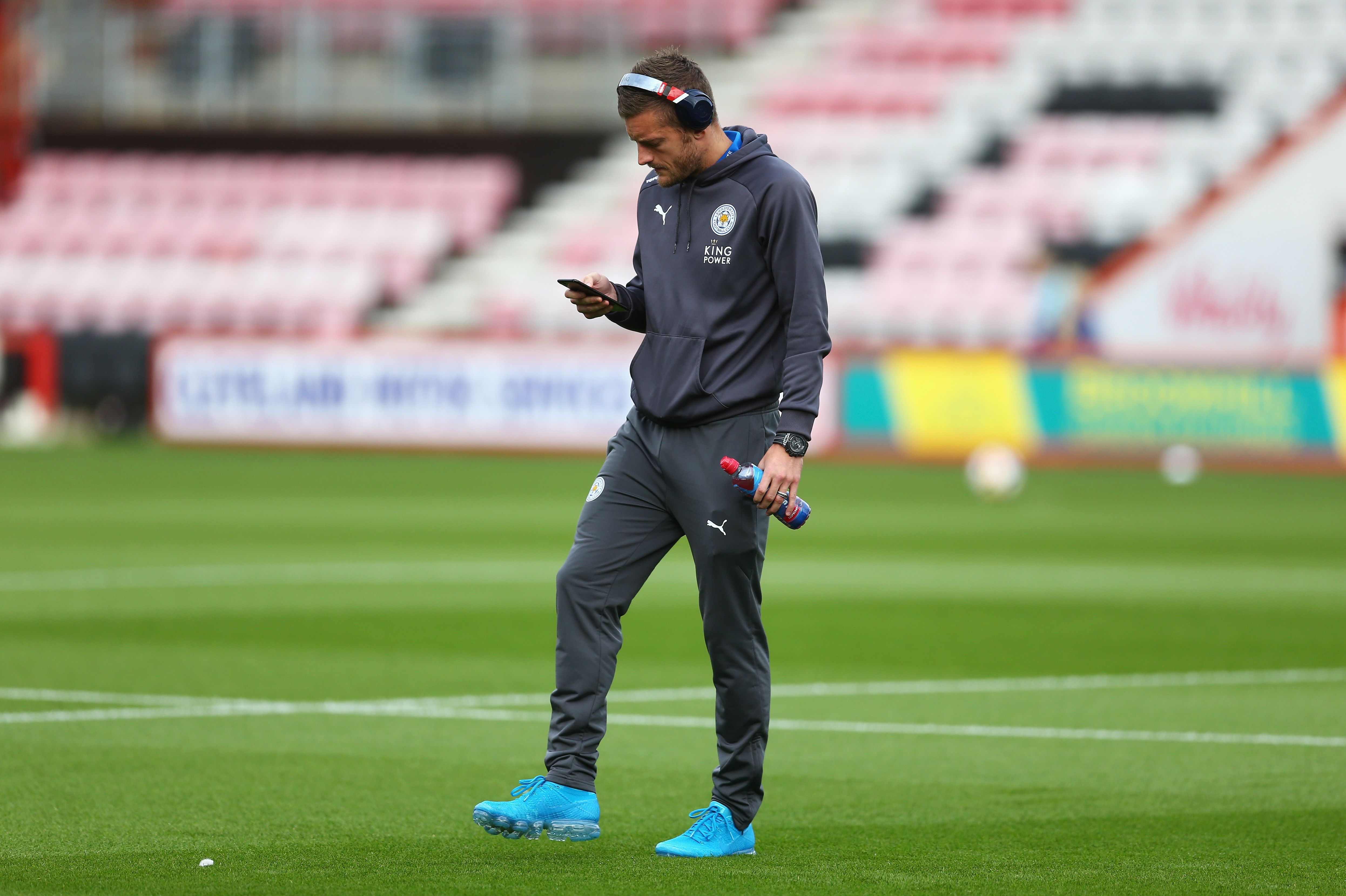 It's an obvious one this week, but for more than one reason.

The England frontman however, was not called up to the Three Lions squad due to injury. So will he be fully fit? I suppose we'll find out!

Time for the team news... 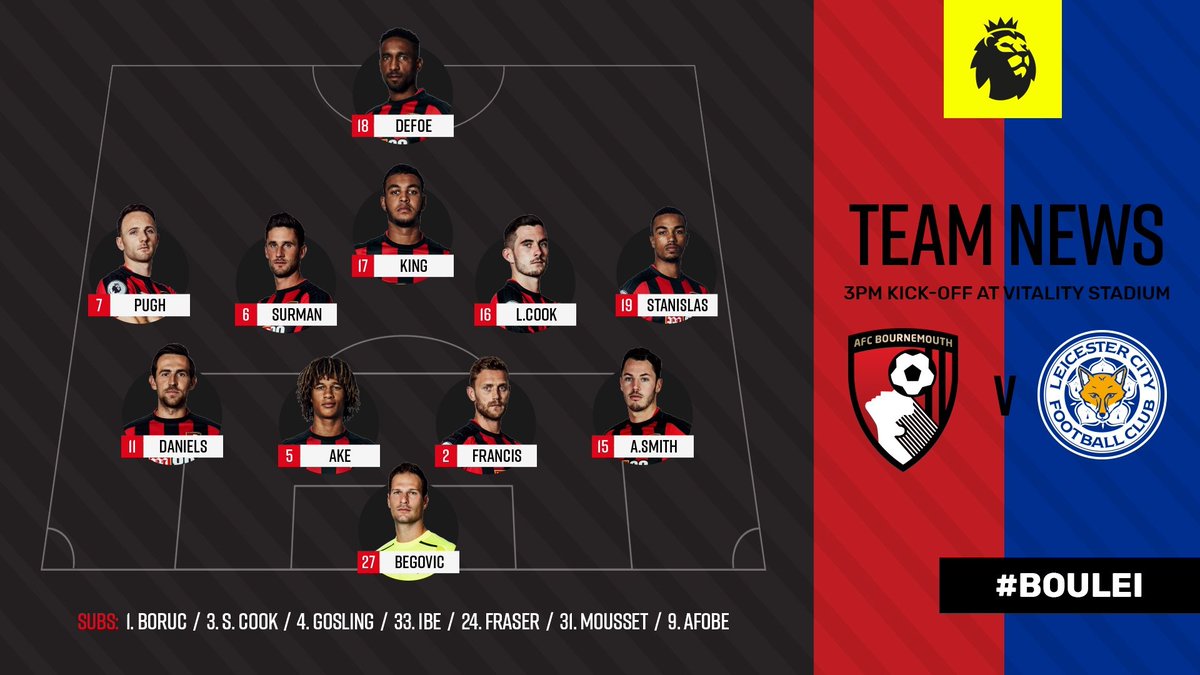 Two changes for the Cherries at Vitality Stadium this afternoon.

There's a first PL start of the campaign for Lewis Cook and Marc Pugh (and his Leicester record) come in on the left.

A good day for Nath!?

Get your predictions in...

Nathan Ake has just given his pre-match interview to the Premier League World Service.

He said: "The last few games have been better and today is another good opportunity to get a win."

Time to bounce back... 💪#afcb 🍒 pic.twitter.com/TfgIoWFkPT

A reminder, you can listen to pre-match build-up and full commentary from today's game for FREE! Simply sign in to your digital account and hit 'listen live'.

Congratulations! A sleepless night I'm sure!

Will we see goals today?

But, the four Premier League matches between the sides have only produced five goals.

A big day for Cook? 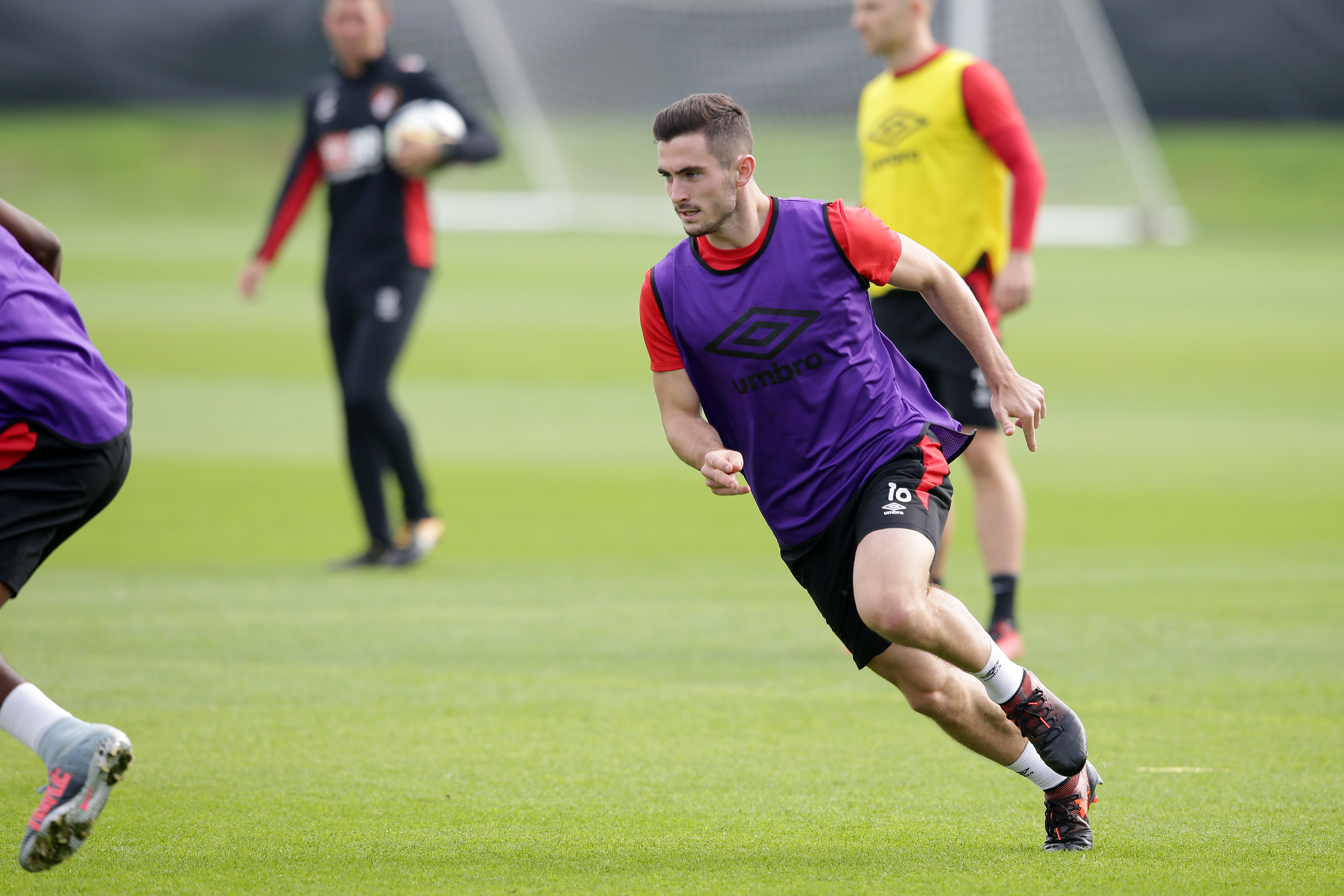 We'll announce team news officially at 2pm, but the manager did say that Dan Gosling is struggling, while Harry Arter is definitely out.

Does that mean a first Premier League start of the season for this man?

It could be his seventh top flight appearance since joining the club. 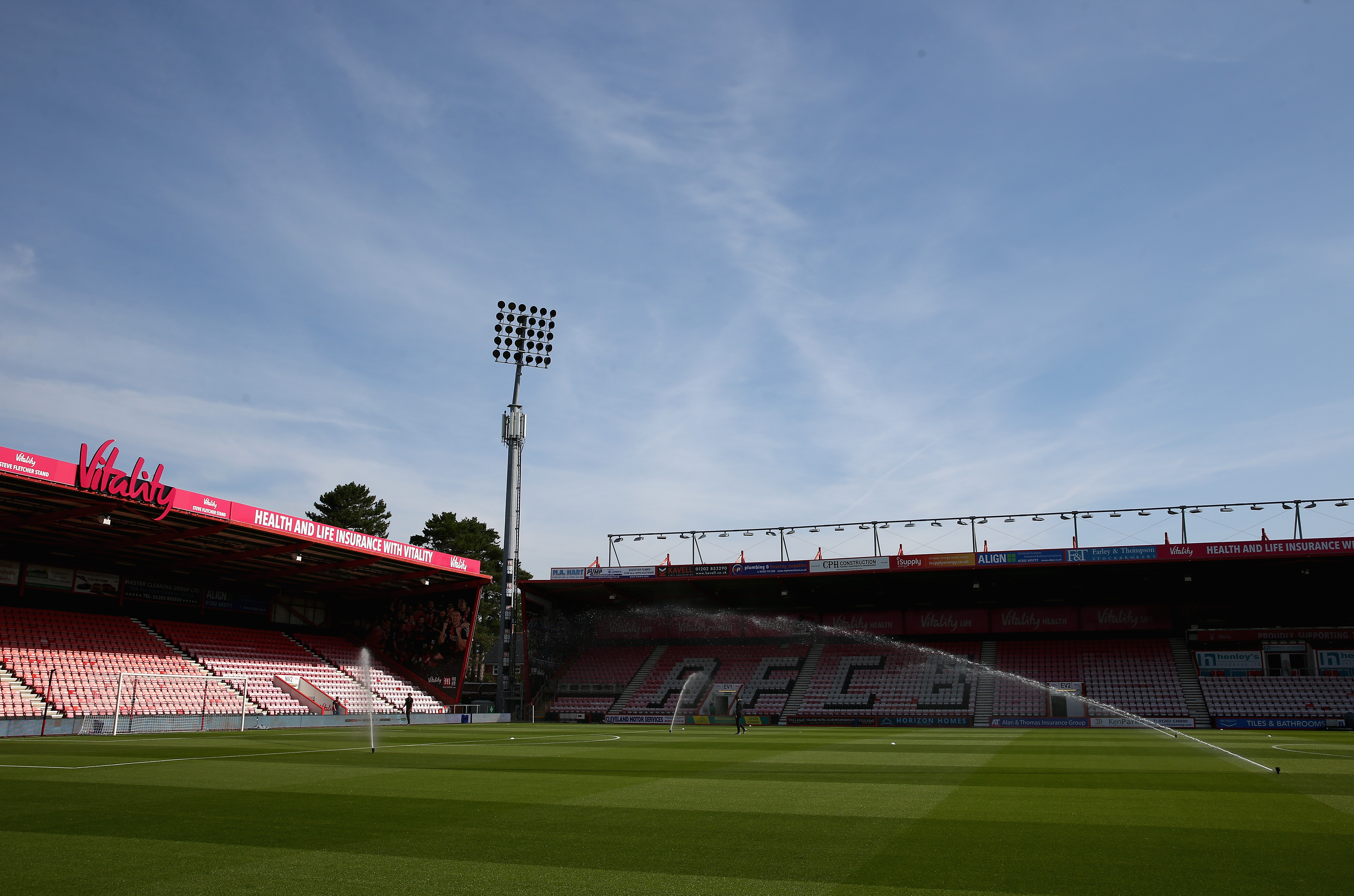 To our live updates from Vitality Stadium!

It promises to be another great Premier League occasion for the Cherries, with more points up for grabs.

Keep yourselves on the blog throughout the day for updates, stats and of course the latest from the game.